I'm Raymond Najjar, a professor of Oceanography in the Department of Meteorology and Atmospheric Science.

Seeking a field where I could apply my love of math and science, I chose an engineering major in college, where I found the study of fluids to be fascinating. I also became interested in the environment and made a lucky guess that graduate study in oceanography and atmospheric science would suit me. After graduate school, I worked for three years as a post-doctoral scholar at the National Center for Atmospheric Research, where I conducted research on the exchange of oxygen between the ocean and atmosphere. In 1993, I joined the faculty in the Meteorology Department at Penn State and have been there ever since.

A lot of my research is focused on the carbon cycle in the ocean, which is important because this cycle influences the amount of atmospheric carbon dioxide, a very important greenhouse gas. I also study the impacts of pollution and climate change (like sea-level rise) on coastal systems. I have worked on numerous regional climate impact assessments, including one that was part of the first National Climate Assessment, as well as several for the commonwealth of Pennsylvania. I am mainly a data analyst, but I also use numerical models and remote sensing. Occasionally, I am lucky enough to go to sea, and have conducted studies in the Sargasso Sea and coastal waters of Antarctica and the Eastern United States.

Here's the research team I led that studied the impact of nutrients in rain on planktonic ecosystems off the coast of Eastern US in 2014 (I am fourth from the left): 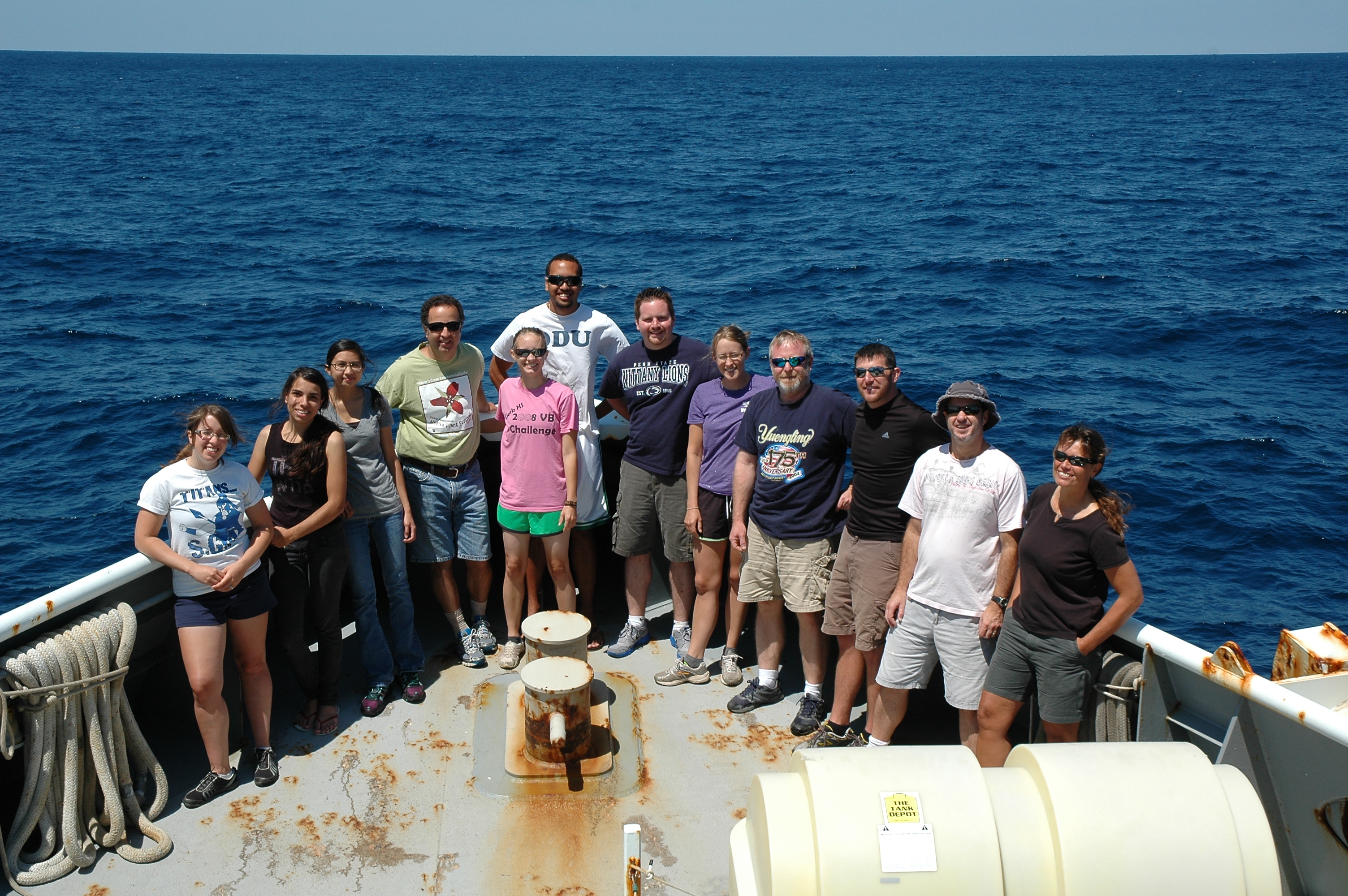 And here is a drifter recovery from that study (I'm second from the right): 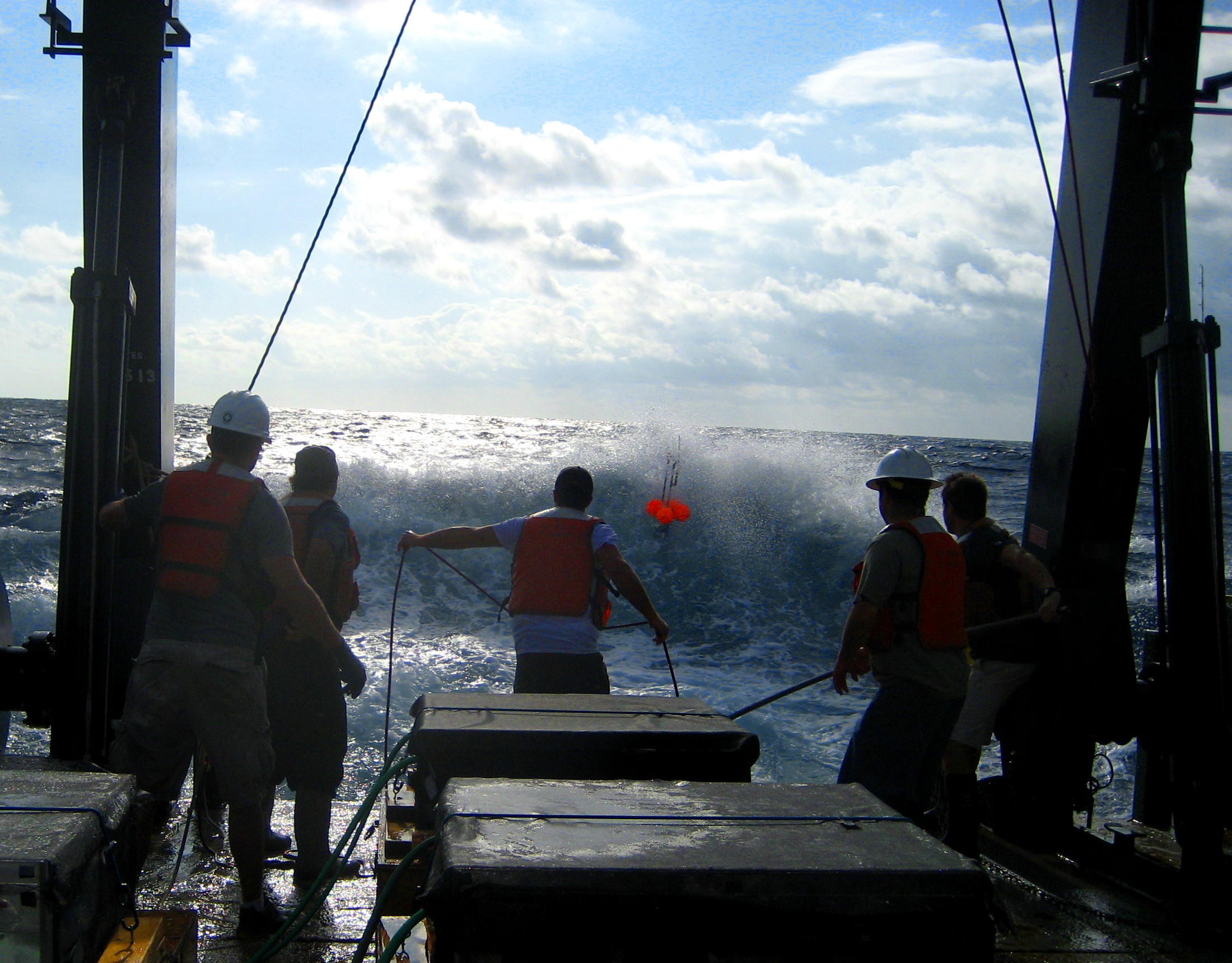 I teach courses in oceanography and atmospheric science. I love teaching Meteo 300 because it is shows how atmospheric scientists use fundamental principles of math, physics, and chemistry to gain a quantitative understanding of a wide variety of atmospheric phenomena. Though I am an oceanographer, I have a passion for studying the atmosphere, not only because of its profound interactions with the ocean, but because we live in the atmosphere and get to experience it every day. One of my greatest pleasures is looking at the sky. 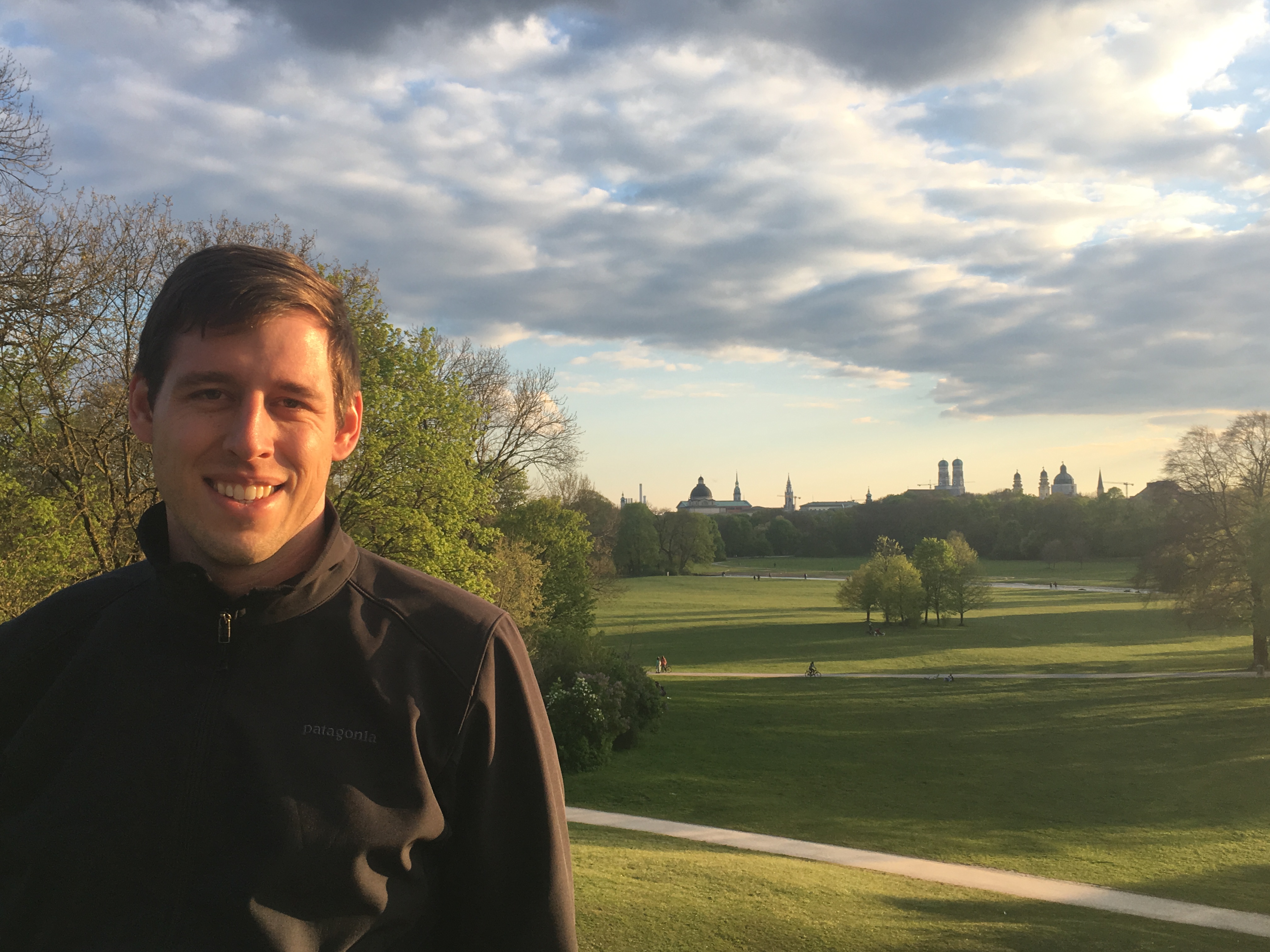 Hi there! I'm Kevin Bowley, an assistant teaching professor in the Department of Meteorology and Atmospheric Science. I've been a member of the Department since 2017, and graduated from the program as an undergraduate in 2009. I spent my intervening time at McGill University in Montreal, with a short stint in New York City along the way. Everybody has a different pathway that brings them to our department. For some, it's a lifelong passion. For others, it's a nice application of the math, physics, chemistry, and/or earth science that they've learned. For others, it's sparked by a life-altering event like a tornado or snow storm. I don't quite fit any of those perfectly - and it's pretty like you don't either - and that's okay! I grew up in Buffalo, New York - where I spent a lot of time on the water sailing in the warmer months and where we routinely had lake effect snow storms in the winter. I like to think that hobbies and day-to-day experiences that were subject to the 'whims' of the weather, combined with a knack for physics, led me to this lifelong passion for understanding how the atmosphere works. It's my hope that this class will help develop your own interest in, and understanding of, the atmosphere!

My research specialization is focued on a field known as synoptic-dynamic meteorology, which really is just describing weather phenomena of a specific time and spatial scale. My specific focus as of late has been on understanding a process known as Rossby wave breaking - essentially, what happens when the waves that we routinely observe in the atmosphere become highly amplified and break, just like a wave on the beach. Why should we care about them? Well, the processes that a normal Rossby wave also has associated with it - rising and sinking motion, precipitation, and horizontal winds - get amplified when that wave breaks. This means that the weather that we experience, which is often called sensible weather, can get pretty extreme! What I'm currently trying to understand is how these Rossby wave breaking events are represented in climate models and how they may change in the future. Though I don't find myself in the field any more, I also had the chance to participate in several field campaigns and student field trips focused on severe convection and winter weather. This included participating in the VORTEX2 field campaign as well as taking a group of undergraduate and graduate students from McGill University out storm chasing (I'm the second from the left): 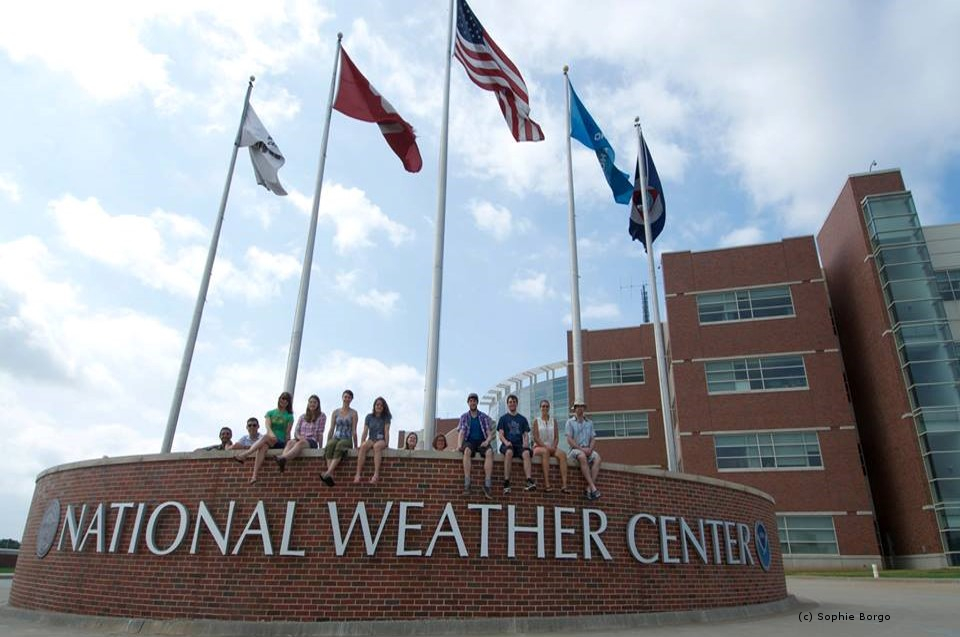 I teach quite a few courses in the Department, so we may see each other many times along your journey to completing your degree! Specifically, I have taught our synoptic, mesoscale, and radar meteorology courses along with our forecasting cirriculum. I've also taught our Principles of Atmospheric Measurements (Meteo 440W) course where a lot of what we learn in 300 gets applied to measure atmospheric variables. I look forward to our time together on this learning journey!

My name is William Brune, a distinguished professor of Meteorology.

The atmosphere creates and sustains life. It's amazing and it's important to know how it works. I love teaching this course because it contains all the essential elements of the science behind the weather. I have been fascinated by the weather ever since I was a little kid, sitting on the curb in front of my house in Houston, Texas, watching the huge thunderstorms build and build and build until you knew the rain was coming soon and heavy. Usually I got inside before I got soaked, but not always! As a physics graduate student, I tried to focus on Astrophysics, but I knew I loved studying the atmosphere the most because it is so unpredictable and so relevant to our lives, so as soon as I could, I returned to studying and teaching about the atmosphere here at Penn State. I have taught Meteo 300 in residence four times, three in the past five years.

My research specialty is atmospheric chemistry, but to understand the chemistry, you need to understand the atmosphere and all of its physics. I've been at Penn State 27 years and have had a research group this whole time. It consists of graduate students, research associates who have Ph.D.s, engineers, and undergraduates - sometimes even sophomores. We have participated in more than 40 field studies of the atmosphere using both towers on the ground and airplanes. We have studied the atmosphere in places as far north as northern Sweden and as far south as New Zealand, and many places in between. On aircraft, we have flown all over the Pacific Ocean, North America, and the northern Atlantic Ocean. In 2012, we were part of the Deep Convective Clouds and Chemistry study and spent our time flying around thunderstorms in the central United States. That was fun! 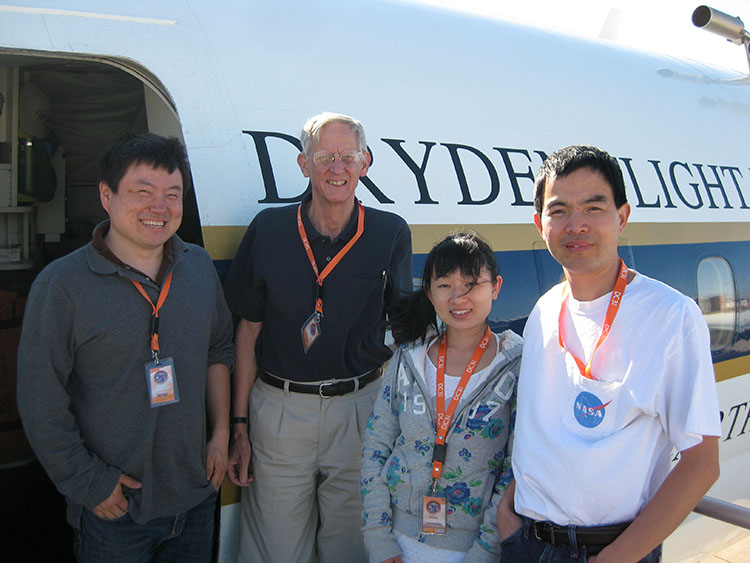 Penn State research at the entrance to the NASA DC-8 aircraft in Salina KS during the Deep Convective Clouds and Chemistry study in summer 2012.
Credit: W. Brune 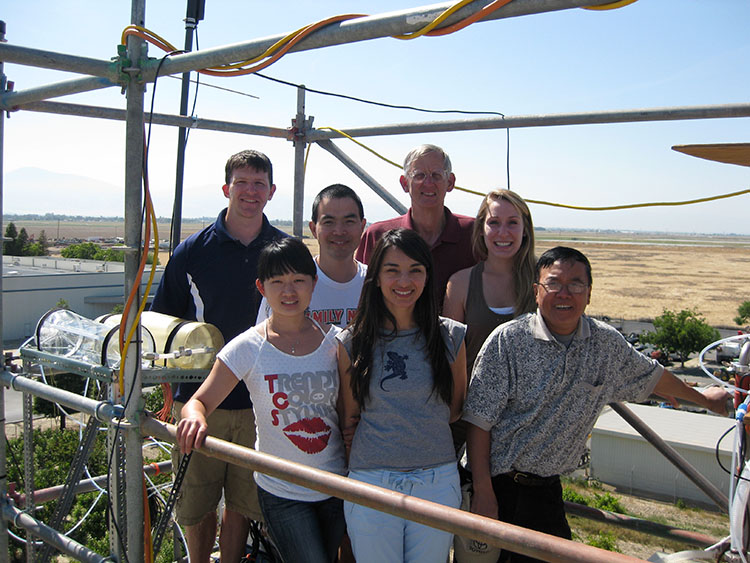 Penn State research team on a tower in Bakersfield CA during the CALNEX study in 2011. I am in the back.
Credit: W. Brune
METEO 300 Fundamentals of Atmospheric Science