Heuer makes three important points relative to intelligence in his work, the Psychology of Intelligence Analysis.

He provides the following series of images to illustrate how poorly we are cognitively equipped to accurate interpret the world.

Question #1: What did you see in the figure? The answer is at the bottom of this page.

Question #2: Look at the drawing of the man in the upper right. Are the drawings all of men? The answer is at the bottom of this page. 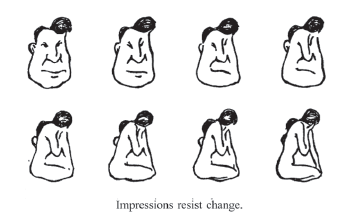 Question #3: What do you see—an old woman or a young woman? The answer is at the bottom of this page. 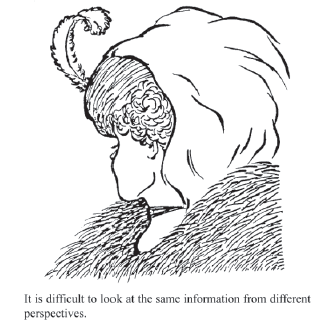 Now look to see if you can reorganize the drawing to form a different image of a young woman, if your original perception was of an old woman, or of the old woman if you first perceived the young one.

According to Heuer, and as the above figures illustrate, mental models, or mindsets, or cognitive patterns are essentially the analogous image by which people perceive information. Even though every analyst sees the same piece of information, it is interpreted differently due to a variety of factors. In essence, one's perceptions are morphed by a variety of factors that are completely out of the control of the analyst. Heuer sees these cognitive patterns ;as potentially good and bad for the analyst. On the positive side, they tend to simplify information for the sake of comprehension but they also bias interpretation. The key risks of mindsets are that:

What is required of analysts is a process for challenging, refining, and challenging their own working mental models. This is a key component of his Structured Analytic Techniques (SATs), which include Analysis of Competing Hypotheses.

These problems notwithstanding, cognitive patterns are critical to allowing individuals to process what otherwise would be an incomprehensible volume of information. Yet, they can cause analysts to overlook, reject, or forget important incoming or missing information that is not in accord with their assumptions and expectations. Seasoned analysts may be more susceptible to these mindset problems as a result of their expertise and past success in using time-tested mental models.

Answer #1: The article is written twice in each of the three phrases. This is commonly overlooked because perception is influenced by our expectations about how these familiar phrases are normally written.

Answer #2: The above figure illustrates that mind-sets tend to be quick to form but resistant to change by showing part of a longer series of progressively modified drawings that change almost imperceptibly from a man into a woman. The right-hand drawing in the top row, when viewed alone, has equal chances of being perceived as a man or a woman.