This chapter discusses the fourth step of the SGAM, highlighted below in gold, Evidence Development. 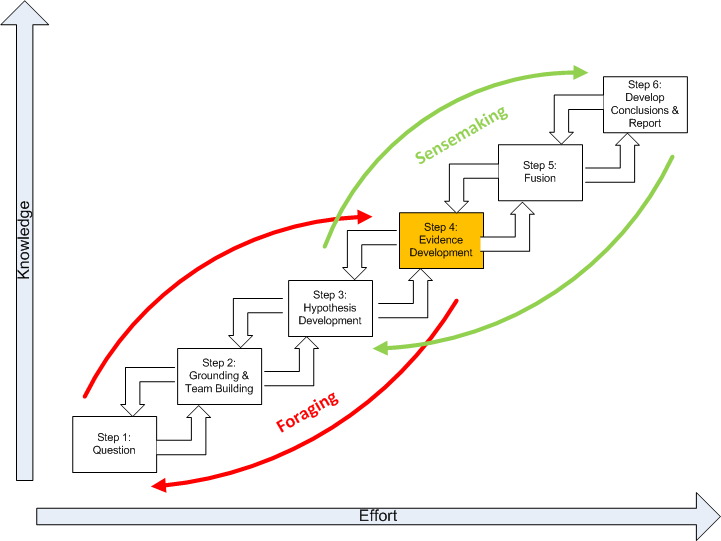 How do you choose your evidence? By basic definition, evidence is proof supporting a theory. The term evidence in geospatial intelligence includes the combination of aspatial evidence and spatial evidence to increase the estimate of the probability of the truthfulness of a hypothesis. It is important to note that evidence is dependent on the agent that estimates the probability. This is to say, a map, data, or textual information is regarded as evidence only when it is compatible with the hypothesis.

The goal is thinking with the evidence vs. thinking about the subject matter of the evidence. This is an important distinction and critical to the use of evidence to explain other evidence, solving problems, and formulating a perspective. Evidence includes assumptions and logical deductions as well as specific reported or researched items. Assumptions or logical deductions about how things normally work are often more important than hard evidence in determining analytical conclusions. Using geospatial tools, you can begin to further identify and characterize patterns. Here, developing evidence requires an understanding of the data, domain, and how to appropriately manipulate the data. These internal rule sets allow an analyst to evaluate evidence. The internal rule sets can be modified and enhanced as additional information is added and integrated into thinking. Sources of evidence may include:

The absence of evidence is also evidence and should be noted. Not all evidence needs to be included. Old evidence is likely to bias the analysis in favor of concluding that the status quo will continue. If there is going to be a significant change, that may well be apparent only from the recent evidence.