The most obvious change in the sky is that for about half of the day the sky is brightly lit and, for the other half, it is dark. If the sky is clear, we can tell that the Sun is “up” during the day and “down” at night. Even though this is obvious to most observers, there is one question about day and night that took many centuries to solve:

Is the Earth stationary and is the Sun orbiting it, or vice versa?

In the three movies above, we first see the motion of the Sun from East to West that we are familiar with seeing over the course of the daylight hours on one day. In the second movie, we see a stationary observer on a stationary Earth watching a moving Sun. This would reproduce what we see of the Sun appearing to move from east to west across our sky. The last movie shows another alternative; the Sun is at a stationary location from our perspective, and the Earth is rotating, causing the Sun to appear to move.

The Earth rotates around an imaginary line that goes through the North and South Poles, which is called the axis of rotation.

Rotation - Movement of an object in circular motion about an axis
Credit:Penn State Department of Astronomy & Astrophysics

This movie shows the rotation of the Earth along the axis that goes through the North and South poles.

One can make a representation of how the rotation of the Earth makes the Sun appear to move across the sky kinesthetically: If an object is at a fixed location on a wall (for example, a clock) and I am facing it, then I can see the clock. If I rotate so that I'm facing away from the clock, I can no longer see it. While I am rotating, the clock will, from my point of view, appear to be moving. You can try this out wherever you are right now!

If the Sun is in a "fixed" location on the sky and the Earth is facing this location, then we can see it (daytime!). When the Earth has rotated by 180 degrees, we are no longer facing the Sun, so we can't see the Sun (nighttime!). From our point of view fixed to a specific location on the Earth, as the Earth rotates it is the Sun that appears to move, just like the clock in my example above. This is our modern understanding of day and night.

This has consequences beyond day and night. The Earth's rotation causes every object in the sky to appear to trace out a path on the sky from East to West. So if you pick out a star in the sky, it will appear to make an arc across the sky. This is because, for our purposes, we can consider the star to be fixed in space, and the Earth is rotating underneath it. This happens slowly, so from minute to minute you don't notice the star's motion. However, over the course of a few hours you will be able to tell that the stars have moved a substantial distance on the sky. Since, like the Sun, the stars will (for the most part) appear to rise in the east and set in the west, so the apparent motion of a star will depend on which direction you face. An example follows in a 3 second movie. In the top left panel, you see stars appear to rotate counterclockwise around the North Celestial Pole, which is what we would see if facing north. In the top right panel, you see stars rising in the east, moving along circular, clockwise paths, and setting in the west, which is the behavior we would see if facing south. The lower panel shows the stars rising diagonally from the east on the first part of this circular path, which is what we would see if facing east.

Reproducing the above animation with real observations of the stars is a popular type of astrophotography. An example is an image following of the apparent motion of the stars across the sky as seen from Mt. Kilimanjaro. 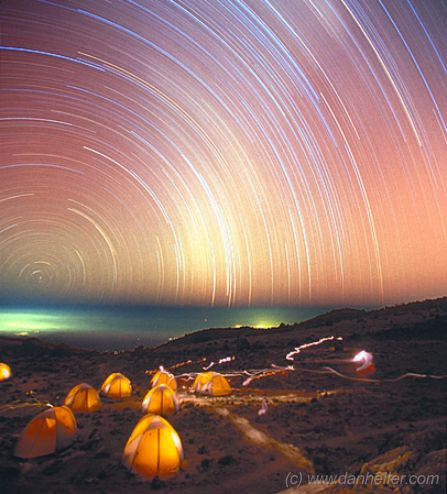 The Star Trails of Kilimanjaro
Credit: Astronomy Picture of the Day

The picture was created by leaving the camera shutter open for more than three hours (Note: can you tell how long the exposure was? How might you figure this out?), so it shows the path the stars in the sky follow over a small fraction of the night. This image also illustrates another important point—the Sun and the stars all appear to rotate around one point, which is the point directly above the North Pole of the Earth for observers in the northern hemisphere (called the North Celestial Pole or NCP), or the point directly above the South Pole of the Earth (the South Celestial Pole or SCP) for observers in the southern hemisphere. There is a star that is positioned very close to the NCP, which is called Polaris, the Pole Star. It is NOT the brightest star in the sky; it isn't even in the top 25. The importance of Polaris is that it roughly marks the location of the NCP, so all stars visible to observers in the northern hemisphere appear to rotate around Polaris.

We can prove to ourselves that the apparent motion of objects in the sky depends on your location on the Earth! For example, consider the following cases:

‹ Definitions up The Path of the Sun ›
ASTRO 801: Planets, Stars, Galaxies, and the Universe