The Path of the Sun

During the day, we can see the Sun, but the bright daylight sky prevents us from seeing most other objects in the sky (on some days you can see the Moon during the day, and if you know where to look you can also sometimes see Venus).

As a thought experiment, think about what you might see if you were able to see the Sun and the stars in the sky during the daytime simultaneously.

Let's look at two movies made with Starry Night. The first illustrates the path of the Sun during one day (Sunrise to Sunset), following the instructions listed prior.

In this first animation, we see the Sun low on the eastern horizon at sunrise, around 7am, and it is in Virgo. When the animation advances, both the Sun and Virgo move from their position low on the eastern horizon to a higher point due south at noon (note that the animation is a bit deceiving, the stars and the Sun should appear to move at the same rate). Lastly, in the final frame, both the Sun and Virgo have set on the western horizon at 6pm.
Credit: Chris Palma

The second illustrates the position of the Sun at noon eastern on June 21, September 21, December 21, and March 21.

In the first of the two movies, notice the Sun's position relative to the constellation Virgo at 7:00 AM, noon and 6:00 PM. As we discussed at the beginning of the lesson, it is the rotation of the Earth that causes the Sun and the stars to move across the sky, so we should expect that the Sun and the stars should both appear to move at the same rate. Thus, the Sun will be seen inside of the same constellation during the entire day. That is, if the Sun appears to be in the constellation of Gemini at dawn, then it will still be in Gemini at noon and at Sunset.

This is mostly correct, however, there is one effect that we are neglecting to take into consideration. The Earth isn’t just rotating in a fixed spot in space. The Earth is also orbiting around the Sun. In one year, the Earth will make a complete trip around the Sun. So, in December, the Earth will be on one side of the Sun, and six months later, in June, it will be on the opposite side of the Sun.

The animation above shows a stationary Sun with a planet revolving (or orbiting) around the Sun.
Credit: Chris Palma

This is reasonably easy to visualize when you think of the extreme case of the differences in the position of the Earth six months apart, but what happens on a day to day basis? The way to visualize it is as follows. The stars are so far away from the Earth that, again, for our purposes, we can consider them to be fixed. We know that the rotation of the Earth causes stars to appear to make circles or arcs on the sky that start in the east and move westward. A natural question to ask is, “How long does it take for star A to appear in the same spot in the sky one day later?” That is, let’s say that star A is “transiting your meridian” (this means that if you draw the imaginary line on the sky that connects due North to due South, the star is passing this line at this particular instant in time), how long will it be until star A transits your meridian the next time? You may be tempted to say 24 hours, but the correct answer is 23 hours and 56 minutes! If you do the same exercise for the Sun—that is, if you calculate the time between successive transits of the Sun—it is 24 hours (although it does vary over the course of the year, and some days are slightly longer and others are slightly shorter than 24 hours).

The length of time between transits for a star (any star) is called a Sidereal Day, and the length of time between transits for the Sun is called a Solar Day. The difference is caused by the slow drift of the Earth around the Sun. Because the Earth has moved 1/365th of the way around the Sun in a day, it has to rotate more than 360 degrees in order for the Sun to appear in the same part of the sky (e.g., transiting the meridian) as it did yesterday. However, since the stars are so far away, the Earth’s orbit around the Sun doesn’t affect their apparent position in the sky, so the Earth only needs to rotate 360 degrees in order for them to appear in the same part of the sky. Because of this effect, the Sun appears to slowly drift eastward compared to the background stars, and the cumulative effect of this drift is that the Sun will appear to be in Gemini in June and Sagittarius in December. 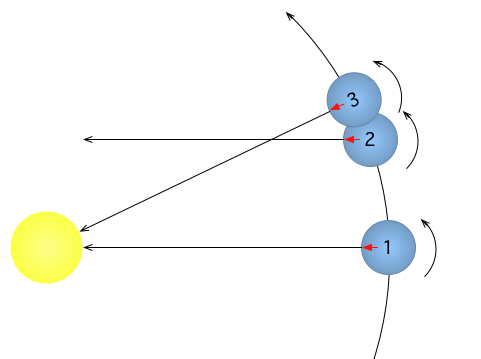 Rotating Earth's view of the Sun changes as the Earth orbits the Sun
Credit: Wikimedia Commons

‹ Day and Night up The Height of the Sun ›
ASTRO 801: Planets, Stars, Galaxies, and the Universe