Now, if the water vapor pressure is greater than the equilibrium value (numerator is greater), there is a net condensation (and a cloud could form, say). And that is not because the air cannot hold the water, but merely because there is a greater flow into the condensed phase than out of it.

Relative humidity describes the amount of water vapor actually in the air  (numerator), relative to the maximum amount of water the air can possibly hold for a given temperature (denominator). It is expressed as a percentage: 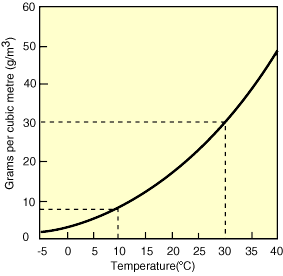 Figure 10. When an air mass contains the maximum amount of water it can hold, it is saturated with water vapor. This is shown graphically in the plot above as the black solid curved line in Figure 10. With increasing temperature (x-axis), the air can hold more water vapor (y-axis), as indicated by higher saturation values (solid black curved line). In general, it is not possible to have water contents that exceed saturation (i.e. relative humidity is 100%). In other words, the maximum relative humidity is generally not greater than 100%  (i.e. not above the solid black curved line). Another way to think about relative humidity is that it describes how close the air is to saturation. In the example shown, the actual water vapor content is about 40% of that at saturation (i.e. the blue point is about 40% of the way to saturation) – meaning the RH = 40%.
Source: Michael Arthur and Demian Saffer

One important consequence is that when air masses change in temperature, the relative humidity can change, even if the actual amount of water vapor in the air does not (the numerator in our equation, which is defined by the saturation curve, stays the same, but the denominator changes with temperature). Figures 11-13 below show an example of this process. As the air cools, the relative humidity increases. If the air mass were cooled enough to become saturated (hit the solid black curved line), condensation would occur. This temperature is called the dew point. 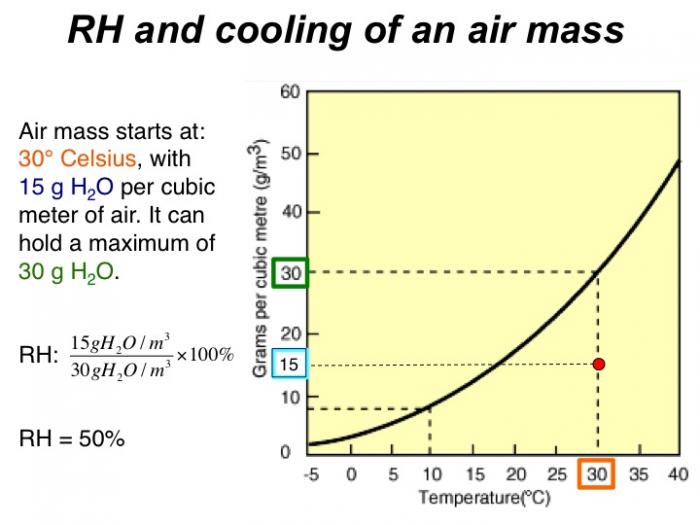 Figure 11. RH and cooling of an air mass
Click Here for text alternative of Figure 11 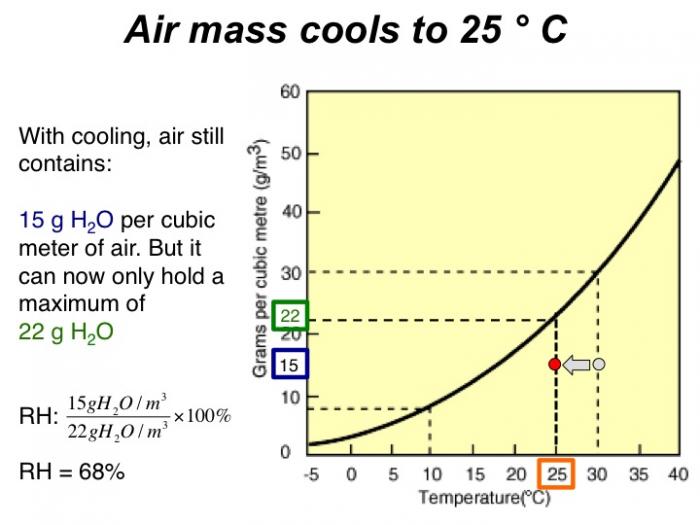 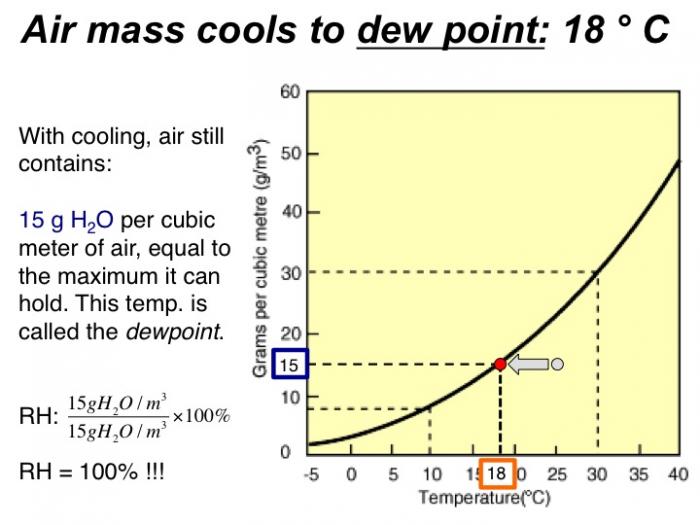 With cooling, air still contains 15 grams H2O per cubic meter of air, equal to the maximum it can hold. This temp. is called the dewpoint. RH = 100%!

In the same way, changes in relative humidity occur when warm moist air is forced to rise or, conversely, when cool dry air descends. For example, when an air mass moves over mountains, it cools as it rises, and when it reaches the dewpoint, water will condense. This forms clouds, and if the air mass cools enough, the condensation becomes rapid enough to form precipitation.