To take the concept of relative humidity outdoors, let's consider why it rains in some areas and we have deserts in others. There are two primary reasons for this. Both are related to the transport, rise, and fall of air masses that lead to temperature changes, and ultimately in the amount of water vapor that the air can hold. These are the orographic effect, and atmospheric convection.

In both cases, cooling and warming of air masses occurs because they are forced upward or downward in the atmosphere. The decrease in air temperature with elevation is known as the atmospheric (or adiabatic) lapse rate, as shown below, and is related to decreasing air density and pressure with increasing altitude (as air rises, it expands due to decreased pressure, leading to lower temperature). A typical average lapse rate is around 7° C per km of altitude change. If an air mass begins rising and has not reached the dewpoint temperature, it follows a dry adiabatic lapse rate, with the rate of cooling due nearly entirely to decreasing pressure, as shown in Figure 14. Once the airmass temperature reaches the dewpoint during continued rise, water droplets begin to condense (forming clouds) and the airmass follows a moist adiabatic lapse rate (Figure 14), for which the rate of cooling with elevation decreases because of the addition of some offsetting heat to the airmass from the process of condensation (termed latent heat). 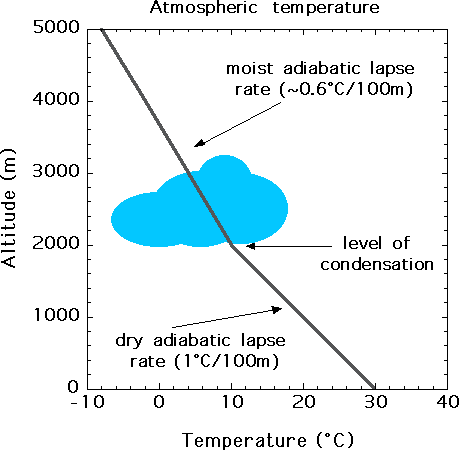 Figure 14. An example of the rate of cooling of an airmass rising from ground level to higher altitudes, and the effect on rate of cooling when reaching the point of saturation with respect to water vapor (level of condensation).
Click to expand for a long description
A graph of atmospheric temperature with altitude in meters on the y-axis and temperature in degrees Celsius on the x-axis. One line with two different decreasing slopes separated at 2000m. The moist adiabatic lapse rate (~0.6C/100m) occurs above 2000m. The dry adiabatic lapse rate (1C/100m) occurs below 2000m.
Source: Mike Arthur and Demian Saffer

The orographic effect occurs when air masses are forced to flow over high topography. As air rises over mountains, it cools and water vapor condenses. As a result, it is common for rain to be concentrated on the windward side of mountains, and for rainfall to increase with elevation in the direction of storm tracks. With continued cooling past the dewpoint, the amount of water vapor in the air cannot exceed saturation, so water is lost from the air via condensation and precipitation.

On the leeward side of mountain ranges, the opposite occurs: the air descends and warms. As it does so, it is capable of holding more water vapor (recall the saturation line in the relative humidity plot above). However, there is no source of additional water, so the descending air mass increases in temperature but the amount of water vapor remains constant. Because the air has lost much of its original water content, as it descends and warms its relative humidity decreases. These areas are called rain shadows and are commonly deserts. You’ve probably noticed this same process in action when you heat your house or apartment in the winter – warming the cold air leads to dry conditions – one of the reasons people often put water pots or kettles on their wood stoves.

The animation below shows an airmass trajectory superimposed on a Google Earth image of western North America. The point of this animation is to provide an explanation of the orographic effect and the changes in temperature and water content of an airmass passing over several mountain ranges. The animation shows the "rain shadow" effect that results in desert regions behind large mountain ranges. An inset graph at bottom right illustrates combinations of temperature (x-axis) and moisture content (y-axis) in grams per cubic meter of the air mass as it passes over various topographic features on the land surface.

Orographic Effect Animation. The sequence of frames portrays a westerly wind, blowing onshore from the Pacific Ocean, driven by a large low-pressure system over the northwestern US. At point 1, the airmass is relatively warm (about 23 degrees C) and moisture-laden (relative humidity about 80%) blowing over the ocean surface. At point 2 the airmass rises over the California Coast Range, cools to about 17 degrees C, and its relative humidity reaches 100% so that clouds form and it rains, losing some of the moisture it is carrying. At point 3, the air has sunk into the Central Valley, warming nearly to its original temperature. However, because the airmass lost moisture over the Coast Range, it now has a lower relative humidity. At point 4, the airmass is forced to rise over the higher Sierra Nevada range, cooling progressively as it rises in elevation from 3000 feet (12 degrees C) to over 14000 feet (freezing point). Initially, moisture is lost as rain at lower elevations and then snow at the high elevations. Much of the moisture is wrung out over the Sierra Nevada such that when the air sinks into the low-lying (near sea level) Owens Valley to the east, it warms (to about 16 degrees C) and consequently has a very low moisture content and relative humidity. Position 6 illustrates rising air over the White Mountains, about 10,000 feet high, over which the air again cools and loses what little moisture it has as snow. As the air descends into the desert region of Nevada, it warms again with a very low moisture content and relative humidity. To watch the animation again from the beginning, just refresh your browser.
Source: Mike Arthur and Demian Saffer
‹ Relative Humidity up Atmospheric Convection: Hadley Cells ›
Earth 111: Water: Science and Society