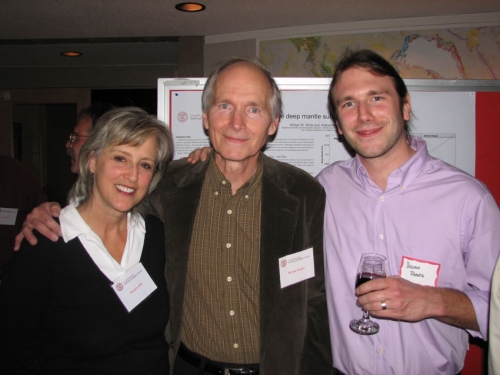 Dr. Bryan Isacks earned his Ph.D. in 1965 under the guidance of Dr. Jack Oliver at Columbia University.3&5  Together, these two colleagues firmly believed that "if you really want[ed] to understand a natural phenomenon, figure out where in the world that natural phenomenon [was] most clearly and most vigorously manifested, and go there to study it!"1  Fortunately for Isacks, this philosophy led straight to Fiji where he began his career researching deep earthquakes in the South Pacific.  The seismic data he collected during his 15-month stay in the Fiji-Tonga region contributed significantly to our knowledge of the subduction process.3  Along with fellow Lamont-Doherty Earth Observatory colleagues, Dr. Oliver and Dr. Lynn Sykes, Dr. Isacks contributed his research and knowledge to a comprehensive paper that revealed the “near-perfect fit” between earthquake properties and the growing theory of plate tectonics.4 According to the associate director of the Lamont seismology division, Arthur Lerner-Lam, “their work was key in convincing scientists of the explanatory power of the ‘new global tectonics,’ and opened up new areas of research that even today remain fundamental.”4

Dr. Isacks continued to work in Fiji, Tonga, and New Hebrides after joining the faculty of Cornell University in 1971.5  In the 1980’s, he switched his research focus to remote sensing and tectonic geomorphology.5  His more recent research interests have included tectonic topography and seismicity in the central Andes region and glacial geomorphology in southeastern Alaska.5  During his tenure at Cornell, Dr. Isacks also worked with colleagues across multiple disciplines to develop the Science of Earth Systems major and Cornell’s Department of Earth and Atmospheric Sciences.5  Recently retired from active faculty, Dr. Isacks has remained connected to Cornell University as an Emeritus Professor still involved in the development of graduate students.2

Specific contributions to the theory of plate tectonics

In the 1960s, Bryan Isacks worked alongside Jack Oliver and Lynn Sykes to “[relate] observations from the field of seismology” to the new theory of plate tectonics.6  Their seismological data lent “remarkable support” to the burgeoning plate tectonics revolution.6  The culmination of their efforts appeared in a seminal article in the Journal of Geophysical Research titled Seismology and the New Global Tectonics.

You can access this article using the following link: Isacks1968

Part of the groundwork for this significant article came from earlier research published by Oliver and Isacks in 1967.  During their study, Isacks and Oliver detected an anomalous zone approximately 100 km thick descending below the Tonga island arc with a highly seismic upper surface.7  They determined that seismic body waves in this anomalous zone experienced less attenuation than waves traveling at equal mantle depths elsewhere.7  From these results, Oliver and Isacks concluded that a strong zone of uppermost mantle east of Tonga continued westward beneath the island chains to a depth of around 700 km.7  The downward sloping structure they uncovered, as well as other seismic data, supported the idea of a mobile lithosphere.  The strong slab of lithosphere dropping beneath the Tonga arc lent credibility to the emerging plate tectonics theory.

In 1969, Dr. Isacks continued his research of seismicity around plate convergence zones with Peter Molnar.  Using a worldwide comprehensive survey of earthquake focal mechanisms, Isacks and Molnar uncovered regions of extensional and compressional stress in down-dipping slabs of lithosphere around the world.8  The model they constructed suggested that gravitational forces on the sinking slabs of lithosphere produced stresses on the portions of the plates still at the surface.8  In these conditions, the pull on the surface portions supported the slabs’ loads until their masses bottomed out in the asthenosphere.8  Basically, the plates of lithosphere sank into the asthenosphere under their own weight until they reached resistance to their downward movement below approximately 300 km.8 Once the sinking slabs hit this barrier, the support for their masses transferred from above to beneath their loads.8  This simplified model suggested that gravitational forces on the sinking slabs significantly influenced stresses within the lithosphere, while also playing a significant role in global plate movements.8  Figure 1 below shows this concept developed by Isacks and Molnar.

Figure 1. Isacks and Molnar (1969, p. 1123) illustrate the possible distribution of stresses when a slab of lithosphere sinks into the asthenosphere.8  Black circles show extensional stresses, while unfilled circles show compressional stresses.  Diagram “a” shows the slab sinking at the subduction zone.  Diagrams “b” and “c” show the slab facing resistance at the bottom.  Diagram “d” shows a piece of lithosphere broken off from the slab. Both “b” and “d” would show gaps in seismic activity.8  All four diagrams show a black circle (i.e. underthrusting and extensional stress) near the surface resulting from the slab bending beneath the trench.8

Additional shallow and deep earthquake data collected by Isacks, Sykes, and Oliver from the Tonga-Kermadec island arc, along with other locations, supported the tectonic model well.  From their data, they concluded that shallow earthquakes originated between the segments of lithosphere at the surface and the segments of lithosphere sinking into the asthenosphere.9  In contrast, deeper earthquakes occurred as a result of compressional forces within the descending slabs parallel to the “presumed downward motion” of the plates.10  Earthquake focal mechanisms and the belt-like distribution of seismic activity around the globe also correlated well with the idea of large global plates interacting at their boundaries.11 Dr. Isacks and his colleagues had identified strong forces driving tectonic plate motions and seismic activity.  Some of the conclusions they made reappear below in the USGS Earthquake Summary Map created in 2007 for an earthquake in the Tonga-Kermadec subduction zone. 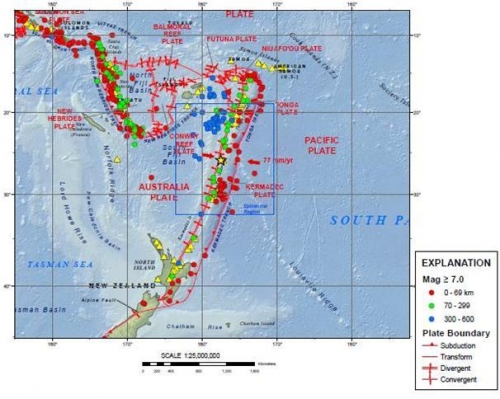 Image 1.12  This USGS (2007) Earthquake Summary Map shows the tectonic settings surrounding a M7.8 earthquake on December 9, 2007 along the Tonga-Kermadec subduction zone studied by Isacks and Oliver. 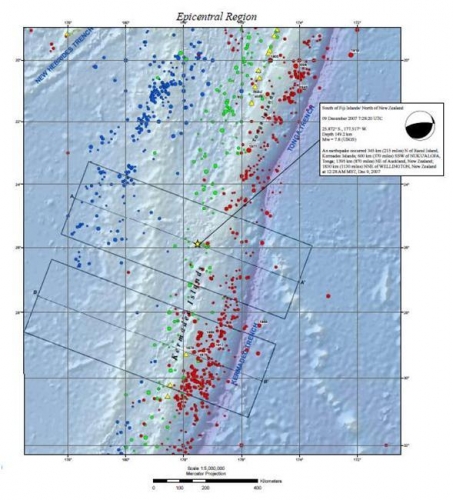 Image 2.12 In this image we can see earthquake epicenters identified along the Kermadec and Tonga trenches where the westward-moving Pacific plate subducts beneath the Australian plate and dips towards the west (USGS, 2007).

Image 3.12  (USGS, 2007) These cross sections of epicenters from image 2 above reveal the increasing depths of earthquakes as they follow the subducting lithosphere beneath the Tonga-Kermadec arc.  This seismic data follows the connections Isacks, Oliver, and Sykes made between seismic activity and the explanatory power of the new global tectonics theory. The earthquakes trace the downward sloping lithosphere.

Dr. Isacks’ focus on geomorphology in the central Andes region eventually led to the development of the largest working academic group in South America.15  The Cornell Andes Projecthe helped initiate has researched subduction, seismicity, and orogenesis in the large-scale laboratory of the Andes region for over 30 years.16

The maps above show some of the research locations used in the Cornell Andes Project.16(Cornell University, n.d.) ©2011 Cornell University. All rights reserved.  Reproduced here for educational purposes only. 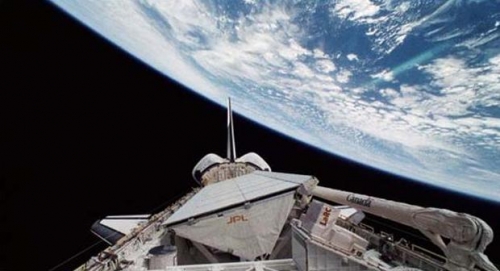 Sykes, Isacks, and Oliver all agreed to determine the order of authorship for Seismology and the New Global Tectonics by lot after realizing it would take the hard work of all of them to stay on the leading-edge of seismological research involving plate tectonics.19  Basically, a race to publish led to a cooperative agreement.  A footnote at the bottom of the article’s title page reveals their authorship arrangement.

Dr. Isacks served as the Principle Investigator for Cornell’s Earth Observing System(EOS) investigation of climate in high mountain systems.20  Along with Chris Duncan, Isacks hoped to generate snow lines to serve as climate indicators.20 Isacks is considered one of the original leaders in understanding the interactions between mountain building and climate.21

Dr. Isacks was one of the original pioneers in the use of space imaging technology.  The radar surveys taken from the Space Shuttle Endeavor uncovered remote parts of the Andes never surveyed or mapped before.22  Not even satellite imagery existed for some of the locations surveyed in the cloud-covered eastern portions.22

structures in the upper mantle, and the lithosphere.  Retrieved January 26, 2011,

upper mantle, and the lithosphere.  Journal of Geophysical Research, 72(16), pp.

earthquakes in the Tonga-Kermadec region and the tectonics of island arcs.

earthquakes in the Tonga-Kermadec region and the tectonics of island arcs.

story of earthquakes and the great Earth science revolution of the 1960s.  Retrieved January 29, 2011