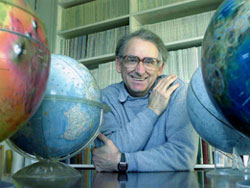 Dan McKenzie published his first article on plate tectonics, providing a mathematical model for convection in the mantle explaining the movement of the earth's crust, “The viscosity of the lower mantle” (McKenzie, 1966). He and colleague, Bob Parker, went on to publish another article which described the principles of plate tectonics, “The north pacific: An example of tectonics on a sphere” (McKenzie and Parker, 1967), although there was a bit of controversy over it. McKenzie is currently Royal Society Professor of Earth Sciences at Cambridge University in England.

McKenzie was born in Cheltenham, UK, in 1942 to brilliant parents. Cheltenham is in western England, closer to Cardiff, Wales, than London. His father was an ear, nose and throat physician, as was his paternal grandfather. His mother won a national scholarship for college. She became interested in landscaping and geology, which influenced McKenzie.

McKenzie’s undergraduate work was in math and physics. His graduate work was in physics, and graduated with 2:1 honors, which he attributed to losing interest in physics toward the end of college. McKenzie earned a research fellowship at Cambridge under Edward “Teddy” Bullard, who suggested that McKenzie pursue thermodynamic variables. This led to McKenzie’s interest in convection in the earth’s interior. He taught himself fluid mechanics, and joined the Scripps Institution at the invitation of Freeman Gilbert and Walter Munk.

After several months, he returned to Cambridge and submitted his PhD in 1966. Shortly after this, Bullard brought McKenzie to a conference in New York entitled, “The History of the Earth’s Crust.” McKenzie heard Fred Vine and Lynn Sykes speak about sea floor spreading, magnetic anomalies, and earthquakes. He heard his calling in life.


Specific contributions to the theory of plate tectonics

Following his attendance at the conference on the Earth’s Crust, McKenzie applied his knowledge of math, physics, and thermodynamics to the problem of the mechanism for the earth’s crust moving. The result was his first paper on plate tectonics – “The viscosity of the lower mantle” (McKenzie, 1966). Using more math than I can comprehend, he concluded that the there are two layers in the mantle, each of them in motion, which contribute to continental drift. He refuted two other models of the earth that were apparently prevalent at the time; one posited that the earth was homgeneous sphere, and the other that the core is inviscid and that the mantle is homogeneous. McKenzie's work showed that the earth is far more dynamic than previously thought and added to the growing awareness that convection in the mantle was driving continental drift. Wegener's idea was rejected in part because he could not provide a mechanism for continent's moving. McKenzie provided that mechanism.

One year later, McKenzie and Bob Parker published “The north pacific: An example of tectonics on a sphere” (McKenzie & Parker, 1967). McKenzie had read a paper by Bullard on using a theorem by Euler. He and Parker combined that math with the magnetic anomalies and earthquake data he had picked up from Vine and Sykes to produce their paper. McKenzie and Parker postulated that rotational vectors, as described by Euler’s theorem, explain the behavior of plates and explains the formation of ridges, trenches and transform faults. Interestingly, they refer to their idea as “the paving stone theory of world tectonics” (McKenze & Parker, 1967, page 1276).

This paper was received with some controversy. Jason Morgan published a paper using the same math principles in 1968. However, Morgan had presented his ideas a year earlier at a conference which McKenzie had attended. However, McKenzie stated that he had not attended Morgan’s lecture, and that Morgan’s actual lecture at the conference was not the one indicated in the abstract (MacFarlane, 2007).

After this, McKenzie turned his attention to convection currents in the mantle. He and others determined that convection is the dynamo that leads to the movement of the plates.

McKenzie investigated the phenomenon of earthquakes in Iran.

McKenzie became interested in the formation of sedimentary basins caused by stretching of the crust. Many of these basins filled in with organic material, which over time became fossil fuels. Oil companies refer to this process as the McKenzie Model of Sedimentary Basins.

McKenzie has recently conducted research in Iceland to delve into the issue of how magma flows and comes to the surface.

Finally, McKenzie is analyzing data from the magnetometers on board the Mars Global Surveyor spacecraft and other satellite data to explore whether there is plate tectonics on Mars or Venus.


Other cool stuff you should know

McKenzie’s mother initially applied to Cambridge, but was rejected due to her Yorkshire accent. She enrolled at Royal Holloway of the University of London instead. She was a little disappointed that in later years her son would attend and become a professor at Cambridge.

McKenzie’s mother enrolled in a degree program in landscaping. After 1 year, she became dissatisfied with the curriculum, dropped out, did her own research, and published “New Lives, New Landscapes,” which became a standard textbook at the very program from which she dropped out. That school gave her an honorary degree.

When McKenzie came to the Scripps Institution, he came on an immigration visa. He didn’t realize it, but that made him liable for the draft. When he was mailed draft registration papers six months later to complete, he hopped on a plane and returned to Cambridge.

University of Cambridge Newsletter. (2002). Photo retrieved on February 1, 2011, from http://www.admin.cam.ac.uk/univ/newsletter/2002/june-july/newsinbrief.html