The study of the Earth's magnetic field as recorded in the rock record was an important key in reconstructing the history of plate motions. We have already seen how the recording of magnetic reversals led to the confirmation of the seafloor spreading hypothesis. The concept of apparent polar wander paths was helpful in determining the speed, direction, and rotation of continents.

To illustrate the idea of polar wander, imagine you have a composite volcano on a continent like the one in the sketch below. I assure you that the sketch will be better understood if you also watch the screencast in which I talk while I draw it. 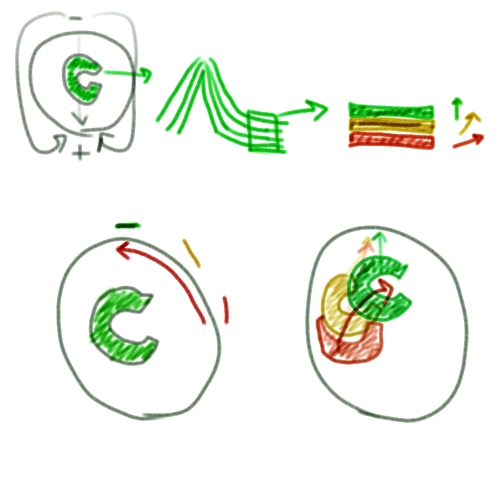 Sketch showing two possibilities for apparent polar wander paths. In the upper series of sketches there is a landmass on a planet with a dipole field. A volcano on that land mass erupts at various intervals, creating layers of igneous rock which are permanently magnetized with different orientations. The bottom two sketches show two ways to achieve this state. Either the pole moved (bottom left), or the land mass moved (bottom right).
Source: Drawing by E. Richardson

In order to illustrate an apparent polar wander path, let’s say we’ve got the Earth here, and it’s got its poles like so, just the way they are today. The magnetic field lines are going like that. And let’s say we’ve got a continent sitting here. It looks like this. There’s a volcano on this continent and it’s a composite volcano. A composite volcano spews out lava and it gradually builds up the mountainside with its lava flows like this. Here’s the lava coming down this side. Let’s pretend we are a geologist and we’re going to go to this volcano and we’re going to take some samples of these lava flows. We’ll zoom in on these lava flows here. The uppermost sample of the lava flow, we’ll call that this green one here. Underneath that green one there’s a more orange-yellow lava flow and then under that there’s this oldest one here. We have a magnetometer and so we can try to figure out which way all these lava flows thought north was when they formed and cooled. Let’s say that the red one points sort of in this direction and the yellowish one looks like this. The green one was formed during the field like it is today so its north is like that. There are two possible explanations for how this could have occurred. We’ll draw those right here. Explanation 1 is that the poles moved around and the continent stayed in the same place. In that case, we’ve got a continent sitting here. When the most recent lava formed, this green stuff, the pole was right up here, where it is today. But back when this volcano was making the yellow lava, the pole was in a slightly different place. It was more like over here. The oldest lava flow is recording a pole that was more like in that direction. In this case we end up with what we call an apparent polar wander path. Over time from back when to the present time the pole moved in that direction. The other possibility is that the continent moved and the pole stayed in the same place. In that case, the green continent of today would be here. When this lava froze, it was pointing north toward the north pole. Back when this yellow lava formed, if the pole was in the same place then the continent would have to have been over here somewhere like this because its lava froze pointing north, but then over time when this continent moved to its present position with the lava still frozen in place it is now pointing in a different direction that isn’t where north is anymore. If we go back even farther in time toward the red lava, then the continent must have been sitting in a position sort of like this. When its lava formed, it was pointing north, then when this continent went through this rotation, this lava was already frozen in place, so the direction it’s pointing isn’t in the same place that north is now. We can construct a path — an apparent wander path if you will — of the continent. We can see that the continent must have gone sort of like this. This is in the opposite direction of the one we constructed before.

This volcano erupts from time to time, and when its lava solidifies and cools, it records the direction of the Earth's magnetic field. A geologist armed with a magnetometer could sample down through the layers of solidified lava and thus track the direction and intensity of the field over the span of geologic time recorded by that volcano. In fact, geologists did do this, and they discovered that the direction of the north pole was not stationary over time, but instead had apparently moved around quite a bit. There were two possible explanations for this:

Before plate tectonics was accepted, most geologists thought that the pole must have moved. However, once more and more measurements were made on different continents, it turned out that all the different polar wander paths could not be reconciled. The pole could not be in two places at once, and furthermore, the ocean floors all recorded either north or south, but not directions in between. So how could lavas of the same age on different land masses show historic directions of the north pole differently from each other? Once seafloor spreading was recognized as a viable mechanism for moving the lithosphere, geologists realized that these "apparent polar wander paths" could be used to reconstruct the past motions of the continents, using the assumption that the pole was always in about the same place (except during reversals).

The example in my fabulous drawing gives a rather vague description of the idea behind using paleomagnetic data to reconstruct the former positions of the continents, but how is it actually done? We use magnetometers. 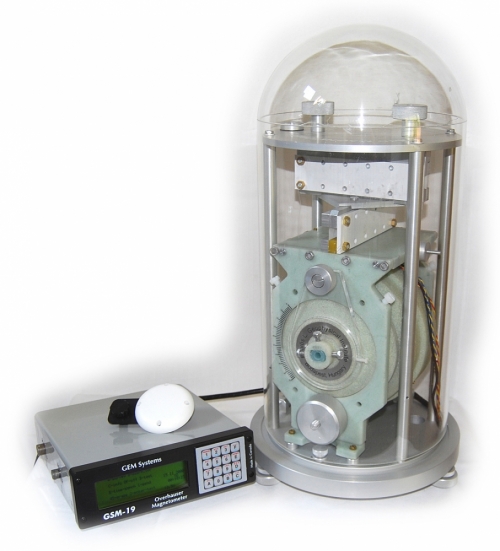 A magnetometer can measure the angle between the direction of the Earth's magnetic field and horizontal.
Source: GEM systems