When an earthquake happens, the main quantity of interest is its magnitude. How big was the earthquake? Over the years, scientists have developed various ways to measure earthquake size and strength. Here's an overview of the most common magnitude measurements.

This scale is a qualitative measure of the amount of felt shaking caused by an earthquake. This scale goes from I (not much of anything) to XII (total destruction). The amount of felt shaking is generally measured by interviewing witnesses to find out how much shaking they felt. Sometimes the interviews can be supplemented by observing any earthquake damage to buildings. For earthquakes in the historic record that happened before the advent of seismometers, Mercalli intensities are often assigned by checking out old newspaper reports and examining the foundations of old buildings. Mercalli intensities are generally depicted on maps by several concentric rings around the epicenter of the earthquake that give some idea of the severity of the felt shaking at various distances away from the earthquake. The Mercalli is not a very useful scale for science because it can't tell us much about big earthquakes that are not felt by people--earthquakes that occur at a great depth, or in the ocean, for example. 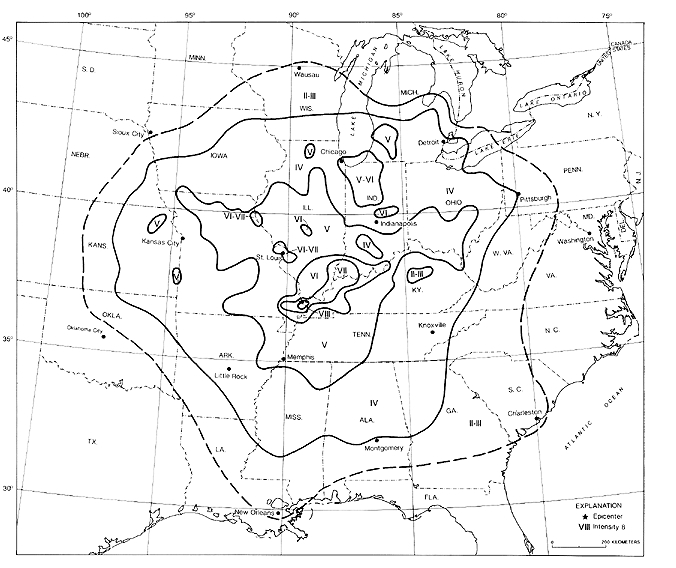 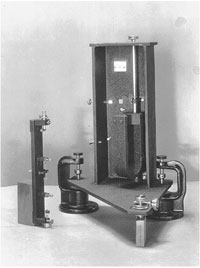 A Wood-Anderson torsion short-period seismometer. This is the type of seismometer used by Richter to measure earthquake amplitude and develop his magnitude scale.
Source: USGS

Charles Richter developed a magnitude scale in the 1930s because he wanted to be able to characterize the seismicity he had been measuring in California with some kind of numbering system that would encompass all the earthquakes, from ones that had hardly been felt at all, up to really big ones. The way he did this was to pick a reference earthquake and measure its maximum ground motion. Then all the other earthquakes he had recorded could be compared to the reference, after correcting for distance. Each integer increase represented a factor of 10 increase in ground motion amplitude. This scale worked because he always used the same type of seismometer and all his earthquakes were in southern California, so there didn't have to be any extra corrections for different depth or rock type. Today, scientists don't use the Richter scale the way he did because not all earthquakes of interest happen in California, and also because the type of seismometer he used is out of date now. For all measurements recorded on a different type of instrument or that measured amplitudes of different wavetypes, you'd have to make a conversion to get your number to be in line with Richter's scale. The handy thing about the Richter scale is that for most earthquakes of interest, the magnitudes end up being numbers that range from about 3 - 9 and these are numbers easily understood by people. (In fact the scale itself does not set an upper or lower limit; limits of earthquake size are set by the Earth).

Today scientists calculate the seismic moment of an earthquake when they want to talk about how big it was. Seismic moment (M0) is simply the product of the average amount of slip that happened, the area of the fault that slipped, and the rigidity of the rock. The equation is :

The rigidity of rock is a constant number based on the rock type. It has units of pressure. Typical assumptions are on the order of 3 x 1010 N/m2. Slip is a length and it is on the order of centimeters (meters for a great earthquake). Area is in units of length2 and is often on the order of km2. The units for seismic moment are then Nm (newton meters). As an example, the 2004 26 December Sumatra-Andaman earthquake had the following dimensions as reported by Lay et al. (2005): Its slip averaged about 5 m, its rupture length was about 1300 km and the fault width was between 160 - 240 km. Assuming a rigidity of 3 x 1010 N/m2 gives us a seismic moment of 3.9 x 1022Nm. See a pencast calculation of this earthquakes's seismic moment.

Now, the problem with seismic moment is that regular people who watch the news or read the papers don't really know what to make of a number like 4.4 x 1022Nm, and even scientists are smart enough to realize this, so we convert seismic moment to a magnitude scale called "moment magnitude," usually symbolized Mw or sometimes just M. This scale is designed purposely to be about equal to Richter's scale so that people will have a feel for what it means. Hiroo Kanamori at Caltech derived the formula for the conversion of seismic moment to moment magnitude as follows:

Using Kanamori's formula to convert seismic moment to moment magnitude, what was the magnitude of the 2004 Dec 26 Sumatra-Andaman earthquake? Try it yourself and then check your work by clicking below:

Click here for my answer for the magnitude of the Sumatra-Andaman earthquake.

Another way to think about earthquake size is in terms of the energy released by an earthquake. It is actually not terribly easy to measure all the energy released by an earthquake because you have to integrate over time and space and include the broadest possible spectrum of frequencies to make sure you are recording all the energy. Therefore, direct measurements usually underestimate the energy. If they aren't trying to measure it instrumentally, most seismologists just use the following empirical formula, developed by Båth (1966) to relate magnitude to energy (in units of joules):

This relationship was only meant to work for fairly big (M > 5) earthquakes. Plug magnitude values of 5.0, 6.0, and 7.0 into the equation above. The energy released by an M5 earthquake is about 2.8 x 1012 joules. An M6 earthquake releases 7.8 x 1013 joules, and an M7 radiates 2.1 x 1015 joules. If you don't have a sense for what these numbers mean, the bomb dropped on Hiroshima released about 7.4 x 1012 joules. Even though all of these are large numbers, what I want you to see here is that the difference between these values is huge. A magnitude 7 releases almost 30 times as much energy as a magnitude 6. 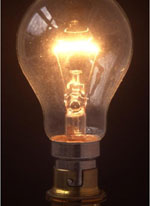 Time for the big picture!

Using the formula to relate magnitude to energy, how much energy was radiated by the Sumatra-Andaman earthquake? Try it yourself and then check your work by clicking below:

Click here for my answer to how much energy was radiated by the Sumatra-Andaman earthquake.

The magnitude is 9.05. We already knew that.

A 60-watt incandescent light bulb uses 60 joules of energy per second. The rupture of the Sumatra-Andaman earthquake lasted about 500 seconds. So,this earthquake released enough energy during its rupture to light up how many 60-watt lightbulbs? Try it yourself and then check your work by clicking below:

Click here for my answer to how many 60-watt lightbulbs the energy would light up.

Wow, that's a lot of light bulbs! In fact, if you assume they are all about 4 inches in diameter, then if you put this many lightbulbs side by side you would have a trail that goes farther than the distance from the Sun to Neptune. That's a long way.

That was a really big earthquake.

‹ Faults up All About Aftershocks ›
EARTH 520: Plate Tectonics and People