Kiyoo Wadati (1902-1995) was a Japanese seismologist who presented convincing evidence of deep earthquakes (>300km). He discovered what is today known as the Wadati-Benioff Zone, a region of intermediate and deep earthquake zones along oceanic trenches, which became the foundation for the plate tectonics hypothesis. Wadati graduated from the Institute of Physics, Imperial University of Tokyo. He subsequently worked at Central Meteorological Observatory during which time he discovered deep earthquakes.

Kiyoo Wadati hypothesized that earthquakes in Japan were a result of plate motion. His early research compared time curve data for the arrival of P and S waves of two earthquakes with close epicenters. The calculations demonstrated that one earthquake occurred at a depth of 30 km, while the other occurred at a depth of greater than 300 km. Wadati compiled evidence of more than a dozen earthquakes between 1924 and 1927 in the Honshu region that occurred at the same depth range. Wadati plotted data that demonstrated an inclined intermediate and deep earthquake zone near the oceanic trench dipping toward the Asiatic continent northwestward and the Philippine Sea westward. The intermediate and deep earthquake zone was named the Wadati-Bennioff zone after Hugo Benioff demonstrated that the zone existed in each area in the circumpacific region. His observations that deep earthquakes occured provided integral support for the theory of plate tectonics. 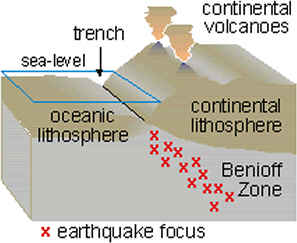 Later in his career, Wadati  plotted data for ground motion at seismic stations. He demonstrated that curves were sharper according to the magnitude of the quake. Wadati attempted to use this method to estimate the magnitude of destructiveness of earthquakes. Charles Richter later created the Richter scale based on Wadati’s methods.

Wadati studied ground subsidence while director of Osaka District Meteorological Observatory. He discovered the relationship between ground water levels, consolidation of mudstone, and subsidence in the Osaka area. His research was valued in the recovery of Japan after World War II when industrial growth contributed to increases in ground subsidence.