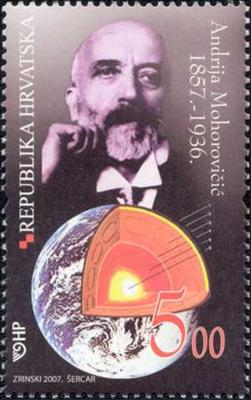 Croatian stamp created to honor Mohorovicic for being an accomplished scientist of his time.

Born on January 23, 1857 in Volosko (western Croatia),  Andrya Mohorovicic was one of the major meteorologists and seismologists of the nineteenth and twentieth centuries. Andrya's father was a blacksmith and Andrya was also in love with the sea. He married the captain's daughter and they had four sons together. After secondary school, Andrya studied math and physics in Prague and then became a teacher upon graduating and taught from 1879 to 1893 in various grammer and secondary schools. He became the head of the Meteorological Observatory in Zagreb in 1892. Andrya received a doctorate in philosophy in 1893 and in 1910 became an associate university professor. He then taught geophysics and astronomy at the university level and became a member of the Yugoslav Academy of Sciences and Arts. He retired in 1921 and passed away 15 years later in 1936.

In 1909, Andrya studied the Pokuplje earthquake and the seismic P-waves associated with this event. 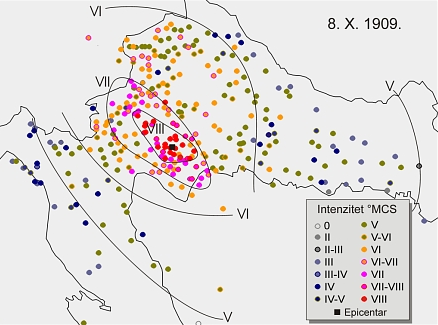 Gathered seismograph data from various stations during the 1909 Pokuplje earthquake.

Andrya Mohorovicic determined the boundary between the crust and the mantle, which is now named the Mohorovicic discontinuity. Velocities of seismic waves were used to identify this boundary. He had seismographs installed before the 1909 earthquake had occurred. His studies after the earthquake showed that there were two types of waves generated from an earthquake that pass through solid material. The waves are reflected and refracted when they come to a boundary between two types of material - in other words, the boundary between the crust and the mantle. Throughout the mantle, seismic waves have a greater velocity than through the crust. The amount of time various waves took to reach different stations allowed Mohorovicic to determine the depth of this boundary layer. Andrya studied all continents and oceans and determined that this discontinuity is present at all locations. He also came up with a function used to calculate the increasing velocity of seismic waves with increasing depth. This function is now known as Mohorovicic's law.

Image showing the P-wave and S-wave curves and travel time.

1887, created his own meteorological station located in Bakar. He also created a nephascope, which was an instrument that aided him in determining the speed and direction of the clouds. His observations and discoveries as to the movement of anticyclones, cyclones, thunderstorms, and tornadoes are still used today to determine the patterns of storm systems.

1892, calculated precise time by making observations of stars that pass through the Gric median.

1901: wrote a paper detailing the temperature drop with increased height.

Mohorovicic also created a time service for the public in Croatia.

In 1970, a crater on the dark side of the moon was named after Andrya to honor his scientific contributions.

His name is also used on Mars and the moon to describe the boundary between the crust and the mantle.

Many schools, universities, streets, cities, etc... are named in his honor.