The Rock Cycle and Plate Tectonics

Geologists use the term rock cycle to describe and simplify the complex interactions through which the three rock types can be linked to the processes that created them. One version of the rock cycle is illustrated below.

A simple animation of the rock cycle can be viewed at Exploring Earth. Follow the links through steps 2 and 3, ignoring the assignment in step 3.

Notice that oceanic crust is denser than continental crust, hence continents exist above sea level and they are a net source of sediment to the ocean basins. Also note that each plate boundary type is described by characteristic processes, some of which lead to the development of uplifted regions, while others lead to downwarped or subsided portions of crust. Subsided areas often contain thick sediment piles full of relatively fresh bedrock and mineral nutrients derived from the nearest uplifted zones. For example, where the Indian sub-continent has collided with Eurasia, a large mountain belt has risen, the Himalayas, from which enormous quantities of sediment are shed into the Bay of Bengal. 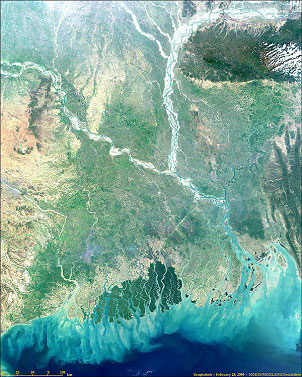 NASA satellite image of sediment derived from erosion of the Himalayas deposited into the Bay of Bengal, Bangladesh. Light blue to aquamarine colors are offshore sediments building out from the coastline due to the high rates of sedimentation.
Source: NASA

Tectonically active regions of Earth typically display characteristics and landscapes that are different from less active, more stable regions of the planet. In the next lesson, you will learn about the unique features of five geomorphic environments and settings. But now, while you've been thinking about plate tectonics, I want you to view images of landforms from tectonically active regions; remember these when you study the five geomorphic environments later.

Obviously, much of the rock cycle includes processes which operate deep within Earth's interior, the details of which fall well beyond the purview of this course. While it is important to understand that these processes occur, in this lesson we will focus on those portions of the rock cycle that are immediately relevant to and operate within the Critical Zone: weathering, erosion, and deposition. To fully understand these processes, it is as important to know the rates at which they are active, which often requires the perspective of geologic time.