Air conditioners are rated by the number of British Thermal Units (BTU) of heat they can remove per hour. Another common rating term for air conditioning size is the "ton," which is 12,000 BTU per hour.

Each air conditioner has an energy-efficiency rating that lists how many BTUs per hour are removed or “pulled out” for each watt of power it draws.

These ratings are posted on an Energy Guide Label, which must be conspicuously attached to all new air conditioners. Energy Star-labeled appliances mean that they have high EER and SEER ratings. 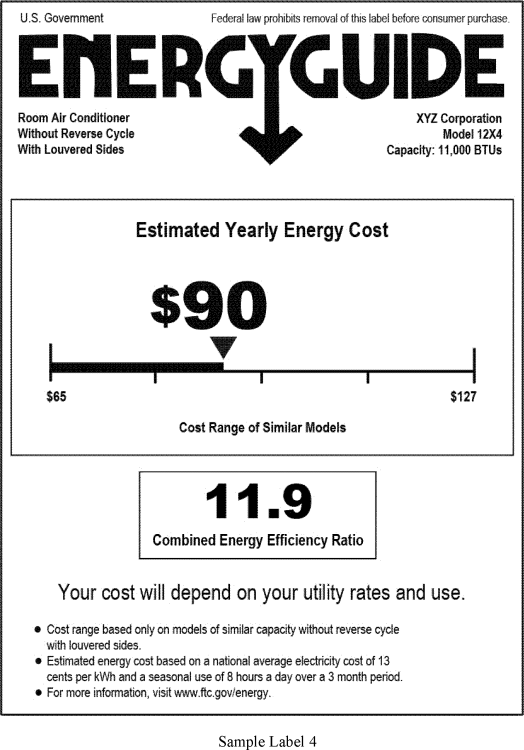 Energy Efficient Ratio (EER) measures how efficiently a room air conditioner will operate at a specific outdoor temperature. The higher the EER, the more efficient the system.

The EER can be calculated using this equation:

Remember that the EER energy-efficiency rating lists how many BTUs per hour are removed or “pulled out” for each watt of power it draws. Room air conditioners generally range from 5,500 BTU per hour to 14,000 BTU per hour.

Seasonal Energy Efficiency Ratio (SEER) measures how efficiently a central air conditioner will operate at a specific outdoor temperature. The higher the SEER, the more efficient the system.

The SEER can be calculated using this equation:

Again, the SEER energy-efficiency rating lists how many BTUs per hour are removed or “pulled out” for each watt of power it draws.

National minimum standards for central air conditioners require a SEER of 9.7 and 10.0, for single-package and split-systems, respectively. But you do not need to settle for the minimum standard—there is a wide selection of units with SEERs reaching nearly 17.

Calculate the power consumption of 5000 BTUs/h room air conditioner with an Energy Efficiency Ratio (EER) of 8.

Solution: We know that

We have an old air conditioner with an EER of 6. EER is basically Energy Efficiency Ratio which is given by number of Btus the air conditioner is pulling out per hour divided by watts of power consumed.

The room size is not changing but we are just replacing the old air conditioner with the new one. The new EER is 10, the new air conditioner EER is 10 and it is still pulling 6000 Btus per hour out and the new one, how many watts of power does it consume?

To calculate the power, we have 6000 Btu/hour load and we know the EER, which is 10, so dividing by this we get the power which is 600 watts.

So by replacing this air conditioner, which used to consume 1500 watts, by an energy efficient air conditioner with an EER of 10, we are able to bring down the power consumption to 900 watts. So that is a savings of 40% right there.

What is the annual cost for operating a 3 ton central air conditioner with an SEER of 10? Assume that the AC operates 2,000 hours in a year and the cost of electricity is 9.2 cents per kWh.

Ok. Here we are trying to compare two air conditioners both of which are going to last ten years. One consumes less power and the other one high power. They both operate for 2,400 hours annually so we have the power and we have the time of usage data. So we need to calculate how much energy each of these will consume.

So the energy consumed is given by power multiplied by time of usage. So in this case it would be 775 watts multiplied by 2,400 hours and that will be 1,860,000 watt hours.

We know the price of each of these. You know, each of the kilowatt hours. That is, it is sold at the rate of 0.08 dollars per kilowatt hour. So when you multiply that by 0.08 both sides, the cost to operate this one would be \$1,488 dollars and this one would be \$1,344 dollars. So the difference is, \$144 which means the least efficient one basically cost \$144 more and the best one would be, even if the best one is priced \$144 more, it would work out to be the same amount in the long run over 10 years. But we would be helping the environment by not burning the difference between these two kilowatt hours. You know a couple of thousand kilowatt hours over 10 years. That would be a help for the environment.

If the owner bought an air conditioner with an SEER of 15, which costs $500 more, instead of the model in the previous Illustration (7-3), what is the pay back period?

The power consumption of this new model is