Crude oil is one of the most economically mature commodity markets in the world. Even though most crude oil is produced by a relatively small number of companies, and often in remote locations that are very far from the point of consumption, trade in crude oil is robust and global in nature. Nearly 80% of international crude oil transactions involve delivery via waterway in supertankers. Oil traders are able to quickly redirect transactions towards markets where prices are higher.

Oil and coal are global commodities that are shipped all over the world. Thus, global supply and demand determines prices for these energy sources. Events around the world can affect our prices at home for oil-based energy such as gasoline and heating oil. Oil prices are high right now because of rapidly growing demand in the developing world (primarily Asia). As demand in these places grows, more oil cargoes head towards these countries. Prices in other countries must rise as a result. Political unrest in some oil-producing nations also contributes to high prices - basically, there is a fear that political instability could shut down oil production in these countries. OPEC, the large oil-producing cartel, does have some ability to influence world prices, but OPEC's influence in the world oil market is shrinking rapidly as new supplies in non-OPEC countries are discovered and developed. 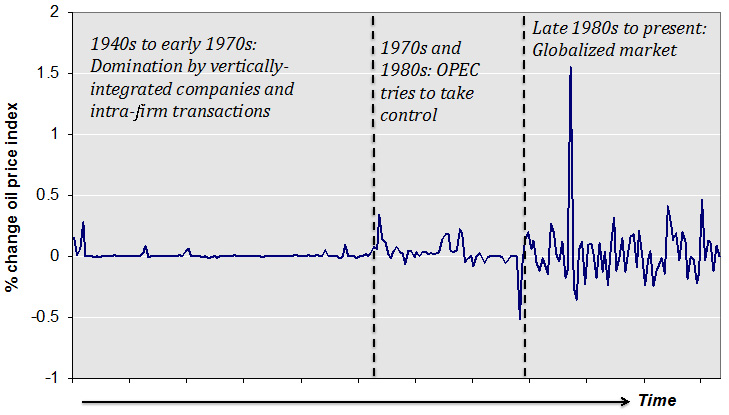 As shown in Figure 1.1, the development of our current globalized oil market can be broken down into a few different stages. The first phase was marked largely by intra-company transactions, with occasional inter-company "spot" sales. The second was defined by the emergence of OPEC and its attempts to influence an increasingly global oil trade for political ends. The third is defined by the commoditization of oil markets, with regional prices linked by inter-regional trade and the development of sophisticated financial instruments such as futures and option contracts, which we'll discuss in more detail below.

Our discussion of the world market for crude oil will be broken into a few sections. We will first focus on what's called the "spot" and "forward" market for crude oil. The term "spot market" generally refers to a short-term commodity transaction where the physical commodity changes hands very soon after the seller receives payment. Most retail consumer purchases are examples of spot transactions. When I buy a newspaper at the convenience store or a slice of pizza at the pizza shop, I get the product right after I pay for it. Forward markets refer to contracts where buyers and sellers agree up-front on a price for a commodity that will be delivered at some point in the future. When I subscribe to the newspaper and have it delivered to my house every day, I am signing a type of forward contract with the newspaper company. When I call the pizza shop and ask them to deliver a pizza to my house one hour or one day from now, then I am also engaging in a type of forward contract.

We will also discuss "futures" markets for crude oil. The difference between futures and forward markets can be confusing at times. The primary difference is that a futures contract is a highly standardized commodity sold through a financial exchange, rather than a highly customizable contract bought and sold through one-on-one transactions. Futures markets do have the advantage that they have been able to attract many more buyers and sellers than forward markets.

Finally, we will spend time in this lesson learning where to find data on global oil markets and discussing the issue of "peak oil" - whether world oil reserves are dwindling or whether there is actually enough to support rising oil consumption over the coming decades. There is more data on the web that you might think, but the difficulty is in knowing where to find exactly what you are looking for.

‹ Overview up Beginnings of a Market to 1970 ›
EME 801: Energy Markets, Policy, and Regulation