Regions within geopolitics are social constructs that reflect certain perspectives and judgments in making particular groupings. Flint highlights that there are regional groupings that are determined by physical proximity to each other—i.e., the desert region of Africa or the mountainous region of South America. Or we may also think of geopolitical groupings like Western Europe or the Middle East. In some ways, this categorization helps us to try to group like things together, but such simplification tends to assume a homogeneity that isn’t actually there. The physical geography, as well as the cultural, religious, political, economic, and social aspects of the communities and citizens within each Western European or Middle Eastern country is actually quite diverse and not properly represented in a singular identity. Furthermore, as Flint explains, “Regions should be seen not only as a form of labeling or classification but also as the result of the construction of political institutions.” Here, he is referring to the creation of functional regions such as the European Union (EU), the North American Free Trade Association (NAFTA), and the Association of Southeast Asian Nations (ASEAN), to name a few.

To understand regional groupings is to understand what is going on geopolitically at that time. For example, a reference to the “First World” or “Third World” is a reference to geopolitical categories created during the Cold War when the West (the First World) was battling major Communist powers (the Second World) for influence over non-aligned countries (the Third World). 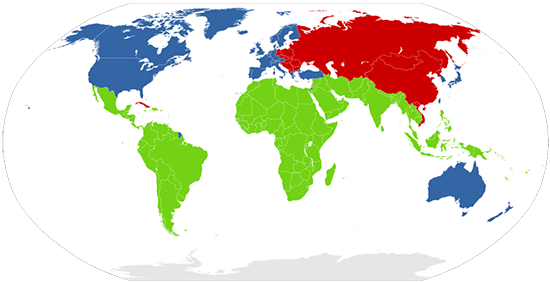 After the fall of the Berlin Wall and the breakup of the Union of Soviet Socialist Republics (USSR), this terminology is no longer quite as meaningful – though we certainly see its use in various settings. Nonetheless, it’s important to know the origins of such terminology and groupings.

The concept of the Global North and the Global South is also an important one to think about geographically and geopolitically. Also an extension of Cold War geopolitics, the Brandt line (essentially the line that separates blue and red) shows the north-south divide. The Brandt line image below has been updated to include countries like South Africa, Singapore, and Taiwan. The Brandt line shows the more economically developed countries (MEDCs) in blue and the less economically developed countries (LEDCs) in red.

If you compare the two maps above, you’ll notice that the First and Second World comprise the Global North, while the non-aligned or the Third World countries comprise the Global South. The competition between the First and Second Worlds was not just ideological, but one that vied for non-aligned countries to choose their economic development trajectory: Capitalism or Communism.

‹ The Politics of Scale up Territory as Political Space ›
GEOG 128: Geography of International Affairs