Thus far, we have really focused on the ability of agents to make strategic geopolitical choices and decisions and how these choices are complicated by competing goals and changing circumstances. However, decisions are not made in a social and political vacuum.

Our ability to make choices is an important aspect of our everyday lives. This ability affords us some modicum of control in a very complex socio-political landscape. Indeed, our ability to make key decisions is an exercise of our personal agency. This agency aids in our strategic navigation and negotiation of social, political, cultural, and economic terrain so that we can work towards social, cultural, financial (etc.) security. But, as the last paragraph highlighted, we make these decisions within a structure that shapes and constrains the selection of choices and decisions we have to make. This is certainly true at the individual scale—and now we will investigate how geopolitical structure works at the national and global scales.

As Flint (2016) explains, “One of the benefits of this (the Modelski) model is an understanding of global politics that is based on empirical observation. In contrast, the classical geopoliticians of the nineteenth and early twentieth century invoked a ‘God’s eye view of the world,’ providing simple histories or theories that, they claimed, not only explained what has happened in the past but suggested particular policies inform the actions of their own country in a global competition with others (Parker, 1985). In other words, geopoliticians make dubious claims of historical and theoretical ‘objectivity’ to support their own biased view of how their country should compete in the world.” (p. 217)

Thus, as we make our own policy recommendations for our DVPM projects, we should understand how these fit in with global geopolitical structures; how these structures shape agency; and also how such policies and actions are justified through various geopolitical claims, as mentioned above.

Modelski’s model of geopolitics is not capable of predicting events. It is a historical model that interprets a wealth of historic data in a simplified framework. In other words, it is a descriptive model. Also, Modelski’s model is useful, but only within certain parameters. His view of geopolitics is limited to conflicts between the major powers; smaller countries and geopolitical actors that are not countries are not included in this model. However, the model is useful for introducing the idea of a geopolitical structure and offering a context for current geopolitical events.

George Modelski, who presented his ideas in the book, Long Cycles in World Politics (1987), is the chief architect of long cycle theory. In a nutshell, long cycle theory describes the connection between war cycles, economic supremacy, and the political aspects of world leadership.

Long cycles, or long waves, offer interesting perspectives on global politics by permitting "the careful exploration of the ways in which world wars have recurred, and lead states such as Britain and the United States have succeeded each other in an orderly manner." The long cycle is a period of time lasting approximately 70 to 100 years. Modelski divides the long cycle into four phases. When periods of global war, which could last as much as one-fourth of the total long cycle, are factored in, the cycle can last from 87 to 122 years.

Many traditional theories of international relations, including the other approaches to hegemony, believe that the baseline nature of the international system is anarchy. Modelski's long cycle theory, however, states that war and other destabilizing events are a natural product of the long cycle and larger global system cycle. They are part of the living processes of the global polity and social order. Wars are "systemic decisions" that "punctuate the movement of the system at regular intervals." Because "world politics is not a random process of hit or miss, win or lose, depending on the luck of the draw or the brute strength of the contestants," anarchy simply doesn't play a role. After all, long cycles have provided, for the last five centuries, a means for the successive selection and operation of numerous world leaders.

Modelski used to believe that long cycles were a product of the modern period. He suggests that the five long cycles, which have taken place since about 1500, are each a part of a larger global system cycle, or the modern world system. Under the terms of long cycle theory, five hegemonic long cycles have taken place, each strongly correlating to economic Kondratieff Waves (or K-Waves). The first hegemon would have been Portugal during the 16th century, then the Netherlands during the 17th century. Next, Great Britain served twice, first during the 18th century, then during the 19th century. The United States has been serving as hegemon since the end of World War II. 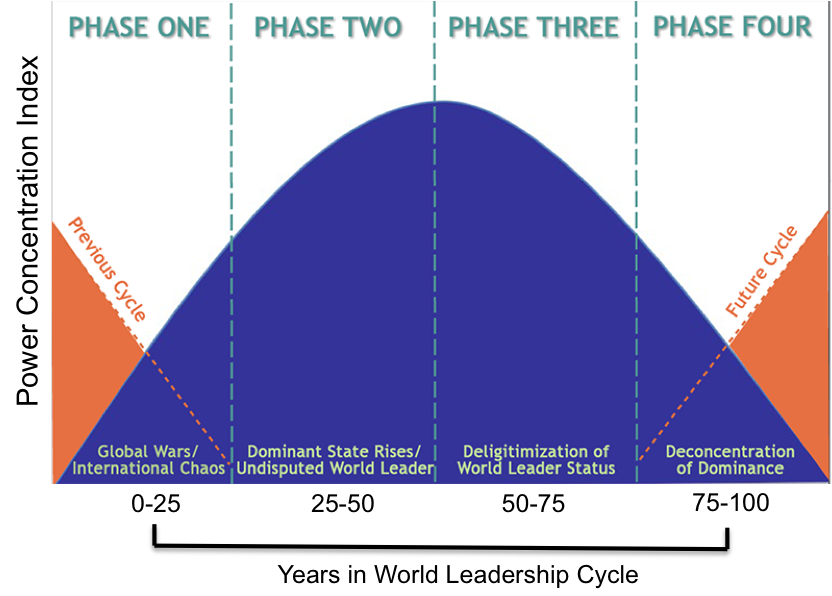 Modelski’s model is a historically based theory founded on his interest in naval history. Some key elements of his theory are:

Flint calls our attention to the representation of world powers in Modelski’s model. They are referred to as “leaders” rather than hegemons or super powers. This is important because it implies that other countries are “willing followers”, whereas the representations of hegemons and super powers acknowledge the relationship of dominance and use of force (economic, military, or otherwise).

The US's rise into world leadership after World Wars I & II corresponds to the global war phase of Modelski’s model. During that time, there was a high preference for world order, but generally a low availability of world order. The US was well poised to take the charge in the post-WWII geopolitical landscape. Flint provides a thorough analysis of the ways in which the US fits into the Modelski model on pages 230-232. It is a good example that can help you better understand some of the more abstract aspects of the Modelski model within a specific context.

Lastly, Flint discusses the legacy of world leadership by exploring “feedback systems in Modelski’s model” (p. 237). The first feedback system is the “developmental loop”—which explains that the “innovations” brought about by world leaders remain even after their time as a world leader expires. Flint provides the example of the United States—presumably, the innovations of the idea of self-determination as well as institutions such as the United Nations, World Bank and the like, will continue to play a role in future global geopolitics. They may shift and change, but their foundation has been established and thus they will continue to have some influence (even if altered) going forward.

The second feedback system is a “regulatory loop” that “examines the process of an emerging challenger and the establishment of a new world leader” (p. 237). While Flint reminds us that the Modelski model is not a predictive model, it does highlight some historical patterns that can give us insight into possible future outcomes. In particular, he explains that the next world leader does not typically fall to the challenger of the current world leader. Rather, the next world leader is usually one of the coalitions or allied countries. For example, the case of the US and Great Britain followed this process. Germany challenged Great Britain’s role as world leader, which brought on two world wars. Germany needed allies/a coalition to challenge Great Britain’s leadership status. Great Britain, in turn, could not fight off the challenger alone and needed to establish a coalition of allied forces to fend off Germany. Flint explains that both the previous leader (Great Britain) and its challenger (Germany) exhausted their material capacity for power in the long phase of the global war (WWI & WWII). But the US became an increasingly prominent member of the world leaders’ coalition and at the end of the wars, was able to assume the “preeminent global position”. Thus, Flint explains, we might look at this pattern in history to make an educated guess that the next nation to rise to world power will be among the US’s allies, rather than its adversaries.

However, Flint does caution us that the Modelski model views global geopolitics through a prism that only considers the state to be a key strategic actor. The rise of non-state actors as legitimate threats complicates the model in a way that is yet to be resolved.