Geographers often seek to categorize places using a scale of development, frequently dividing nations into the "developed" and "developing," "first world" and "third world," or "core" and "periphery." All of these labels are based on judging a country's development, but this raises the question: what exactly does it mean to be "developed," and why have some countries developed while others have not? Since the beginning of the twentieth century, geographers and those involved with the vast field of Development Studies have sought to answer this question, and in the process, have come up with many different models to explain this phenomenon.

W.W. Rostow and the Stages of Economic Growth

One of the key thinkers in twentieth-century Development Studies was W.W. Rostow, an American economist, and government official. Prior to Rostow, approaches to development had been based on the assumption that "modernization" was characterized by the Western world (wealthier, more powerful countries at the time), which were able to advance from the initial stages of underdevelopment. Accordingly, other countries should model themselves after the West, aspiring to a "modern" state of capitalism and a liberal democracy. Using these ideas, Rostow penned his classic Stages of Economic Growth in 1960, which presented five steps through which all countries must pass to become developed: 1) traditional society, 2) preconditions to take-off, 3) take-off, 4) drive to maturity and 5) age of high mass consumption. The model asserted that all countries exist somewhere on this linear spectrum, and climb upward through each stage in the development process:

Rostow's Stages of Growth model is one of the most influential development theories of the twentieth century. It was, however, also grounded in the historical and political context in which he wrote. Stages of Economic Growth was published in 1960, at the height of the Cold War, and with the subtitle "A Non-Communist Manifesto," it was overtly political. Rostow was fiercely anti-communist and right-wing; he modeled his theory after western capitalist countries, which had industrialized and urbanized. As a staff member in President John F. Kennedy's administration, Rostow promoted his development model as part of U.S. foreign policy. Rostow's model illustrates a desire not only to assist lower income countries in the development process but also to assert the United States' influence over that of communist Russia. 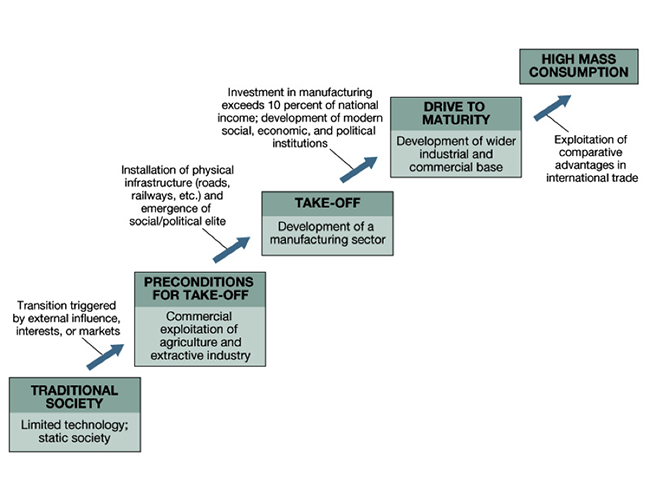 The flowchart starts at the bottom left with traditional society and moves up and to the right through the following steps.

b. Transition triggered by external influence, interests, or markets

a. Commercial exploitation of agriculture and extractive industry

b. Installation of physical infrastructure (roads, railways, etc.) and emergence of social/political elite

a. Development of a manufacturing sector

b. Investment in manufacturing exceeds 10% of national income; development of modern social, economic, and political institutions

a. Development of wider industrial and commercial base

b. Exploitation of comparative advantages in international trade

Rostow's principal argument is that some places have progressed further than others in terms of economic development (as represented by the map of GNP). Rostow believes that poorer places are in an initial or beginning stage of development, while countries with higher levels of GNP are in a later stage of higher development. All places, therefore, are at some stage in a development sequence.

The sequence of development that Rostow outlines include the following five stages:

These stages suggest that a society moves from a traditional phase which is characterized by a lack of exposure to Western society, a lack of science or technology, a dependence on agriculture, and a high level of poverty to a modernized, industrialized, and developed economy. Rostow argues that through increased investment, increased exposure to modernized, Western society, and changes in traditional culture and values, societies will become more highly developed.

What is presumed goal and model?

The goal is industrialized, capitalist liberal democracy; the U.S. is the model. Modernization theory is basically a diffusionist theory: the premise is that development in the U.S. and Europe can be copied elsewhere. It purports that what developing countries need is at least an initial stimulus from an outside source, a developed country perhaps, to jumpstart the process. It, therefore, posits that internal development is unlikely.  [Note the focus on external stimulus: how did it happen in the first cases, then?]

Industrialization, urbanization, and trade in the vein of Rostow's model are still seen by many as a roadmap for a country's development. Singapore is one of the best examples of a country that grew in this way and is now a notable player in the global economy. Singapore is a southeast Asian country with a population of over five million, and when it became independent in 1965, it did not seem to have any exceptional prospects for growth. However, it industrialized early, developing profitable manufacturing and high-tech industries. Singapore is now highly urbanized, with 100% of the population considered "urban." It is one of the most sought-after trade partners in the international market, with a higher per-capita income than many European countries.

As the Singapore case shows, Rostow's model still sheds light on a successful path to economic development for some countries. However, there are many criticisms of his model. While Rostow illustrates faith in a capitalist system, scholars have criticized his bias towards a western model as the only path towards development. Rostow lays out five succinct steps towards development and critics have cited that all countries do not develop in such a linear fashion; some skip steps or take different paths. Rostow's theory can be classified as "top-down," or one that emphasizes a trickle-down modernization effect from urban industry and western influence to develop a country as a whole. Later theorists have challenged this approach, emphasizing a "bottom-up" development paradigm, in which countries become self- sufficient through local efforts, and urban industry is not necessary. Rostow also assumes that all countries have a desire to develop in the same way, with the end goal of high mass consumption, disregarding the diversity of priorities that each society holds and different measures of development. For example, while Singapore is one of the most economically prosperous countries, it also has one of the highest income disparities in the world. Finally, Rostow disregards one of the most fundamental geographical principals: site and situation. Rostow assumes that all countries have an equal chance to develop, without regard to population size, natural resources, or location. Singapore, for instance, has one of the world's busiest trading ports, but this would not be possible without its advantageous geography as an island nation between Indonesia and Malaysia.

In spite of the many critiques of Rostow's model, it is still one of the most widely cited development theories and is a primary example of the intersection of geography, economics, and politics.

Import substitution industrialization (ISI) is a trade and economic policy that advocates replacing foreign imports with domestic production. ISI is based on the premise that a country should attempt to reduce its foreign dependency through the local production of industrialized products. Early European merchants and manufacturers as far back as the 1400s became adept at import substitution (copying and making goods previously only available by trading). This process facilitated the rise of Western Europe as a core region of the world (Knox & Marston, 2013).

As a contemporary economic development strategy, import substitution industrialization is much more challenging. The goal here is to develop a diversified economy, rather than specialize in a primary commodity.

Export-Led Trade Based on Comparative Advantage

The export-led growth paradigm rose to prominence in the late 1970s when it replaced the import-substitution paradigm that had dominated development policy thinking (especially in Latin America) in the thirty years after World War II. Export-led growth is a development strategy aimed at growing productive capacity by focusing on foreign markets.

Mainstream examples would probably include coffee in Peru and parts of sub-Sarahan Africa; low-wage labor forces for manufacturing in Vietnam, Thailand, Mexico; software from Silicon Valley and Seattle; etc.

Comparative Advantage: The advantage in the production of a product enjoyed by one country over another.

This is the model favored by most mainstream economists and by major international institutions such as the World Bank and IMF.

This is Gerschenkron's concept of the late developers. His idea was that there were countries in Europe that wanted to follow in the industrial footsteps of Britain. The problem was, how could they compensate for the huge lead that Britain had already developed? If you wanted to get into the game, you had to come in incredibly big. You had to have leading-edge technology, and you had to raise or save huge amounts of capital to compensate for the lead that Britain had, and come on board producing with the very latest technology and competing aggressively for market share. There are advantages to late development, though: you can learn from your predecessors' mistakes, borrow their best and latest approaches, and plan the timing of your market entry.

An example of this at the firm level would be the car manufacturer, Kia. This South Korean company has had tremendous growth in US sales over the past six years, basically by replicating Honda’s earlier strategy of producing basic, reliable cars for the very low end of the market. Kia did exactly what Honda did starting in the 1970s, but with even cheaper cars, more efficient production methods, and a lot of help from the South Korean government.

Compatible w/ any of above, coordinated by the state to reduce inefficiencies.

There is no one formula that works equally well for all countries. Each of the models or strategies above will or won’t work (in the form mentioned or in some hybrid or modified form) depending upon historical contingencies, government structure, geopolitical positioning, environmental resource endowments, and so forth. And, of course, the international organization of the global economy—how the rules are made, regulated and evolve over time will work to determine how any one strategy will fare in the global market.

Nonetheless, though each country has its own set of circumstances that facilitate its economic development path, all countries and their economies are linked to the global economy. One way to learn more about this is to investigate global commodity chains (also known as the “global assembly line”) that produce our everyday products.