As a starting point for understanding climate change, we should recognize the difference between climate and weather. The difference is essentially a difference in scale. Climate refers to broad-scale trends in meteorological phenomena such as temperature, precipitation, and wind. Weather refers to local-scale instances of these same phenomena. Mark Twain once famously said: “Climate is what we expect, weather is what we get.” Climate patterns are identified by averaging the meteorological conditions over a long span of time (generally 30 years or more), allowing us to generalize what the weather conditions tend to look like for a given location and time of year. For instance, looking at the chart below from the Pennsylvania State Climatologist’s Office (link: http://www.climate.psu.edu), we know that average high temperatures in July for Harrisburg, PA tend to be in the mid-80s (F). However, depending on the weather conditions during a particular year, actual values of meteorological data can end up above or below a climatological average. During July 2020, for example, anomalously warm weather conditions led to an average high temperature of 92 degrees F – several degrees higher than the average conditions.

Although changes in climate regimes have occurred numerous times throughout Earth’s history, a key distinction of modern (21st century) climate change is the impact of human activity on climate. In particular, emissions from industrial sectors are leading to an increase in the concentration of greenhouse gases in the lower atmosphere. The chemical composition of these greenhouse gases (e.g., carbon dioxide, methane) leads to absorption of surface radiation, ultimately increasing the amount of heat stored in the lower atmosphere. Over time, this net increase in global heat storage has led to rapid (climatologically-speaking) rates of warming. These human impacts on climate change are referred to as anthropogenic climate change. Although natural drivers of climate change do exist (e.g., the cycle of Earth’s axis position), these natural impacts by themselves would suggest little changes to Earth’s climate regime at the present, except perhaps for a minor cooling trend. Thus, given the current strong warming rate, anthropogenic sources are the clear main drivers of modern climate change. 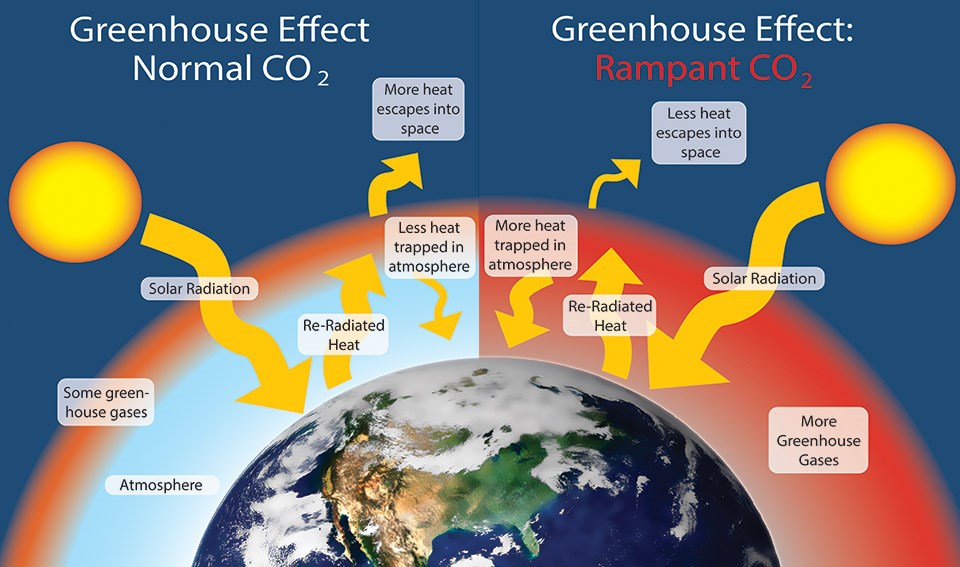 The bottom line: the physical basis for climate science is complicated and an area of extensive research, but the existence of anthropogenic climate change is scientifically-proven fact. Further, the rate at which the climate is changing is unprecedented, creating substantial concern for what climate conditions could be even within the next few decades.

The Human Dimensions of Climate Change

The remainder of this module focuses on the human dimensions of climate change, in particular how humans are impacted by climate change and how humans are responding to climate change. There are two main ways in which humanity is responding to climate change: mitigation and adaptation. Mitigation refers to efforts to reduce the amount of climate change that will occur via reducing the amount of greenhouse gases in the atmosphere. Adaptation refers to efforts to improve the impacts of whatever climatic changes end up occurring. Exactly what is meant by an “improvement” to the impacts is an ethics question. Similarly, there are ethics questions in what mitigation efforts humanity should make.

The relationship between climate change, mitigation, and adaptation can be seen in a simple systems diagram: