The Amazon in context

Tropical rainforests are often considered to be the “cradles of biodiversity.” Though they cover only about 6% of the Earth’s land surface, they are home to over 50% of global biodiversity. Rain forests also take in massive amounts of carbon dioxide and release oxygen through photosynthesis, which has also given them the nickname “lungs of the planet.” They also store very large amounts of carbon, and so cutting and burning their biomass contributes to global climate change. Many modern medicines are derived from rainforest plants, and several very important food crops originated in the rainforest, including bananas, mangos, chocolate, coffee, and sugar cane. 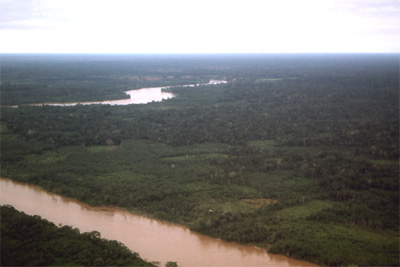 In order to qualify as a tropical rainforest, an area must receive over 250 centimeters of rainfall each year and have an average temperature above 24 degrees centigrade, as well as never experiencing frosts. The Amazon rainforest in South America is the largest in the world. The second largest is the Congo in central Africa, and other important rainforests can be found in Central America, the Caribbean, and Southeast Asia. Brazil contains about 40% of the world’s remaining tropical rainforest. Its rainforest covers an area of land about 2/3 the size of the continental United States.

There are countless reasons, both anthropocentric and ecocentric, to value rainforests. But they are one of the most threatened types of ecosystems in the world today. It’s somewhat difficult to estimate how quickly rainforests are being cut down, but estimates range from between 50,000 and 170,000 square kilometers per year. Even the most conservative estimates project that if we keep cutting rainforests as we are today, within about 100 years there will be none left.

How does a rainforest work?

Rainforests are incredibly complex ecosystems, but understanding a few basics about their ecology will help us understand why clear-cutting and fragmentation are such destructive activities for rainforest biodiversity. 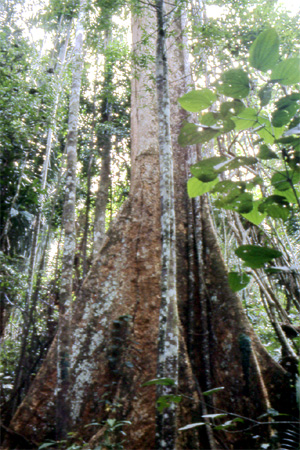 High biodiversity in tropical rainforests means that the interrelationships between organisms are very complex. A single tree may house more than 40 different ant species, each of which has a different ecological function and may alter the habitat in distinct and important ways. Ecologists debate about whether systems that have high biodiversity are stable and resilient, like a spider web composed of many strong individual strands, or fragile, like a house of cards. Both metaphors are likely appropriate in some cases. One thing we can be certain of is that it is very difficult in a rainforest system, as in most others, to affect just one type of organism. Also, clear cutting one small area may damage hundreds or thousands of established species interactions that reach beyond the cleared area.

Pollination is a challenge for rainforest trees because there are so many different species, unlike forests in the temperate regions that are often dominated by less than a dozen tree species. One solution is for individual trees to grow close together, making pollination simpler, but this can make that species vulnerable to extinction if the one area where it lives is clear cut. Another strategy is to develop a mutualistic relationship with a long-distance pollinator, like a specific bee or hummingbird species. These pollinators develop mental maps of where each tree of a particular species is located and then travel between them on a sort of “trap-line” that allows trees to pollinate each other. One problem is that if a forest is fragmented then these trap-line connections can be disrupted, and so trees can fail to be pollinated and reproduce even if they haven’t been cut.

The quality of rainforest soils is perhaps the most surprising aspect of their ecology. We might expect a lush rainforest to grow from incredibly rich, fertile soils, but actually, the opposite is true. While some rainforest soils that are derived from volcanic ash or from river deposits can be quite fertile, generally rainforest soils are very poor in nutrients and organic matter. Rainforests hold most of their nutrients in their live vegetation, not in the soil. Their soils do not maintain nutrients very well either, which means that existing nutrients quickly “leech” out, being carried away by water as it percolates through the soil. Also, soils in rainforests tend to be acidic, which means that it’s difficult for plants to access even the few existing nutrients. The section on slash and burn agriculture in the previous module describes some of the challenges that farmers face when they attempt to grow crops on tropical rainforest soils, but perhaps the most important lesson is that once a rainforest is cut down and cleared away, very little fertility is left to help a forest regrow.

What is driving deforestation in the Amazon?

Many factors contribute to tropical deforestation, but consider this typical set of circumstances and processes that result in rapid and unsustainable rates of deforestation. This story fits well with the historical experience of Brazil and other countries with territory in the Amazon Basin.

Population growth and poverty encourage poor farmers to clear new areas of rainforest, and their efforts are further exacerbated by government policies that permit landless peasants to establish legal title to land that they have cleared.

At the same time, international lending institutions like the World Bank provide money to the national government for large-scale projects like mining, construction of dams, new roads, and other infrastructure that directly reduces the forest or makes it easier for farmers to access new areas to clear.

The activities most often encouraging new road development are timber harvesting and mining. Loggers cut out the best timber for domestic use or export, and in the process knock over many other less valuable trees. Those trees are eventually cleared and used for wood pulp, or burned, and the area is converted into cattle pastures. After a few years, the vegetation is sufficiently degraded to make it not profitable to raise cattle, and the land is sold to poor farmers seeking out a subsistence living.

Regardless of how poor farmers get their land, they often are only able to gain a few years of decent crop yields before the poor quality of the soil overwhelms their efforts, and then they are forced to move on to another plot of land. Small-scale farmers also hunt for meat in the remaining fragmented forest areas, which reduces the biodiversity in those areas as well.

Another important factor not mentioned in the scenario above is the clearing of rainforest for industrial agriculture plantations of bananas, pineapples, and sugar cane. These crops are primarily grown for export, and so an additional driver to consider is consumer demand for these crops in countries like the United States.

These cycles of land use, which are driven by poverty and population growth as well as government policies, have led to the rapid loss of tropical rainforests. What is lost in many cases is not simply biodiversity, but also valuable renewable resources that could sustain many generations of humans to come. Efforts to protect rainforests and other areas of high biodiversity is the topic of the next section.