“Extinction is the most irreversible and tragic of all environmental calamities. With each plant and animal species that disappears, a precious part of creation is callously erased.” -Michael Soulé, noted American conservation biologist

It is estimated that the current rate of species extinction is between 1,000 and 100,000 times more rapid than the average rate during the last several billion years. The growth of human populations, consumption levels, and mobility is the root of most of the serious threats to biodiversity today.

While learning about the negative impacts of humans on biodiversity, please keep a few things in mind. First, it is rare that humans intend to make a species go extinct or to threaten biodiversity in some other way. Usually, those impacts are the unfortunate by-products of people trying to provide a decent living for themselves or to serve some other purpose. Second, in the last 30 years or so, efforts to protect and preserve biodiversity have expanded exponentially. We will explore those efforts later in the module. As you learn about the current threats to biodiversity, resist the temptation to conclude that humans are simply foolish or short-sighted or greedy, and instead consider the larger pressures and systems that lead toward biodiversity loss.

There are many threats to biodiversity today. The biggest ones can be remembered by using the acronym H.I.P.P.O.: Habitat Loss, Invasive Species, Pollution, Human Population, and Overharvesting.

This occurs when a particular area is converted from usable to unusable habitat. Industrial activities, agriculture, aquaculture, mining, deforestation, and water extraction are all central causes of habitat loss. This includes deforestation for wood for cooking food. Habitat fragmentation, the loss of large units of habitat, is also a serious threat to biodiversity. The picture below shows an example of habitat fragmentation in the Amazon rainforest. 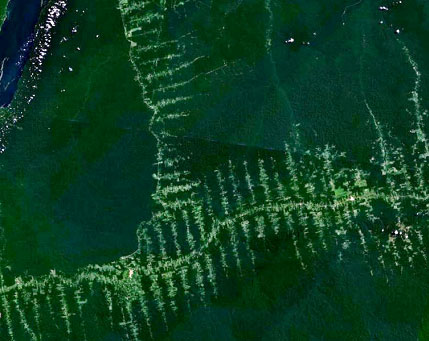 When an animal, plant, or microbe moves into a new area, it can affect the resident species in several different ways. New species can parasitize or predate upon residents, hybridize with them, compete with them for food, bring unfamiliar diseases, modify habitats, or disrupt important interactions. One famous and striking example of an invasive species is the brown tree snake in Guam. Native to Australia, the snake was accidentally transported to Guam in ship cargo following World War II. Because Guam had basically no predators to keep the snake population in check, it rapidly multiplied and caused the extirpation of most of the resident bird species. Extirpation means extinction within a region: the species survives elsewhere, but not in that region. 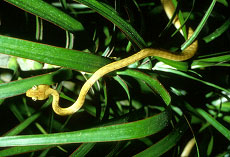 The discharge of toxic synthetic chemicals and heavy metals into the environment has a huge impact on species abundance and can lead to extinctions. It’s important to remember that substances that are “natural” can become pollution when they are too abundant in a certain area. For example, nitrogen and phosphorous are important nutrients for plant growth, but when they concentrate in water systems after being applied as agricultural fertilizers, they can cause “dead zones” that are uninhabitable for fish and other wildlife. Also, carbon dioxide is a “natural” component of the atmosphere but is considered a pollutant when emitted by human industrial activities.

Bioaccumulation is an important concept connected with pollution. This is the process of chemicals becoming increasingly concentrated in animal tissues as they move up the food chain. Killer whales provide an example of how bioaccumulation can be a serious problem for biodiversity, and especially for marine mammals. Many agricultural and industrial chemicals are persistent organic pollutants (POPs), which do not seem to cause biological damage at very low concentrations. However, these POPs are easily incorporated into organisms like bacteria, phytoplankton, and other invertebrates at the bottom of marine food chains. As those organisms are eaten by fish, and fish are eaten by marine mammals, the POPs move up the food chain. If a killer whale eats 100 king salmon, she incorporates all the POPs that were in those salmon into her body tissues, meaning that over time the concentrations of POPs in her body can become quite high. At these higher concentrations, many POPs have been shown to cause disruptions to hormone levels and immune systems, and increase birth defects. Anything that eats high on the food chain (such as humans!) is at risk of impacts from bioaccumulation of toxins.

In the year 1800, there were fewer than 1 billion people on earth, and today there are about 6.8 billion. Even without the vast increases in per capita resource use that have occurred during this period, the pressures on biodiversity would have increased during this time period simply based on population growth. While the impacts that each human has on biodiversity varies widely depending on the types and amounts of resources that he or she uses (as in the I=PAT equation), overall, increasing populations have lead to increasing threats to biodiversity.

This includes targeted hunting, gathering, or fishing for a particular species as well as incidental harvesting such as bycatch in ocean fisheries. The megafauna extinction example earlier was an example of overharvesting causing biodiversity loss.

Ocean fisheries have been particularly vulnerable to overharvesting during the post-WWII period because of technological developments like refrigeration, sonar, larger nets, and onboard processing. The cod fishery in the Northwestern Atlantic Ocean was an important commercial fishery for hundreds of years, but only a few decades of intense harvesting using these new technologies in the late twentieth century led to a population collapse. The population declined by over 90%, and fishing for the species was closed in both Canada and the United States. The loss of a top predator like cod, along with reductions of other top predator fish populations like haddock and flounder, has led to an explosion in prey fish populations like herring, capelin and shrimp. Cod populations have not recovered, despite fishing pressures ceasing, and this observation has made researchers speculate that the ecosystem may now be in an alternative stable state that will prevent the recovery of cod populations any time in the near future.

Interactions among drivers of biodiversity loss

As explained above, in most places, more than one of these factors is having an impact on biodiversity. It often requires a closer look at a particular place to understand the interplay between habitat loss, invasive species, human population, pollution, overharvesting, and other factors that affect biodiversity. For example, an increasing human population with high meat-consumption patterns and loose environmental regulations may increase deforestation rates for agriculture and cattle grazing, resulting in habitat loss and nitrogen pollution from synthetic fertilizers. Arguably, human population is not a driver of biodiversity loss in and of itself, but it tends to intensify and interact with other drivers.

In Module 9, we saw that climate change is impacting ecosystems in several ways, including via temperature shifts. These shifts are making it difficult or even impossible for many species to survive. As the climate changes more and more, biodiversity will face ever greater threats. Likewise, efforts to conserve biodiversity will face ever greater challenges. Indeed, some are starting to speak about conservation triage as a situation in which not all species can be saved, forcing conservationists to decide which species to protect. This use of the term triage is adapted from its use in medical crises, such as in emergency response to natural disasters.

Please read the article Climate change turns conservationists into triage doctors, written by Sharon Oosthoek for the Canadian Broadcasting Corporation. The CBC is Canada's national public media organization, analogous to the Public Broadcasting Service in the United States. This article describes the desperate situation that biodiversity conservationists are finding themselves in given the stresses that climate change is putting on ecosystems. As you read this article, consider the following questions:

1) How does conservation triage as described in the article compare to medical triage conducted in emergency response to natural disasters?

2) How would you decide which species to protect in a conservation triage scenario?

3) What are the implications of the conservation triage scenario to decisions about reducing greenhouse gas emissions?