This chapter discusses the fifth step of the SGAM, highlighted below in gold, Develop Conclusions and Report. 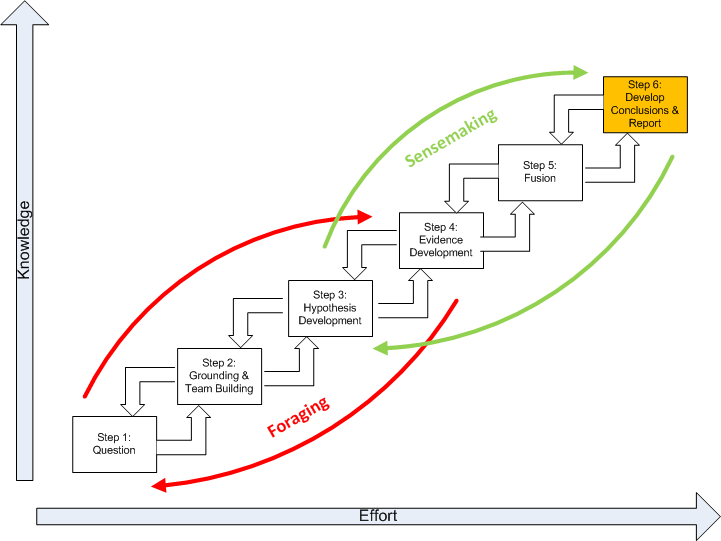 The matrix gives an overview of all the evidence for and against all the hypotheses. Proceed by rejecting or eliminating hypotheses, while tentatively accepting only those hypotheses that cannot be refuted. Critically, the matrix should not dictate the conclusion. It simply reflects your judgment of what is important and how these important factors relate to the probability of each hypothesis. The matrix is an aid to thinking and analysis, to ensure consideration of all the possible interrelationships between evidence and hypotheses and identification of those few items that really swing your judgment on the issue.

If there is any concern at all about denial and deception, look at the sources of your key evidence. When analysis turns out to be wrong, it is often because of key assumptions that went unchallenged and proved invalid. The problem is to determine which assumptions merit questioning.

When writing your report, identify critical assumptions that went into your interpretation and note that your conclusion is dependent upon the validity of these assumptions. The written argument for a certain judgment is incomplete without a discussion of alternative judgments that were considered and why they were rejected. An analytical conclusion is always tentative. The situation may change, or it may remain unchanged while you receive new information that alters your appraisal. To address this, specify in advance milestones one should look for or be alert to that, if observed, would suggest a significant change in the probabilities.