On a global scale, the potential for geothermal energy is quite large. The IPCC estimates that even though just a fraction of the total heat within the Earth can be used to generate geothermal power, we could nevertheless generate about 90 EJ of energy per year, and this is energy that is constantly renewed from within the Earth. Keep in mind that at present, we generate just over 2 EJ per year, so this energy source can definitely expand, but by itself it cannot meet the total global energy demand of 600 EJ.

To harness geothermal energy to generate electricity using any conventional technology (dry steam, flash steam or binary steam), you’ve got to be in the right place, where there is just the right amount of hot fluid or steam in an accessible reservoir. Unfortunately, those places are few and far between. The figure below shows a map of geothermal resources in the U.S., with identified conventional sites marked with dots on the map. All are located in just a handful of western states, plus Alaska. 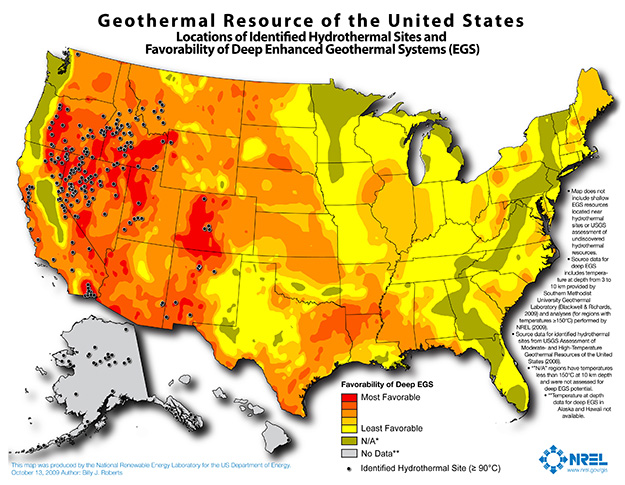 The state of Alaska is known more for oil and gas than for renewable energy resources, but the remote nature of many Alaskan communities calls for different energy solutions that we might use in a more connected part of the world. This video shows how some remote areas of Alaska are using locally-sourced renewable energy to power their communities, rather than relying so much on crude oil that makes up much of the state's economic bounty.

Narrator: Sometimes when Americans hear energy, the next word that comes to mind is crisis. It really doesn't have to be that way. Shirley Jackson, former head of the Nuclear Regulatory Commission, and now president of one of America's leading technical universities, thinks the United States is actually well-placed. Well, the U.S. is lucky because we have such a diversity of climates and diversity of geologies and in the end, diversity of actual energy sources. And that, in fact, makes us very fortunate compared to other parts of the world. They may have a given source of energy, but they don't have the multiple sources.

Narrator: Alaska, like the rest of America, has been addicted to oil. Now, can abundant sustainable options make it America's renewable state? Kodiak Island, Alaska at 3,600 square miles is about half the size of New Jersey. Getting around almost always involves a boat, or a plane, or a float-plane that's a bit of both. Kodiak's population is less than 14,000, leaving most of the island undeveloped and natural. That beauty is one of Kodiak's economic assets, bringing tourists to watch bears raising cubs and catching fish. Kodiak's human population also catches salmon, with fish exports providing another key source of jobs and income. The island wants to limit imports of dirty and expensive fossil fuels, and tap natural resources to supply as much clean and locally generated energy as possible. Fuel prices, because we live on an island, are very expensive. You know, you learn pretty quickly that you need an alternative.

Narrator: Kodiak was the first place in Alaska to make wind power a substantial part of the energy mix, with its three 1.5 megawatt turbines on Pillar Mountain. So getting good quality, low-cost sustainable power is really necessary for the long-term viability of the economy of Alaska.

Narrator: Upgrades at the Terror Lake hydroelectric plant, plus plans for three more turbines leave the KEA co-op confident they can hit 95% renewables by 2020. Though Kodiak uses diesel as a backup and during repairs, the wind turbines save the island 800,000 gallons of expensive, imported fuel each year. And this matters to the local business community. This morning, we're offloading pink salmon and red salmon, chum salmon and coho that came from the west side of Kodiak-- it keeps us busy, the plants work 24 hours a day, and it's a very, very big industry for Kodiak.

Narrator: This processing plant runs 100% on renewable energy, so Kodiak's wind power provides a clean, green marketing hook. The package says sustainable seafood, produced in Kodiak, Alaska, with wind-generated renewable energy. You got some folks in the community that are really concerned about price. You know, they just want the lowest cost power at their house or at their business. The wind does that. It's less than 50% of the cost of power versus diesel. Then you got folks in the town that are very just, environmentally concerned. And they are incredibly excited because it's a whole lot cleaner than diesel is. And then you've got the majority of folks who want both, which is great as well.

Narrator: Kodiak is a genuine island, surrounded by ocean, but vast areas of interior Alaska are also islands of habitation, small communities surrounded by open country and dense forests. Many have no road access, and the only way to transport heavy fuel is via rivers like the Yukon. Bear Ketzler is city manager of Tanana, a remote and mainly native Alaskan village at the confluence of the Yukon and Tanana Rivers. 90% of our bulk freight that comes in, comes by the barge.

Narrator: That includes diesel for the power plant and heating oil for homes. Diesel prices increased 83% between 2000 and 2005, and utility costs can sometimes be more than 1/3 of a household's income. The increase of energy costs, it jeopardizes everything. It jeopardizes our school, it really jeopardizes the ability for the city to function effectively.

Narrator: Communities like Tanana rely on the river for the fish protein that's a large part of a subsistence diet. And the river also provides a cheap and local source of energy. We have abundant resources of wood, biomass. Wood that floats down the river, in the spring and the fall time.

Narrator: Timber is increasingly replacing oil and diesel in Tanana's communal buildings, like the washeteria, a combination laundromat, public showers and water treatment plant. Right now, we don't even need oil, we're just running the whole place off this one wood boiler, which is just amazing.

Narrator: Using biomass and solar, the washeteria now uses only one quarter as much heating oil. Instead, the city pays residents to gather sustainable timber, keeping dollars in the local community. And using biomass at the washeteria has proven so cost effective that the city is planning to install boilers in other public buildings.

Bear: We're going to be one of the first communities on Yukon River that is installing a biomass systems on the school. In October of this year we're hoping to have that wood system on line, so instead of burning 15,000 gallons of oil throughout this winter, we're hoping to burn about 60 cords of wood. And keep that money local and create a little bit of an economy here.

Narrator: The bottom line for Tanana-- savings for the city. Biomass is cheaper, local, cleaner and more sustainable.

Bear: Even though we are a very rich state, very blessed to have the oil development that we do have, those days are diminishing. If we're going to make it in rural Alaska, we have to move towards renewable resources. I think we have, you know, less than 10 years to move in that area.

Narrator: Winter in Alaska presents extreme challenges. On this January day it was close to minus 50. Gwen Holdmann is an engineer with the University of Alaska's Center for Energy and Power. She and her husband also raise sled dogs and both are mushers who have raced in the Iditarod. Today's run takes her past the Alaska pipeline, which has transported more than 16 billion barrels of oil since it opened in 1977. Despite the fact that Alaska is rich in fossil fuels, Gwen knows they're limited and expensive. She wants to take advantage of every opportunity to tap renewable energy.

Gwen: We are an isolated part of the world, and we are still dependent very much on imports, and so becoming more self-reliant on energy is still a real goal here.

Narrator: Gwen was part of the team that built the first geothermal power plant in Alaska at Chena hot springs. Bernie Karl runs the Chena Resort and came up with the idea of creating an ice museum from the heat energy of the springs.

Narrator: Bernie is a real American pioneer-- a showman, an entrepreneur, a tinkerer and enthusiast for recycling old machinery because it's cheaper. He and Gwen successfully transformed the hot springs into a geothermal resource that now generates power from lower temperature water than anywhere else on earth. What you're looking at is something that's impossible. I went to the world's best manufacturer of geothermal equipment and they said, "can't be done, the word can't is not in my vocabulary." It wasn't obvious at first that it could be done because these are low, really moderate temperatures for geothermal. The water that we're talking about here is about the same as a good hot cup of coffee and generating power from that isn't a trivial thing.

Narrator: Normal conditions for mid-winter Chena are 3-4 feet of snow, subzero temperatures, and only a few hours of daylight. Heating and lighting costs were staggeringly high. But now the resort runs year-round with over 90% of its electricity coming from the hot springs. Bernie's latest impossible idea is to use geothermal power to make the resort self-sufficient in food even when it's minus 50 outside.

Narrator: For the past 6 years Chena has hosted a renewable energy fair. One keynote speaker was U.S. Senator Lisa Murkowski.

Lisa Murkowski: I'm a Republican. Republicans by definition are seemingly more conservative. What is more conservative than harnessing what is available and around us in a long-term sustainable way? We have more renewable opportunities here in Alaska than any other place in the world. We've got incredible river systems. We have 33,000 miles of coastline, the power of the tides, the power of the currents. We have biomass potential that is just beyond belief. As diverse and as big and remote and as costly as things are in Alaska, if we can demonstrate that it can be done here, think about the hope that it provides. They'll look at us and say, "Wow, if Alaska can do it, we can do this. We can take control of our energy future."