Old Faithful Geyser in Yellowstone is a famous tourist attraction, blasting hot water and steam more than 100 feet into the air on a sufficiently regular schedule to keep spectators happy. If you run the hot water through a turbine, you wouldn't get enough energy to supply the Old Faithful Lodge. But, that idea on a larger scale can provide valuable geothermal energy, which is being used in California, Iceland, New Zealand, Italy, and elsewhere. Most of our geothermal energy comes from anomalously "hot" places near volcanoes, and there aren't enough of those to power all of humanity. But, if we were to use "hot, dry rock", pumping waterway down, heating it, and bringing it out artificial geysers to drive turbines, an immense amount of energy is available.

Moving water carries power even if it isn't coming out of a geyser. We get reliable power from hydroelectric dams on rivers, and we can extract more energy from waves and currents. There isn't enough of either one to give us all of our energy, but in some places, they are greatly valuable, and we can develop new ways to make them more valuable—if you're building a breakwater to protect a city from the rising sea, why not install generators to convert the punishing power of storm waves into valuable electricity for the city?

The heat driving geothermal energy is mostly from radioactive decay in rocks. We have figured out how to generate more radioactive decay, where and when we want, in nuclear fission reactors, which are supplying much of our electricity in many countries. Nuclear energy could generate more electricity, too, although it also generates much debate among those who enjoy its reliable electricity, and those worried about contamination now or far into the future, and about the possible use of nuclear programs to generate material for bombs. 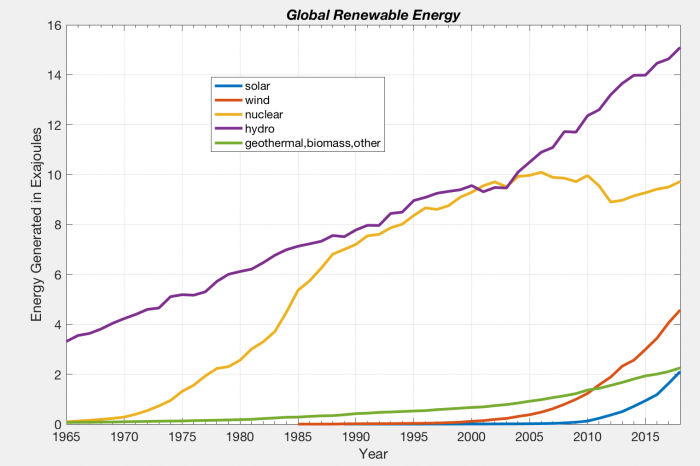 The history of global renewable energy production in Exajoules (EJ) of energy generated each year. Recall that at present, the world consumes about 600 EJ of energy each year.
Credit: David Bice, data from BP Statistical Review of Energy 2019

We see here that hydropower was already contributing a significant amount of energy in 1965 and has seen more or less steady growth since then. Nuclear energy emerged on the scene about 1970 and grew rapidly at first, but has since leveled off, while geothermal has been growing at a relatively slow pace. These three are all in contrast to wind and solar, which are characterized by exponential growth starting in just the past two decades.

How about costs? Most energy economists like to compare the energy costs from different sources using the "levelized cost" or "life-cycle costs" that we discussed earlier with wind and solar power. The table below provides a comparison of a wide range of energy sources.

As you can see, hydroelectric, geothermal, and nuclear are all more expensive than solar PV and wind, but they do have the advantage of being able to supply energy on demand without any kind of battery storage systems.

Let's go look at these interesting power providers — hydro, geothermal, and nuclear. We'll save some of the economic and ethical issues for later.

‹ Summary and Final Tasks up Goals and Objectives ›