Energy is Forever, but Useful Energy Is Not

Physicists have found that in our normal lives, energy is neither created nor destroyed — it is conserved. But as energy is used, it is changed from a concentrated, useful form to a spread-out, less-useful form, eventually becoming useless to us. To learn what Einstein has to say, read the Enrichment on the next page. But first, let's look at three examples.

Want to know more?
If you are worried about Einstein and atomic bombs and want to learn more about it, read the Enrichment called Einstein's Special Relativity Theory E=mc2!

Throw a bag of potato chips on the floor, and stomp on it. Keep stomping until all of the chips are reduced to dust. Then, on a really windy day, go to the top of a hill and throw the dust as high as you can.

There are still calories in that potato-chip dust. If you could somehow re-bag your chip dust, you could eat it and then go about your business, fueled by the energy stored in the potato chips. In the real world, bacteria are going to get that energy, because it would take you much more energy to gather up the potato-chip dust than you could ever get by eating it, even if you wanted to.

Energy itself is a little like your potato chips. Energy doesn’t disappear when you use it to do something you want, but the energy is changed to a less useful form until eventually, it is completely useless to you.  If yu eat the potato chips, your body will digest them and turn them into fuel that keeps your body going, which in part means generating heat to keep your body temperature at an average of 98.6°F, and then some of that heat is emitted from your body, traveling out in the form of infrared radiation, which is a form of energy.  So the energy stored in the chips has been put to use and has changed from chemical energy in the chips to thermal energy that your body emits.  And that thermal energy gets dispersed and is not really useful anymore, although it is conserved.

Click here for a video transcript of "Potato Chip".

DR. RICHARD ALLEY: These are potato chips-- crisps, in England. The chemicals in here are a concentrated source of energy that my body could store for later, or it could burn now to power me to do things that I think I need to do, like mow the lawn. And this is gasoline. The chemicals in here are a concentrated store of energy that I can use to power my lawnmower, to help me mow the lawn.

So if I were to take my chips, dump them on the driveway, and stomp on them with my big boots, the chemicals, the energy, would still be in there, but it just wouldn't be as useful to me. Especially if I took my lawnmower—

And I spread them all over everything.

So the stuff is there, the energy is there, but I've made it no longer useful. In exactly the same way, there's now less gasoline in the mower than there used to be. I have burned it. The stuff has gone into water vapor and CO2 in the air. And the energy, a little bit of it, made noise to annoy the neighbors. But eventually, that just heated up the surroundings. And a lot of went right into heat, so if you touched the wrong piece on this mower, you would burn yourself now.

So what we see in the real world, normal times, stuff and energy are not lost or made, but they're changed from one type to another. And with energy, we tend to change it from useful types to things that are not as useful, and eventually to heat that spreads out and does no good for us. A lot of the history of humanity has been finding concentrated sources of energy and trying to get useful things out of it as we change it into useless heat that spreads around the world. That may give you an idea that we'll come back to later.

Example 2: Gas in the Car

The chemical energy in a full gas tank in your car is enough for you to drive 400 miles or so. As you burn the gas, the muffler gets hot, and you warm the air and the tires and the road a little—you are turning the gasoline’s energy into heat. You could put a little thermoelectric device in your tailpipe and generate enough electricity to run your music player, or you could blow some of the hot air through the heater to keep you warm on a cold winter day—the heat can still be useful—but you’re using lots more energy to move the car than you’ll ever get back. After you stop the car and the muffler cools off, the heat energy has been spread out into the air and is being radiated away to space — if you had a thermal camera, you could take a picture of it. A satellite can even see the heat going to space, and make a map of how warm or cold the Earth is, so there is still some use in that energy...but not much. And eventually, the energy will spread uniformly across the universe and be completely useless.

While Dr. Alley was in New Zealand filming footage for Earth: The Operators' Manual, he took the opportunity to test another use of energy (his energy) by bungee jumping. He gained potential energy (the ability to fall down fast) by climbing up to the top of the jump. That is turned into kinetic energy (motion, the ability to collide with things) by jumping off. After the thrilling few seconds of the jump, all that energy ends up heating the surroundings a bit and is no longer useful. 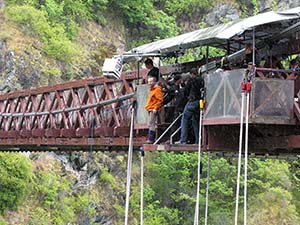 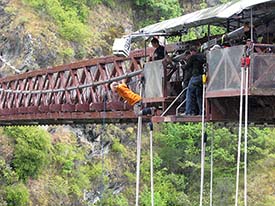 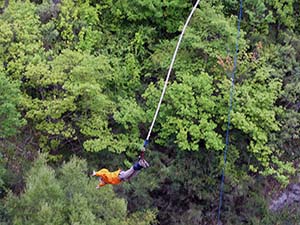 The key piece of knowledge to take away from these three examples of how energy is changed from a useful to a non-useful form is: if you want to keep doing things, you need new sources of concentrated energy. That’s what this course is about!

‹ Roadmap up Powering the Big Units ›