To understand the formation of oil and gas in the Appalachian Basin, we must understand the geologic history that occurred over the last 500 million years, give or take a couple of years! The Appalachian mountains that we see today were formed approximately 260 million years ago, though the oldest rocks exposed at the surface are over 500 million years old. The Appalachian mountains reveal elongate belts of folded and thrust-faulted marine sedimentary rocks deformed during plate collision. The origin of the Appalachians, nearly 480 million years ago, marks the first of several mountain building plate collisions that culminated in the construction of the supercontinent Pangea with the Appalachians near the center. During the early Paleozoic Era, approximately 500 million years ago, the future North American continent straddled the equator and was a passive plate margin, similar to the current East Coast of the US. Because the geographic location of this shallow marginal sea was in warm, tropical waters of the southern hemisphere much of the sediment was in the form of calcium carbonate (now limestone), either precipitated directly out of sea water or the skeletal remains of organisms. When the seas receded, terrestrial sedimentary deposits occurred and erosion.

During the middle Ordovician Period (about 440-480 million years ago), a change in plate motions set the stage for the first Paleozoic mountain building even in North America, known as the Taconic orogeny. The once quiet, Appalachian passive margin changed to a very active plate boundary when a neighboring oceanic plate, known as the Iapetus plate, collided with and began sinking beneath the North American plate. The early stages of this uplift resulted in the deposition of a black shale, which we know as the Utica Shale. With the birth of this subduction zone, Laurentia formed and the early Appalachians were born. Along the continental margin, volcanoes grew, coincident with the initiation of subduction. Thrust faulting uplifted and warped older sedimentary rock laid down on the passive margin. As mountains rose, erosion began to wear them down. Streams carried rock debris downslope to be deposited in nearby lowlands. By the time of the Early Silurian Period, the Taconic Mountains were lowered so much that less sediment arrived at the interior basin, and with continued subsidence, shallow-marine conditions returned. The sediment deposited in this interior seaway was primarily shale and limestone.

That shallow interior seaway was disrupted during the Devonian Period by another major tectonic disturbance along the margin of Laurentia, known as the Acadian Orogeny. As the proto-Atlantic continued to close and plates converged, the ancestral part of Europe (Baltica) collided with the northern part of Laurentia. With another high mountain system on its eastern border, another long period began when Pennsylvania received enormous quantities of river and delta sediment, known as the Catskill Delta. It was during the initial stage of the Acadian orogeny that the Marcellus shale was deposited in a relatively shallow sea, between 380-390 million years ago.

A third mountain-building event, known as the Allegheny Orogeny, occurred in early Permian time, about 270 million years ago as the result of a collision between Africa and the continent of Laurentia. Compressive stress accompanying this collision was so intense that great portions of the Laurentian crust and overlying sedimentary sequence were thrust westward toward the continent interior. Above the thrust planes, the sequence of sedimentary strata many kilometers thick, which had been deposited over hundreds of millions of years was warped and folded as the strata were forced toward the west.  The satellite imagery below shows the Appalachian Basin outline in green, with the various sub-basins in blue.  Note the presence of the Appalachian mountains in the center of the basin running from New York to Alabama. 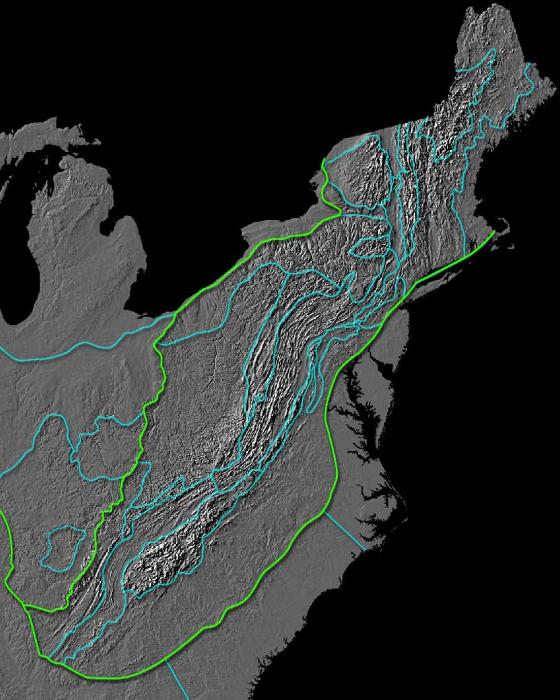 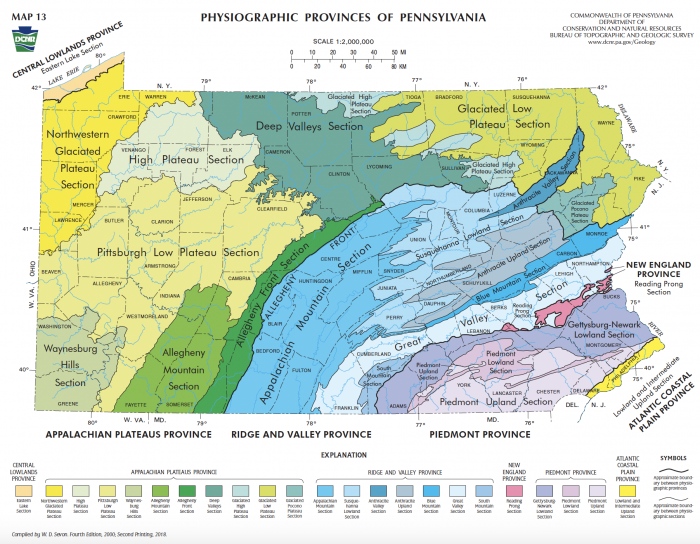 Pangea began to break up about 220 million years ago, in the Late Triassic to Early Mesozoic Era. As Pangea drifted apart a new passive tectonic margin was born and the forces that created the Appalachian Mountains were stilled. Weathering and erosion prevailed, and the mountains began to wear away. By the end of the Mesozoic Era, the Appalachian Mountains had been eroded to an almost flat plain. It was not until the region was uplifted during the Cenozoic Period that the distinctive topography of the present formed in Pennsylvania. Uplift rejuvenated the streams, which rapidly responded by cutting downward into the ancient bedrock. Some streams flowed along weak layers that define the folds and faults created many millions of years earlier. Other streams downcut so rapidly that they cut right across the resistant folded rocks of the mountain core, carving canyons across rock layers and geologic structures.  Today the rocks we see at the surface were one buried miles below the Earth's surface.  The geologic map of Pennsylvania shown below provides the age and types of rock that occur across the state. 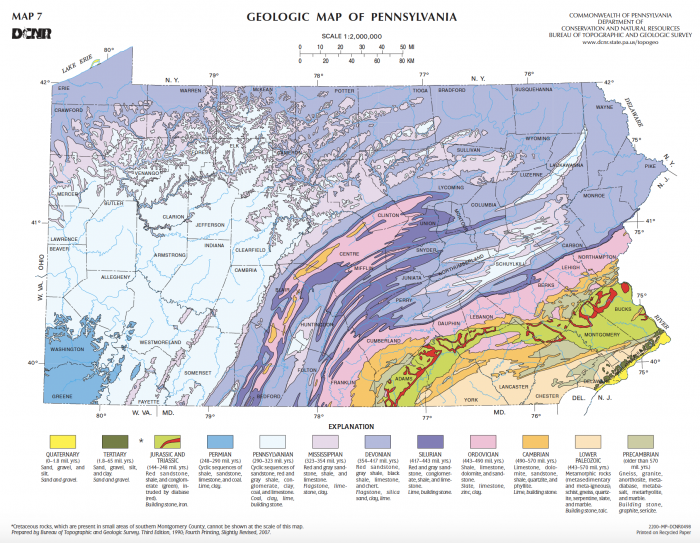