The illustration below portrays the global wind belts, three in each hemisphere. Note that the U.S. lies primarily in the Westerly Wind Belt with prevailing winds from the west. Each of these wind belts represents a "cell" that circulates air through the atmosphere from the surface to high altitudes and back again. The cells on either side of the Equator are called Hadley cells and give rise to the Trade Winds at Earth's surface. How do we explain this pattern of global winds and how does it influence precipitation? 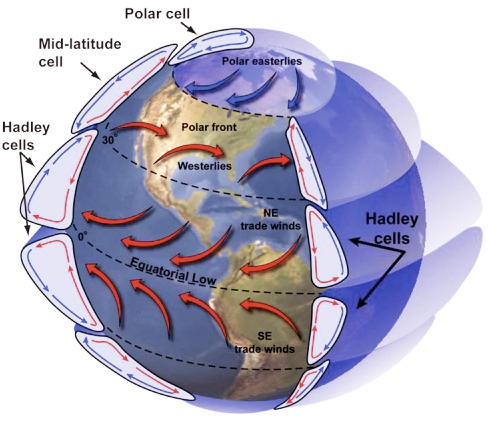 We'll start at Earth's equator, where solar radiation is the highest year around. Air near the equator is warmed and rises because it is less dense (mass/unit volume) than the air around it as shown in Figure 21 below.

Figure 21. Air near the equator is heated and rises as indicated by the red arrows.
Source: Mike Arthur and Demian Saffer

The rising air creates a circulation cell, called a Hadley Cell, in which the air rises and cools at high altitudes moves outward (towards the poles) and, eventually, descends back to the surface. The continual heating and rise of air at the equator create low pressure there, which causes air to move (wind) towards the equator to take the place of the air that rises. On the other hand, sinking air creates high pressure at the surface where it descends. A gradient of pressure (high to low) is formed that causes air to flow away from the high and towards the low pressure at the surface. 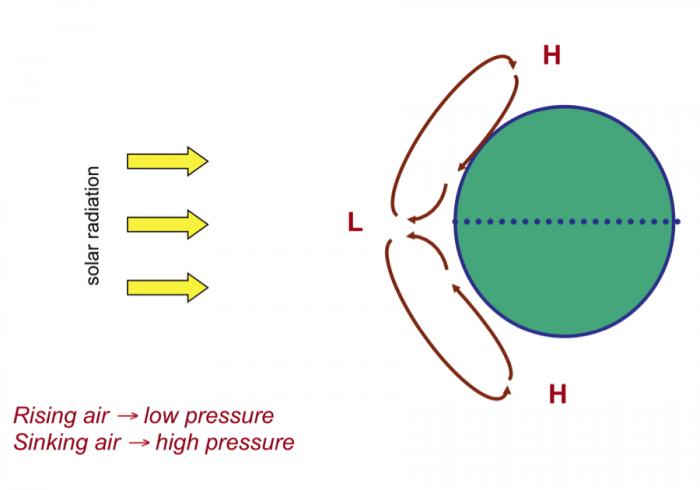 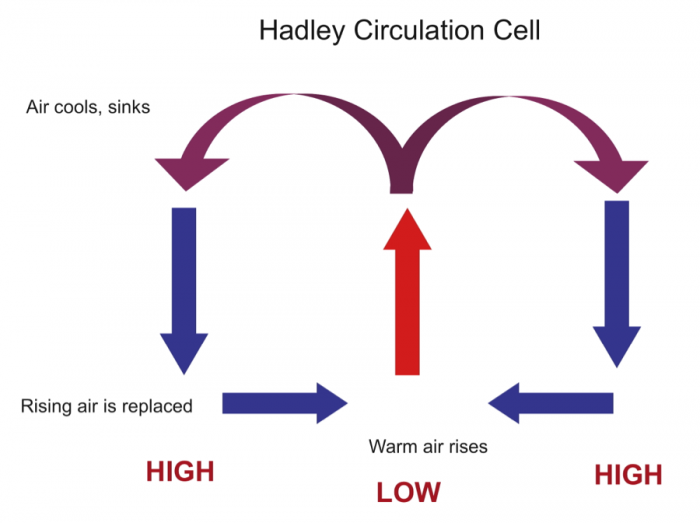 Figure 23. Hadley Circulation Cells cause a gradient of pressure shown in this figure.
Source: Mike Arthur and Demian Saffer

The Earth would have two large Hadley cells if it did not rotate. But, because it does rotate, the rotation of the Earth leads to the Coriolis effect. You should view the short video on this so-called "effect" or "force." (The Coriolis Effect). Without going into detail as to why rotation creates this apparent force, the Coriolis effect causes winds (and all moving objects) to be deflected:

The Coriolis effect causes winds to deflect as they travel within circulation cells and results in the two large hypothetical Hadley cells breaking into six smaller cells, which looks something like the diagram below (and the first figure in this series). 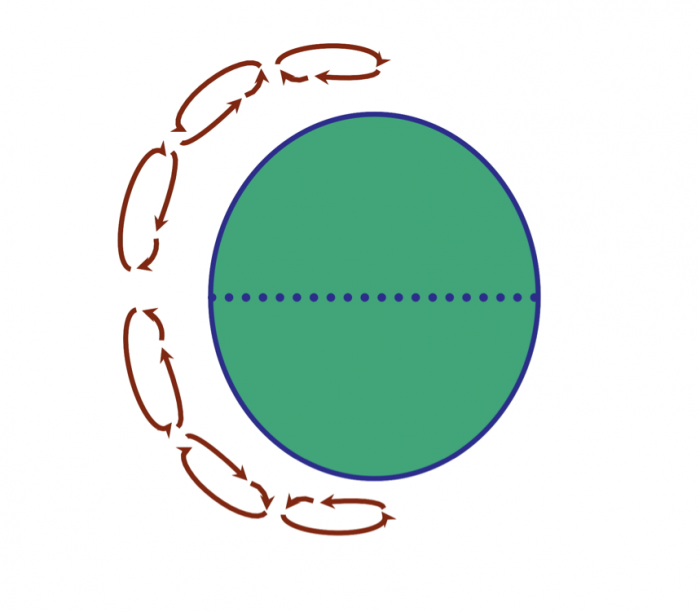 Figure 24. The rotation of the Earth is responsible for the Coriolis Effect which breaks the two large Hadley Cells into six smaller ones displayed as six red circles in this figure.
Source: Mike Arthur and Demian Saffer

Ok, so, we now have some idea about the origin of global wind systems that result from pressure gradients at Earth's surface. How does this produce precipitation, and where? Precipitation occurs where moisture-laden air rises, either by heating at the equator or by running up and over a more dense air mass. As the rising air cools its capacity to hold water decreases (relative humidity increases) and, at some point, saturation with respect to water vapor is reached. Then, condensation--clouds and rain! 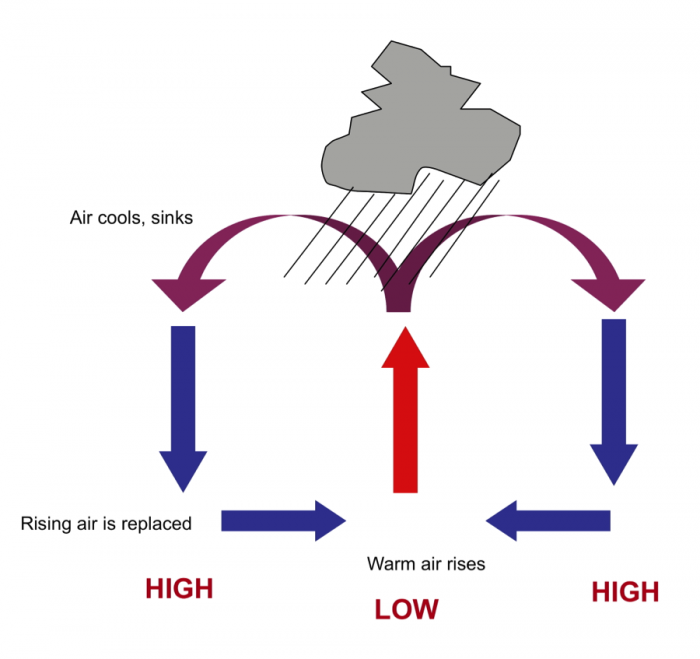 Figure 25. This figure demonstrates how the wind moves at the surface as it related to Hadley cell circulation.
Source: Mike Arthur and Demian Saffer

The diagrams above and below portray just the Hadley cell circulation, that is driven by heating in the equatorial region. On the surface, wind moves away from high pressure (High) and toward low pressure (Low). Convergence occurs near the equator (winds blow in towards one another) and Divergence occurs under the descending air that forms high-pressure belts. The final figure (Figure 26) shows all six cells diagrammatically, along with the pressure variations at the surface of the Earth and zones of typical wet and dry belts. Note particularly the dry belts near 30 degrees North and South. 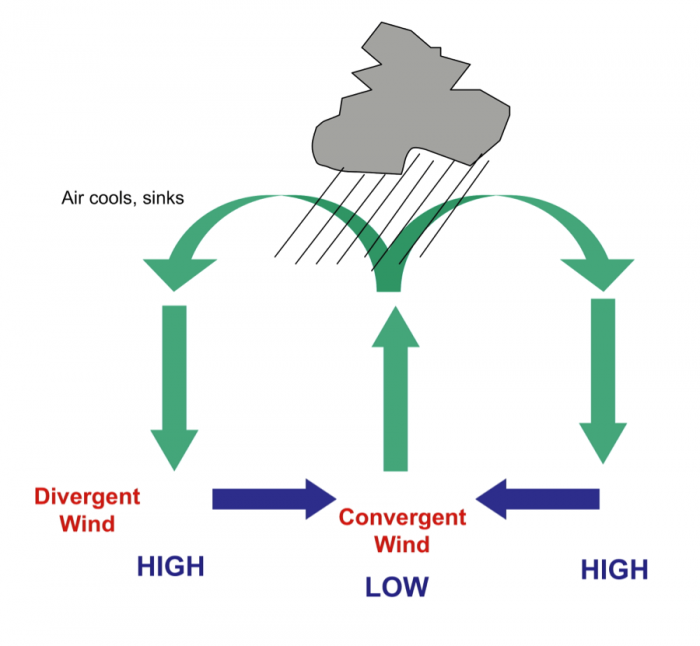 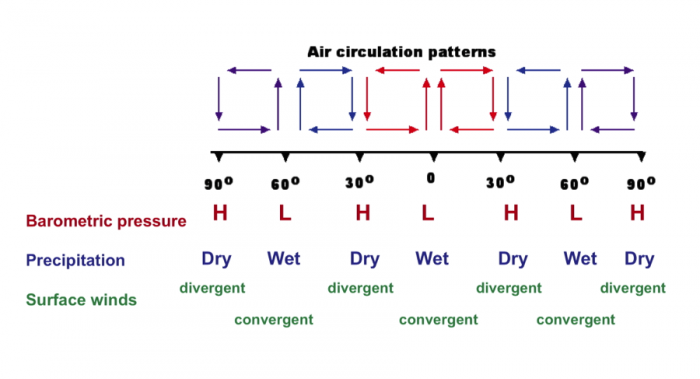 Figure 27. This figure shows all six cells diagrammatically, along with the pressure variations at the surface of the Earth and zones of typical wet and dry belts.
Click Here for Text Alternative of Figure 27.
Source: Mike Arthur and Demian Saffer
‹ Global Wind up Unit 2: Physical Hydrology ›
Earth 111: Water: Science and Society