When water is a liquid, the water molecules are packed relatively close together but can slide past each other and move around freely (as stated earlier, that makes it a liquid). Pure water has a density of 1.000 g/cm3 at 4˚ C. As the temperature increases or decreases from 4˚ C, the density of water decreases. In fact, if you measure the temperature of the deep water in large, temperate-latitude (e.g., the latitude of PA and NY) lakes that freeze over in the winter (such as the Great Lakes), you will find that the temperature is 4˚ C; that is because fresh water is at its maximum density at that temperature, and as surface waters cool off in the Fall and early Winter, the lakes overturn and fill up with 4˚ C water. 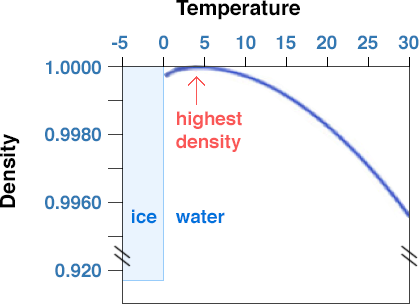 However, as dissolved solids are added to pure water to increase the salinity, the density increases. The density of average seawater with a salinity of 35 o/oo (35 g/kg) and at 4˚ C is 1.028 g/cm3 as compared to 1.000g/cm3 for pure water. As you add salts to seawater, you also change some other properties. Incidentally, increasing salinity increases the boiling point and decreases the freezing point. Normal seawater freezes at -2˚ C, 2˚ C colder than pure water. Increasing salinity also lowers the temperature of maximum density. This effect also helps explain why you are supposed to add salt to ice when making ice cream or to add salt to water when cooking spaghetti (although, in this case, the effect on boiling point is minor and the added salt is mainly for flavor).

When water freezes, however, bonds are formed that lock the molecules in place in a regular (hexagonal) pattern. For nearly every known chemical compound, the molecules are held closer together (bonded) in the solid state (e.g., in mineral form or ice) than in the liquid state. Water, however, is unique in that it bonds in such a way that the molecules are held farther apart in the solid form (ice) than in the liquid. Water expands when it freezes making it less dense than the water from which it freezes. In fact, its volume is a little over 9% greater (or density ca. 9% lower) than in the liquid state. For this reason, ice floats on the water (like an ice cube in a glass of water). This latter property is very important for organisms in the oceans and/or freshwater lakes. For example, fish in a pond survive the winter because ice forms on top of a pond (it floats) and effectively insulates (does not conduct heat from the pond to the atmosphere as efficiently) the rest of the pond below, preventing it from freezing from top to bottom (or bottom to top).

If water did not expand when freezing, then it would be denser than liquid water when it froze; therefore it would sink and fill lakes or the ocean from bottom to top. Once the oceans filled with ice, life there would not be possible. We are all aware that expansion of liquid water to ice exerts a tremendous force. Have you or a family member (you wouldn't admit to this would you?) ever left a full container of water with a tight-fitting lid (or even a can of soda?) in the freezer? In other words, 10 cups of water put into the freezer is going to turn into 11 cups of ice when it freezes (oops). The force of crystallization of ice is capable of bursting water pipes and causes expansions of cracks in rocks, thus accelerating the erosion of mountains!

A rough sketch of water molecules in ice crystal form is below. 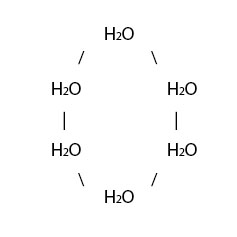