Rivers Come in Many Shapes and Sizes

Rivers Come in Many Shapes and Sizes

If you take a tour through any given landscape, via car or virtually through Google Earth, you are very likely to see a variety of different river types. At first glance, they may not appear so different (just a bunch of long tracks of flowing water), but if you look closer you will see that each river is, in a sense, unique, with some having a single channel while others may flow in multiple, interweaving channels. You’ll see that each river has a different pattern of sinuosity (i.e., the frequency and amplitude of ‘wiggles’), and each has their own variations of width and depth, differences in the material composing the channel bed and banks, and differences in the vegetation lining the channel. Figure 28 shows a few examples of different channel types.

The shape and size of a river depend on a multitude of factors that vary over time and space. A comprehensive discussion of these factors and the interactions between them is beyond the scope of this course, but it is useful to discuss how rivers are self-formed dynamic systems. To a large extent, water ‘designs’ the channels through which it flows and, in the process, acts as the primary factor sculpting the features that comprise a landscape. Understanding how river channels form and change over time is a very active research topic in the fields of hydrology and geomorphology. Recent breakthroughs in numerical modeling (including computational fluid dynamics models that can resolve the complex structures of turbulence and fluid flow as well as morphodynamic models that can simulate interactions between flow, sediment and vegetation) and increasing availability of high resolution topography data (aerial light detection and ranging (lidar) data, terrestrial lidar, and high resolution surveying and 3-D photography techniques) have greatly enhanced our ability to study the form and dynamics of river channels in great detail, over vast areas. In the broadest sense, river channel form is controlled by a) the amount of water (especially the size of ‘common’ floods that occur once every few years, as discussed below), b) the underlying geology (the type of rock and variability within the rock structure), c) the amount and type of sediment supplied to the channel (coarse material such as sand and gravel as well as fine material such as silt and clay), and d) the type of riparian vegetation along the channel. 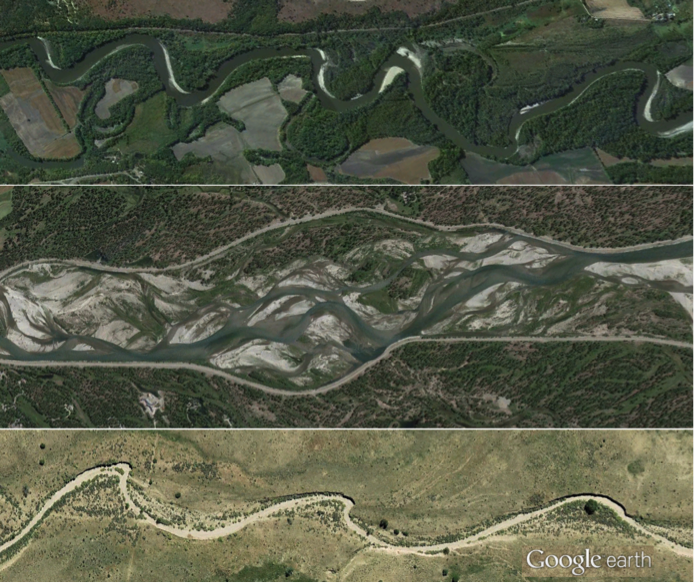 Click here for a transcript of the Why do Rivers Curve? video.

Compared to the white water streams that tumble down mountainsides, the meandering rivers of the plains may seem tame and lazy. But mountain streams are corralled by the steep-walled valleys they carve. Their courses are literally set in stone. Out on the open plains, those stony walls give way to soft soil, allowing rivers to shift their banks and set their own ever-changing courses to the sea, courses that almost never run straight, at least not for long. Because all it takes to turn a straight stretch of river into a bendy one is a little disturbance and a lot of time. And in nature, there's plenty of both.

Say for example then a muskrat burrows herself a den in one bank of a stream. Her tunnels make for a cozy home but they also weaken the bank, which eventually begins to crumble and slump into the stream. Water rushes into the newly formed hollow, sweeping away loose dirt and making the hollow even hollower, which lets the water rush a little faster and sweep away a little more dirt, and so on, and so on. As more of the streams flow is diverted into the deepening hole on one bank, and away from the other side of the channel, the flow there weakens and slows. And since slow-moving water can't carry the sand-sized particles that fast-moving water can, the dirt drops to the bottom and builds up to make the water there even shallower and slower, and then keeps accumulating until it becomes new land on the inside bank. Meanwhile, the fast-moving water near the outside bank sweeps out of the curve with enough momentum to carry it across the channel and slam it into the other side, where it starts to carve another curve, and then another, and then another, and then another. The wider the stream the longer it takes the slingshotting current to reach the other side and the greater the downstream distance to the next curve. In fact, measurements of meandering streams all over the world reveal a strikingly regular pattern. The length of one S-shaped meander tends to be about six times the width of the channel. So little tiny meandering streams tend to look just like miniature versions of their bigger relatives.

As long as nothing gets in the way of our rivers meandering its curves will continue to grow curvier and curvier until they loop around and bumble into themselves. When that happens, the rivers channel follows the straighter path downhill, leaving behind a crescent-shaped remnant called an oxbow lake, or a billabong, or un lago en herradura, or bras mort.  We have lots of names for these lakes, since they can occur pretty much anywhere liquid flows or used to. Which brings up an interesting question, what do the Martians call them?

This Minute Earth video is brought to you by you if you want to because we've started a new crowdfunding campaign on the website patreon.com to help remove banner ads and support Minute Earth going forward. And we'd be honored if you considered helping us out by going to patreon.com/minuteearth.