The Nile River and Aswan Dam

The Nile River and Aswan Dam

Large rivers are difficult to control. The Nile River, so important to Egypt's populace, is no exception. But since the late 1960s, the Nile River has been under the control of humans because of the construction of the Aswan High Dam. Part of the rationale for this dam was to manage the natural cycles of flood and drought to produce dependable water supplies for farming and other uses. The consequences of cyclic climate variations on a decadal scale were buffered by the large storage capacity of the Nile Valley behind the High Dam, which is nearly six trillion cubic feet (157 km3) of water! This is about four times the amount of water stored behind Hoover Dam (USA, Lake Mead) and Three Gorges Dam (China) (Chao et al., 2008). In addition, the Aswan High Dam initially produced a significant amount of electrical power (about 50%, now less than 15% of Egypt's needs) that allowed electrification of "rural" Egypt.

Figure 3 shows the narrow Nile River Valley slicing northward through the Egyptian desert. The narrow green band of the Nile River Valley represents farmland irrigated by waters of the Nile River. Prior to the completion of Aswan High Dam, the Nile River would flood its valley annually during the rainy season in its higher altitude headwaters (Ethiopia, Sudan, Kenya, Uganda), bringing nutrient-rich silt to fields and renewing fertility. In addition, a substantial volume of sediment was carried down the Nile River Channel to its large delta, building out the delta into the Mediterranean Sea, providing additional fertile land for farming. This no longer happens because the Aswan High Dam effectively (an unintended consequence) traps sediment carried from the highlands behind it. Now, the delta region, which subsides naturally as the result of compaction of sediment (newly deposited sediments have water contents of 70% or more that are reduced by compaction by overburden), is diminishing in size because rates of coastal erosion exceed supply of sediment. Currently, almost 1/3 of the Nile Delta’s land area sits within a meter of sea level. Subsidence rates vary across the delta, but in some areas, the land surface is sinking as fast as 1 cm/yr. Control of the Nile’s flow has also lead to water quality problems. Because once-regular floods no longer flush salts, sewage, fertilizers, and waste from the delta, surface waters are polluted and those living near the Mediterranean coast increasingly rely on groundwater to meet demand for drinking water and domestic use. Extraction of groundwater, coupled with land subsidence, has led to saltwater intrusion in the aquifer as far as 30 km inland.

There have been other unintended consequences of the Aswan High Dam including the spread of disease (Schistosomiasis), a decrease in water quality and increase in algal blooms resulting from fertilization of farm fields and irrigation runoff, flooding of historical sites, and displacement of people from the regions flooded by the reservoir. 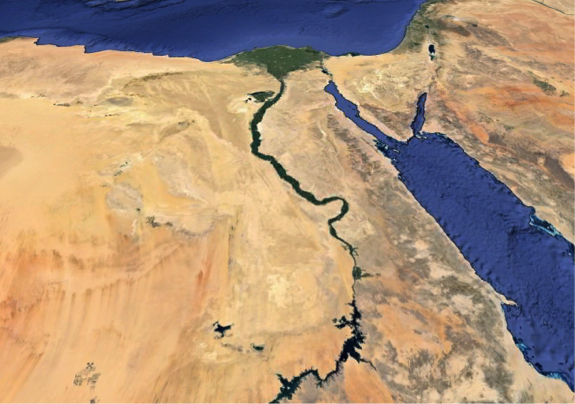 Figure 3. Egypt and the northern Red Sea (Google Earth image) and the Nile River Valley coursing through the desert region. Much of the green swath in the image is the fertile Nile valley with agriculture. The Aswan Dam and its reservoir (darker blue), however, can be seen in the lower part of the image.
Source: Google Earth 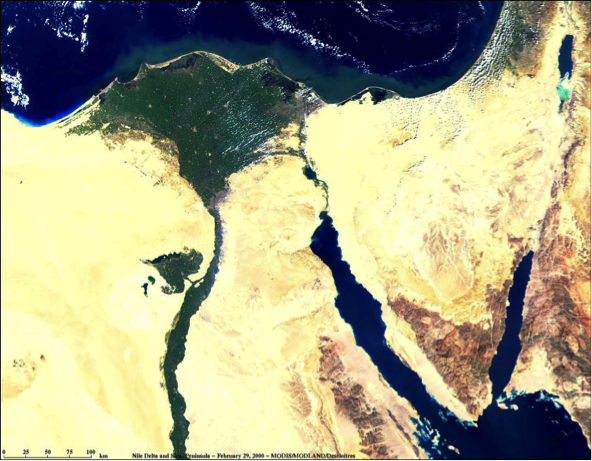 Figure 4. Satellite image showing the northern Nile River and Nile Delta on the southeastern margin of the Mediterranean Sea, as well as the Gulf of Suez, Gulf of Elat and northernmost Red Sea in the Egyptian Desert.
Source: NASA / MODIS
‹ Nutrient Supply to Floodplains up Sediment Trapping ›
Earth 111: Water: Science and Society