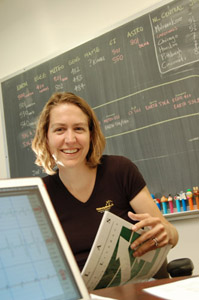 I'm Dr. Eliza Richardson and I wrote EARTH 501. I am also the lead faculty member for the Master of Education in Earth Sciences program. I am an associate professor of geosciences at Penn State's University Park campus and I am also a fellow of the Dutton Institute for e-Education, housed in Penn State's College of Earth and Mineral Sciences.

Like Bruce Springsteen, I was born in New Jersey. Unlike The Boss, however, I grew up in Blacksburg, VA. I also spent time living in the Caribbean and England because my parents were academics and sometimes traveled for their research. I received my undergraduate degree in 1996 from Princeton University where I majored Geology & Geophysics and minored in East Asian studies. I also manned the goal for Princeton's women's waterpolo team for four years. I went to graduate school at MIT and finished my Ph.D. in 2002. My doctoral research was in seismology; I managed several stints of field work at about 3 km below the ground in South Africa studying the earthquakes induced by gold mining. 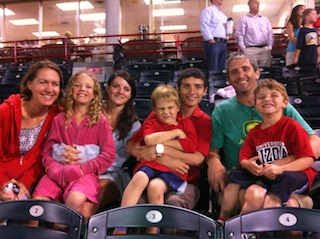 My current research involves the physics of earthquake sources. I am interested in how earthquakes begin, what makes them stop, and what happens along a fault while the earthquake is going on. When scientists can describe precisely these three parts of an earthquake, we'll be a lot closer to predicting them or at least mitigating the damage they cause.

During the academic years 2007-2008 and 2014-2015 I spent research sabbaticals with my husband, who is also a geophysicist at PSU, at the Institute for Geophysics and Volcanology in Rome, Italy. This was an incredible opportunity for us to collaborate on research projects with Italian colleagues. However, by far the most rewarding part of the experience was exploring Rome with our five kids. As of this writing one of them is a Penn State graduate, the next is an undergrad at the University of Arizona, and the other three are still at home.

Many people point to convenience for the students as a reason to offer a program of study in the online environment; as worthy as that is, I feel that this format is also convenient for me. Since I have a career and five kids, it is important that no matter who threw up in the night, who forgot their lunch, or who totaled the car (all of which have happened) I can still teach this course because we are not tied down to a specific time and place to meet and exchange ideas. I'm looking forward to the semester with you!

‹ Meet the Instructor up Overview ›
EARTH 501: Controversies in the Earth Sciences