Other Forms of Market Power

In this case, a buyer has market power and tries to maximize the consumer surplus, not the producer surplus. We essentially have a monopoly in reverse, and consumer surplus is maximized by the consumer's choice of quantity purchased. Instead of looking at the producer's marginal revenue function to define the monopoly quantity and price, we instead look at the consumer's "marginal expenditure," the amount of money he has to spend to obtain one more unit of a good, which changes with his purchase decision. Once again, we have a quantity that is less than the free-market equilibrium, but in this case a price that is lower than the free market equilibrium. This is described in the following diagram: 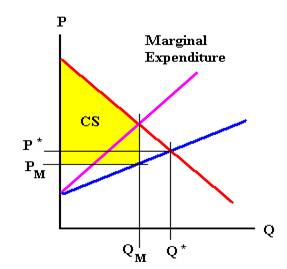 As you can see in Figure 5.4, the “Marginal Expenditure” line has the same intercept as the marginal cost line, but double the slope.

It is possible to have a situation where there is only one buyer and one seller. In this case, the quantity sold and the price will be a function of the negotiation between the trading partners.

This is the case where we have two sellers. Without getting into the mathematical details, we discover that the price is lower than the monopoly price, but higher than the competitive price. The quantity is also between the two. The best outcome for the two firms would be to share the monopoly profits between them; but each side has an incentive to cheat, which results in a different equilibrium. Incentives to cheat in a collusive environment are described in Chapter 11 of the text.

In this case, we are adding a few more sellers. As we add more sellers, the equilibrium moves along the demand curve towards the competitive equilibrium, as in the following diagram: 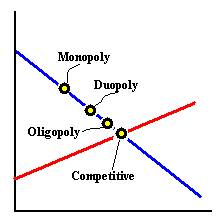 The obvious conclusion is that the more firms in a market, the closer we get to the competitive (wealth-maximizing) solution. This is why governments generally try to stop monopolies and break market power.

After this lesson and the associated readings, you should be able to:

‹ Profit Maximizing in a Monopoly up Price Discrimination ›
EBF 200: Introduction to Energy and Earth Sciences Economics