Profit Maximizing in a Monopoly

Profit (producer surplus) is the area below the equilibrium price and above the supply curve. The supply curve is the same thing as the Marginal Cost curve for the firm. 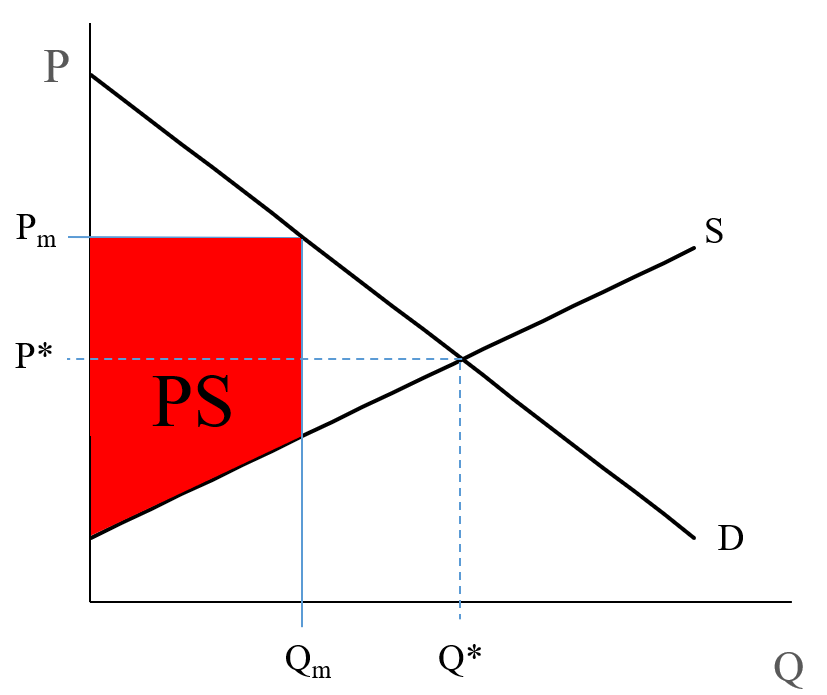 At which value of is the producer surplus (the profit, the red area) the largest?

Answer: it is maximized when supply = MC = MR (Marginal Revenue).

What is marginal revenue? Well, it is the amount of money a firm takes in from selling one more unit of the good. If the price is constant, then MR = price - selling one more unit means we collect one more times the price. But, in this case, since the monopolist faces a downward sloping demand curve, each additional unit he sells will have a lower price, and he will sell every unit at that lower price. As an example, using the demand curve in the previous numerical example, if the monopolist sets , then he sells 50 units at a price of 500, and has total revenue of 500 x 50 = 25,000. If he makes one more unit, he sells 51 units at a price of 492 (price is derived from the demand curve, 900-8*51=492), for a revenue of 25,095. His marginal revenue from making one more unit is 95, even though the price is 492.

So, we need to plot the marginal revenue curve.

It turns out that the marginal revenue curve is a line that has the same y-intercept as the demand curve, but has a slope that is twice as steep. So, for example, if our demand curve is given as , then 100 is the intercept and -1 is the slope (remember the equation of a line; . In our case, , which is another way of writing .

So, the marginal revenue curve has the same intercept, 100, but is twice as steep, with a slope of -2.

This is written as:

Here is a small aside, which is not obligatory and not something you will be quizzed on. If you know calculus, you will be able to understand the following calculus-based explanation of why the monopolist sets his quantity to be that where MR = MC, and how we derive .

We can write this as . In calculus, to find a maximum, we take the first derivative and set it to zero:

Profit is maximized when

If the demand curve is given by then

Generally, if a Demand curve is given as , then . 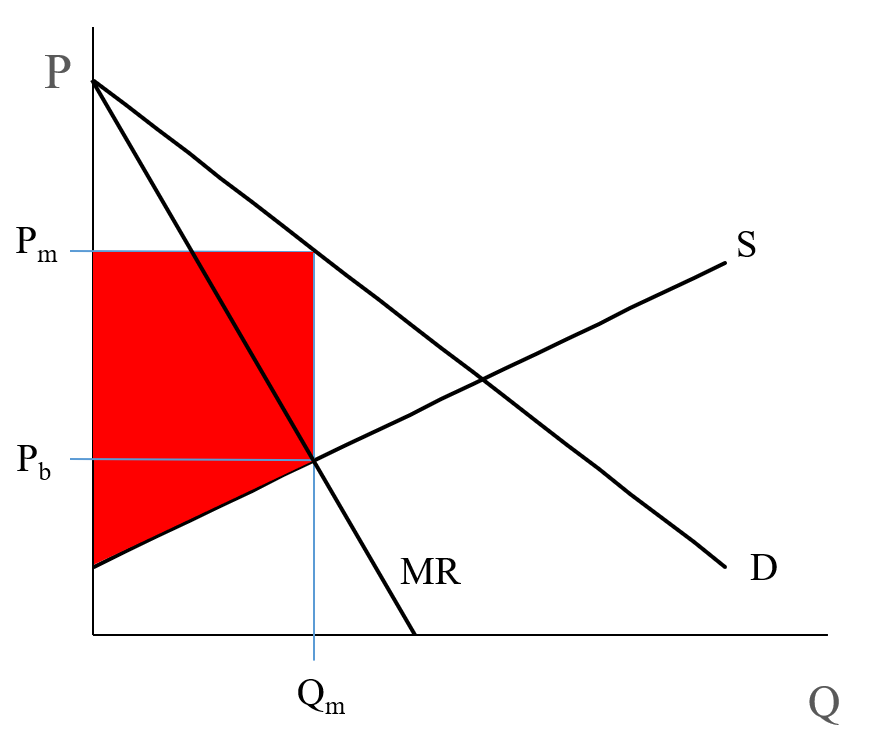 In Figure 5.3, the MR curve is shown in blue. To find the profit maximizing point, set to the amount where the MR and MC curves intersect. These will be sold at price . Any other quantity will give a smaller profit (the red area on the graph).

So, it is important to remember two things:

We say that in a monopoly, profit is maximized when , just like in a competitive market, when MR = Price = MC. You will remember that in a competitive market, the demand curve is flat. Its slope is zero. So, the derivative of this curve, which is the MR curve, also has a slope of zero (two times zero = zero). So the result that P(max) occurs when MR = MC is true not just in a monopoly, but all markets.

The demand curve is given as: .

The supply curve is given as: .

Calculate the dead-weight loss using this method and compare your answer with what we calculated. You should have similar results.

Try and work it through and see if you can get these answers.

After this lesson and the associated readings, you should be able to:

‹ Market Power and Monopoly up Other Forms of Market Power ›
EBF 200: Introduction to Energy and Earth Sciences Economics