We will now look at six products of combustion:

Carbon dioxide is one of the maor products of combustion with fossil fuels since carbon accounts for 60–90 percent of the mass of fuels that we burn.

China has emerged as the largest single emitter of energy-related CO2 emissions, surpassing the U.S. in  carbon dioxide emissions back in 2010.  Now, China emits more than 10 million metric tons while the U.S. hovers around 5 million metric tons. The chart below shows the trend in carbon dioxide emissions since 1980. For Asia and Oceania, and particularly for China and India, emissions can be seen to have increased significantly in the past two decades.

Click through each of the tabs to see how CO2 emissions have changed over time and around the world:

In 2019, 29 % of CO2 emissions were from transportation, 25 % were from electricity production, 23 % were from industry processes the remaining quarter are from commercial, residential and agricultural applications.

If a carbon-based fuel and its products are not completely oxidized (i.e. not burned completely), carbon monoxide will be formed. Carbon monoxide, or CO, is a colorless, odorless gas. The figure below shows the contribution of various sources to the emissions of CO:

Other sources of CO emissions include industrial processes (such as metals processing and chemical manufacturing), residential wood burning, as well as natural sources such as forest fires. Woodstoves, gas stoves, cigarette smoke, and unvented gas and kerosene space heaters are sources of CO indoors.

The highest levels of CO in the outside air typically occur during the colder months of the year, when inversion conditions are more frequent. An inversion is an atmospheric condition that occurs when the air pollutants are trapped near the ground beneath a layer of warm air.

Sulfur dioxide, or SO2, belongs to the family of sulfur oxide gases (SOx). These gases dissolve easily in water. Sulfur is prevalent in all raw materials, including crude oil, coal, and ores that contain common metals, such as aluminum, copper, zinc, lead, and iron.

SOx gases are formed when fuel containing sulfur, such as coal and oil, is burned, and when gasoline is extracted from oil, or metals are extracted from ore. SO2 dissolves in water vapor to form acid and interacts with other gases and particles in the air to form sulfates and other products that can be harmful to people and their environment.

Nitrogen oxides, or NOx, is the generic term for a group of highly reactive gases, all of which contain nitrogen and oxygen in varying amounts. Many of the nitrogen oxides are colorless and odorless.

Nitrogen oxides form when fuel is burned at high temperatures, as in a combustion process. The primary sources of NOx are motor vehicles, electric utilities, and other industrial, commercial, and residential sources that burn fuels as shown in the figure below.

Although many of the nitrogen oxides are colorless and odorless, one common pollutant, nitrogen dioxide (NO2) along with particles in the air can often be seen as a reddish-brown layer over many urban areas. 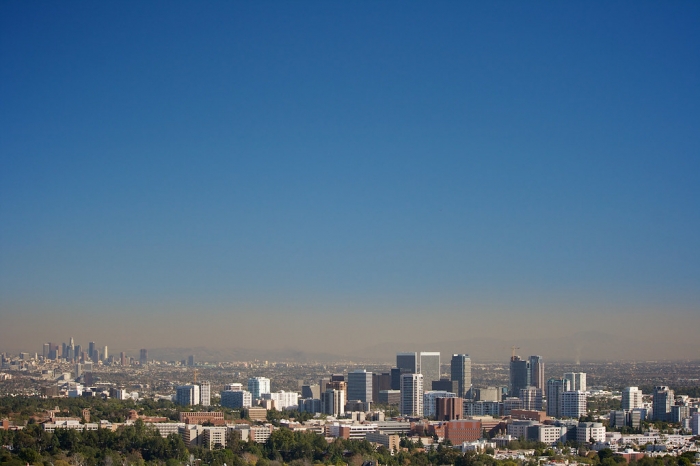 Smog over Los Angeles
Credit: Los Angeles from the Getty Center by Nick Thompson is licensed under CC BY-NC-SA 2.0

The major sources of lead emissions have historically been motor vehicles (such as cars and trucks) and industrial sources.

Due to the phase-out of leaded gasoline, metals processing is the major source of lead emissions to the air today. The highest levels of lead in air are generally found near lead smelters (devices that process lead ores). Other stationary sources are waste incinerators, utilities, and lead-acid battery manufacturers. 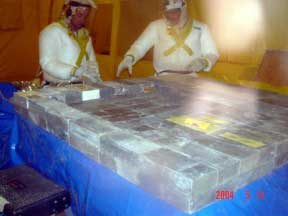 Lead is a metal found naturally in the environment as well as in manufactured products.

Lead is used in the manufacturing of many items, including glass, rubber, paint, batteries, insecticides, plumbing, and protective shielding for X-rays.

Particulate matter (PM) is the general term used to describe a mixture of solid particles and liquid droplets found in the air. Some particles are large enough to be seen as dust or dirt. Others are so small they can be detected only with an electron microscope.

Different sizes of Particles include:

Different Sources of Particles include: