These fluorescent bulbs that you are seeing, the long tubes, basically have two electrodes on the sides. And you pass electric current, and that creates an arc between the two electrodes, and that tube is filled with inert gasses. The inert gasses are argon or an argon plus krypton mixture. No air in there. Just an argon plus krypton mixture, and you spark it with a little bit of mercury in there. When you generate that arc between two electrodes, on the two sides of that tube, that arc excites these mercury atoms to a higher state. And then when they are coming back to the ground state, they have to release that excess energy that they absorbed, and they release it as non-visible UV light.

UV light is not visible. UV light is dangerous. Remember, UV light is what comes out when the mercury atoms are coming back to the ground state. But you know this tube is coated on the inside. The inside wall is coated with a different material, a special material called phosphorous. And those particles that are coated have a unique ability to absorb this UV light that is released when the mercury atoms are coming to the ground state. So that is absorbed, and that phosphorous coating will give out visible light. It absorbs UV light and gives out visible light. So without that phosphorous coating in there, a fluorescent bulb would not work. Fluorescence is absorbing UV light in the phosphorous and giving out visible light.

So, change of frequency, or change of energy status, is called fluorescence and a bulb that uses this principle is called a fluorescent bulb.

A fluorescent bulb consists of a glass tube with a phosphorus coating, a small amount of inert gas (usually argon or krypton), mercury, and a set of electrodes. Contact points on the outside of the tube carry electricity into the bulb.

Instructions: The animation below (1:04) shows a step-by-step depiction of how fluorescent lamps provide light. You may replay the video to review steps.

How a Fluorescent Light Bulb Works
Click here to open a text description.

How a Fluorescent Light Bulb Works

A fluorescent bulb consists of a glass tube with a phosphorous coating, a small amount of inert gas (usually argon or krypton), mercury, and a set of electrodes. Contact points on the outside of the tube carry electricity into the bulb.

When you turn on the light switch, electricity travels into the tube and to the electrodes, which produce electrons and allow a current to pass from one side of the tube to the other. Voltage between the electrodes causes electrons and charged argon molecules to move within the tube. The electrical currents also cause some of the liquid mercury to turn into gas.

As the moving electrons and charged argon molecules collide with the mercury atoms, they become excited. When they return to their normal state, they release energy in the form of ultraviolet photons. Because UV light has a very short wavelength that we cannot see, the phosphorous coating on the tubing converts the UV photons into visible light protons that we can see.

Fluorescent lamps are about 2 to 4 times as efficient as incandescent lamps at producing light at the wavelengths that are useful to humans. Thus, they run cooler for the same effective light output. The bulbs themselves also last a lot longer—10,000 to 20,000 hours versus 1,000 hours for a typical incandescent.

Fluorescent lights need ballasts (devices that control the electricity used by the unit) for starting and for circuit protection. Ballasts require energy, and for some type of ballasts, efficiency is only achieved if the fluorescent lamp is left on for long periods of time without frequent on-off cycles.

The image below shows a picture of a full-size fluorescent lamp fixture. The energy savings for existing fluorescent lighting can be increased by: 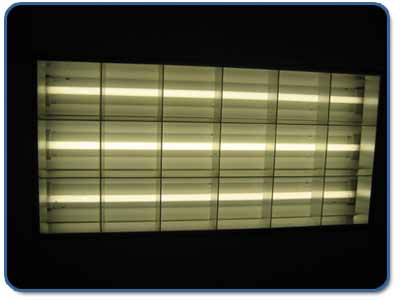 Cool white (4100 K) is the most common fluorescent lamp color. Neutral white (3500 K) is becoming popular for office and retail use.

Compact Fluorescent Lamps are miniaturized fluorescent lamps that usually have premium phosphors which often come packaged with integral or modular ballast, as shown in the image below. 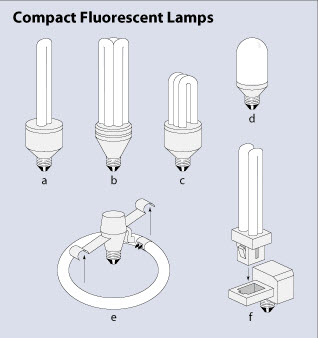 Types of compact fluorescent bulbs available on the market

Compact fluorescent lamps (CFLs) come in a variety of sizes and shapes including (a) twin-tube integral, (b and c) triple-tube integral, (d) integral model with casing that reduces glare, (e) modular circline and ballast, and (f) modular quad-tube and ballast. CFLs can be installed in regular incandescent fixtures, and they consume less than one-third as much electricity as incandescent lamps.

Compact Fluorescent Lamps have the following characteristics. They: 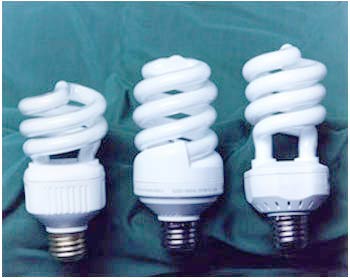