Figure 5.1 shows a graphic of the four methods of thermochemical conversion of biomass, with pyrolysis highlighted. We just went over combustion and gasification, and we’ll cover direct liquefaction later on in the semester.

There are differences for each of the thermal processes. For combustion, the material is in an oxygen-rich atmosphere, at a very high operating temperature, with heat as the targeted output. Gasification takes place in an oxygen-lean atmosphere, with a high operating temperature, and gaseous products being the main target (syngas production in most cases). Direct liquefaction (particularly hydrothermal processing) occurs in a non-oxidative atmosphere, where biomass is fed into a unit as aqueous slurry at lower temperatures, and bio-crude in liquid form is the product.

So, what is pyrolysis? There are several definitions depending on the source, but essentially it is a thermochemical process, conducted at 400-600°C in the absence of oxygen. The process produces gases, bio-oil, and a char, and as noted in Lesson 4, is one of the first steps in gasification or combustion. The composition of the primary products made will depend on the temperature, pressure, and heating rate of the process.

There are advantages, both economical and environmental, to doing pyrolysis. They are:

Pyrolysis was initially utilized in order to produce charcoal. In indigenous cultures in South America, the material was ignited and then covered with soil to reduce the oxygen available to the material – it left a high carbon material that could stabilize and enrich the soil to add nutrients ([Discussion of applications of pyrolysis], (n.d.), Retrieved from MagnumGroup.org). It has also been used as a lighter and less volatile source of heat for cooking (i.e., “charcoal” grills) in countries where electricity is not widely available and people use fuel such as this to cook with or heat their homes (Schobert, H.H., Energy and Society: An Introduction, 2002, Taylor & Francis: New York). Not only is there a solid product, such as charcoal, liquid products can also be produced depending on the starting material and conditions used. Historically, methanol was produced from pyrolysis of wood.

This process for pyrolysis can also be called torrefaction. Torrefaction is typically done at relatively low pyrolysis temperatures (200-300°C) in the absence of oxygen. The feed material is heated up slowly, at less than 50°C/min and is done over a period of hours to days – this way the volatiles are released and carbon maintains a rigid structure. In the first stage, water, which is a component that can inhibit the calorific value of a fuel, is lost. This is followed by a loss of CO, CO2, H2, and CH4, in low quantities. By doing this, approximately 70% of the mass is retained with 90% of the energy content. The solid material is hydrophobic (little attraction to water) and can be stored for a long period of time.

There are three types of pyrolysis: 1) conventional/slow pyrolysis, 2) fast pyrolysis, and 3) ultra-fast/flash pyrolysis. Table 5.1 and Figure 5.2 summarize how each method differs in temperature, residence time, heating rate, and products made.

Fast pyrolysis is a rapid thermal decomposition of carbonaceous materials in the absence of oxygen in moderate to high heating rates. It is the most common of the methods, both in research and in practical use. The major product is bio-oil. Pyrolysis is an endothermic process. Along with the information listed in Table 5.1, the feedstock must be dry; of smaller particles (< 3 mm); and typically done at atmospheric temperature with rapid quenching of the products. The yields of the products are: liquid condensates – 30-60%; gases (CO, H2, CH4, CO2, and light hydrocarbons) – 15-35%; and char – 10-15%.

Ultra-fast, or flash pyrolysis is an extremely rapid thermal decomposition pyrolysis, with a high heating rate. The main products are gases and bio-oil. Heating rates can vary from 100-10,000° C/s and residence times are short in duration. The yields of the products are: liquid condensate ~10-20%; gases – 60-80%; and char – 10-15%. 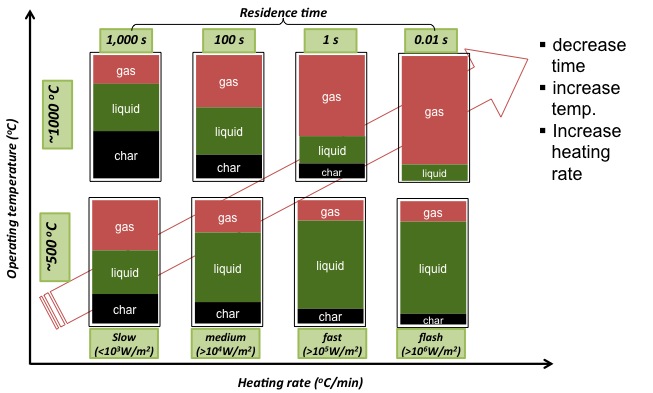 Crude bio-oils are different from petroleum crude oils. Both can be dark and tarry with an odor, but crude bio-oils are not miscible with petro-oils. Bio-oils have high water content (20-30%); their density is heavier than water (1.10-1.25 g/mL); and their heating value is ~5600-7700 Btu/lb (13-18 MJ/kg). Bio-oils have high oxygen content (35-50%), which causes high acidity (pH as low as ~2). Bio-oils are also viscous (20-1000 cp @ 40°C) and have high solid residues (up to 40%). These oils are also oxidatively unstable, so the oils can polymerize, agglomerate, or have oxidative reactions occurring in situ which lead to increased viscosity and volatility. The values in Table 5.2 compare the properties of bio-oil to a petroleum-based heavy fuel oil.

There are several components that are necessary for any pyrolysis unit, outside of the pyrolyzer itself. The units and how they are connected are shown in Figure 5.3. 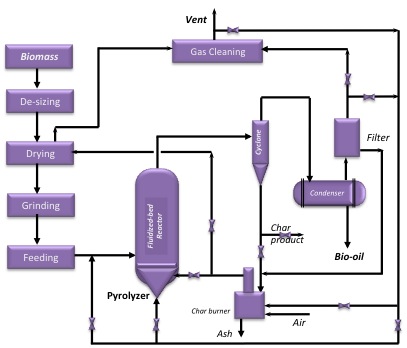 Figure 5.3: General components to a process for pyrolysis.
Credit: Dr. Caroline B. Clifford

The goal of the process is to produce bio-oil from the pyrolyzer. The bio-oil that’s generated has potential as a transportation fuel after upgrading and fractionation. Some can be used for making specialty chemicals as well, especially ring-structure compounds that could be used for adhesives. The gases that are produced contain combustible components, so the gases are used to generate heat. A bio-char is produced as well. A bio-char can be used as a soil amendment that improves the quality of the soil, sequesters carbon, or can even be used as a carbon material as a catalyst support or activated carbon. There will also be a mineral based material called ash once it’s been processed. Typically, the ash must be contained.

The next units to be considered are separation units. Char is solid, so it is typically separated using a cyclone or baghouse. It can be used as a catalyst for further decomposition into gases, because the mineral inherent in the char as well as the carbon can catalyze the gasification reactions. The liquids and gases must also be separated. Usually, the liquids and gases must be cooled in order to separate the condensable liquids from the non-condensable gases. The liquids are then fractionated and will most likely be treated further to improve the stability of the liquids. At times, the liquid portion may plug due to heavier components. The non-condensable gases need to be cleaned of any trace amounts of liquids, and can be reused if needed.

The next considerations are the heat sources for the unit. Hot flue gas is used to dry the feed. As the flue gas contains combustible gases, they can be partially combusted to provide heat. Any char that is left over is burned as a major supply of heat. And, biomass can be partially burned as another major source of heat.

Another important process consideration is the means of heat transfer. Much of it is indirect, through metal walls and tube and shell units. Direct heat transfer has to do with char and biomass burning. And in the fluidized bed unit, the carrier (most often sand) brings in the heat, as the carrier is heated externally and recycled to provide heat to the pyrolyzer.

So, what types of pyrolyzers are used? The more common types are fluidized-bed pyrolyzers. Figures 5.4a and 5.4b show schematics of two different types. The advantages of using fluid-beds are uniform temperature and good heat transfer; a high bio-oil yield of up to 75%; a medium level of complexity in construction and operation; and ease of scaling up. The disadvantages of fluid-beds are the requirement of small particle sizes; a large quantity of inert gases; and high operating costs. The unit shown in Figure 5.4b, the circulating fluid bed pyrolyzer, (CFB), has similar advantages, although medium sized particle sizes for feed are used. Disadvantages include a large quantity of heat carrier (i.e., sand); more complex operation, and high operating costs. 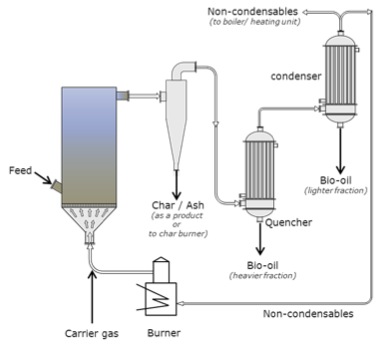 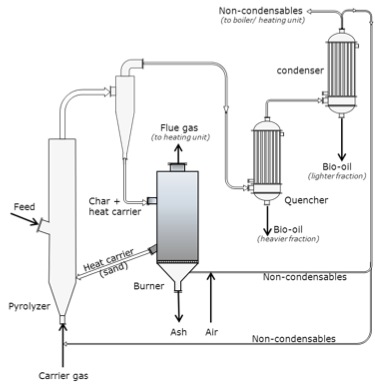 Two other types of pyrolyzers are the rotating cone (Figure 5.5a) and the Auger (Figure 5.5b) pyrolyzers. The rotating cone creates swirling movement of particles through a g-force. This type of pyrolyzer is compact, has relatively simple construction and operation, and has a low heat carrier/sand requirement. However, it has a limited capacity, requires feed to be fine particles, and is difficult to scale up. Auger pyrolyzers are also compact, simple in construction, and easy to operate; they function at a lower process temperature as well (400 °C). The disadvantages of Auger pyrolyzers include long residence times, lower bio-oil yields, high char yield, and limits in scaling up due to heat transfer limits. 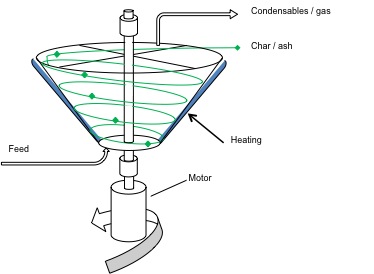 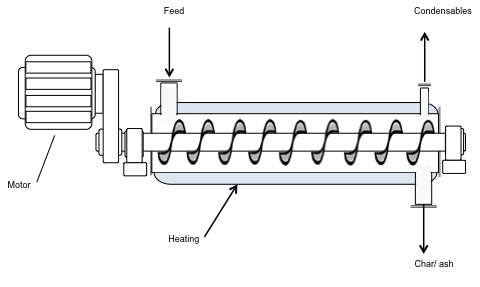 As noted earlier, bio-oil has issues and must be upgraded, which means essentially processed to remove the problems. These problems include high acid content (which is corrosive), high water content, and high instability both oxidatively and thermally (which can cause unwanted solids formation).

The oils must be treated physically and chemically. Physical treatments include the removal of char via filtration and emulsification of hydrocarbons for stability. Bio-oils are also fractionated, but not before chemical treatments are done. The chemical treatments include esterification (a reaction with alcohol to form esters – this will be covered in detail when discussing biodiesel production); catalytic de-oxygenation/hydrogenation to remove oxygen and double bonds; thermal cracking for more volatile components; physical extraction; and syngas production/gasification.

Catalytic de-oxygenation/hydrogenation takes place. A catalyst is used along with hydrogen gas; specialty catalysts are used, such as sulfides and oxides of nickel, cobalt, and molybdenum. Hydrogenation is commonly used in petroleum refining for removal of sulfur and nitrogen from crude oil and to hydrogenate the products where double bonds may have formed in processing. Catalytic processes are separate processes and use specific equipment to perform the upgrading. One problem can be that there may be components of bio-oil that may be toxic to catalysts. 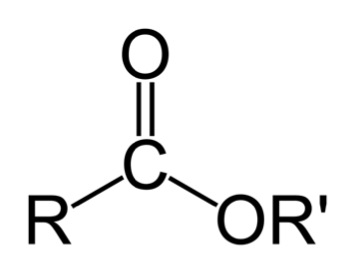 Bio-oil can also be thermally cracked and/or made into syngas through gasification. Please refer to Lesson 2 for the thermal cracking discussion and Lesson 4 for the gasification discussion. One other process that can be utilized is physical extraction, although extraction takes place due to the affinity of some of the compound to a particular fluid. One example is the extraction of phenols. Phenols can be extracted using a sodium solution such as sodium hydroxide in water; the phenolic compounds are attracted to the sodium solution, while the less oxygenated compounds will stay in the organic solution. Again, this will be discussed in more detail in later lessons. Figure 5.7 shows a schematic of a typical processing unit to upgrade bio-oil. 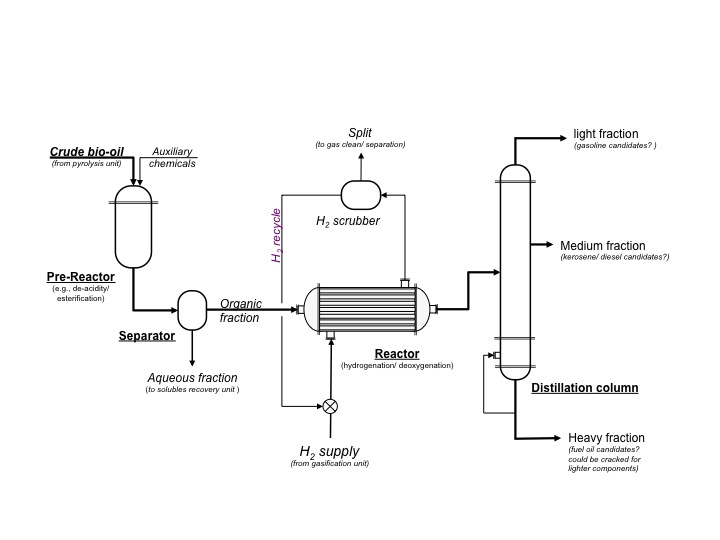 Current methods of generating bio-fuels are primarily from starch or grain, and starch hydrolysis is fairly straightforward. However, because the starch feedstocks are typically food based, the goal is to develop technologies to produce ethanol from cellulose; cellulose is obtained from lignocellulosic biomass sources and must be pretreated before breaking down into ethanol. Figure 5.8 is a schematic of the differences in processing for starch (current) and cellulose (emerging). Before we go any further, we will have a short tutorial on the various components of lignocellulosic biomass. 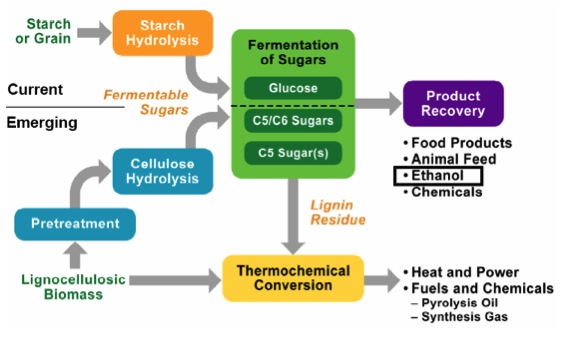