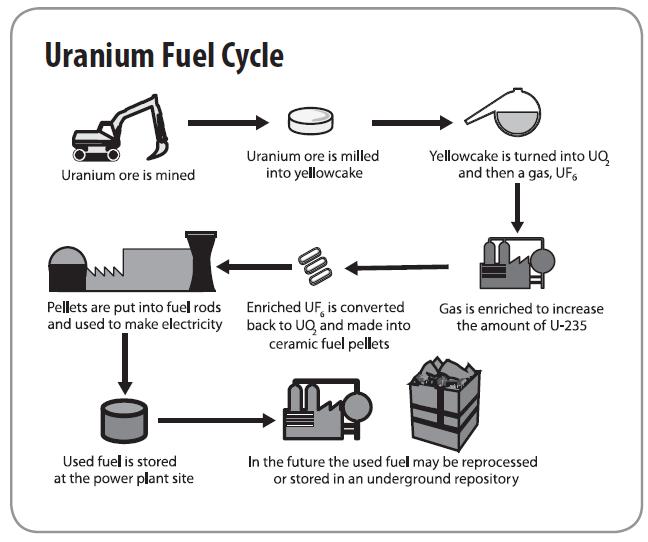 This is a flow chart from mining to conversion, enrichment, fuel fabrication, and storage.

The uranium fuel cycle includes all the steps of using uranium to generate electricity (fission), from mining to disposal/storage. These steps are described below.

Uranium ore is mined--much like coal--from underground mines or surface mines. In the USA, a ton (2,000 pounds) of uranium ore usually contains about 3 to 10 pounds of uranium. The process of separating the uranium from the ore is called milling. In this process, the ore is crushed and mixed with an acid (typically) that dissolves the uranium out of the ore. This solution is separated out and dried, leaving a powder called "yellowcake." In addition to yellowcake, uranium recovery operations generate waste products, called byproduct materials, that contain low levels of radioactivity.

The next step is to convert the yellowcake into uranium hexafluoride (UF6), a gas suitable for use in enrichment operations. In this process, the uranium (yellowcake) is combined with fluorine to create the UF6 gas. This gas is pressurized and cooled to a liquid, then poured into large cylinders, and then cooled for about 5 more days until it solidifies.

The conversion process involves strong chemicals to covert the yellowcake into soluble forms, leading to possible inhalation of uranium, and producing extremely corrosive chemicals that could cause fire and explosion hazards.

When uranium is mined, it is nearly all in the form of the isotope uranium-238. All uranium atoms have 92 protons in their nucleus (that's what uranium is!), but they may have different numbers of neutrons. When this happens, the atoms are called isotopes. Uranium-238 has 146 neutrons (92 protons + 146 neutrons = 238, the "atomic mass"). Uranium-235 has 143 neutrons. This form, uranium-235, is commonly used for energy production because the nucleus splits apart easily when it is hit (bombarded) by a neutron.

The purpose of the enriching process is to increase the proportion of U-235. There are three processes for doing this: gaseous diffusion, gas centrifuges, and laser separation. The only commercial enrichment facility currently operating in the USA is a gaseous diffusion plant in Paducah, Kentucky.

In a gaseous diffusion plant, safety risks include the chemical and radiological hazard of a UF6 release and the potential for mishandling the enriched uranium, which could create an inadvertent nuclear reaction (how's that for a phrase you never want to hear uttered?).

At a fuel fabrication plant, enriched uranium is prepared for use as fuel in a nuclear reactor. The uranium is heated back into a gas and then chemically processed into a powder that is processed into fuel pellets. A single uranium fuel pellet (about the size of a fingertip) contains as much energy as 17,000 cubic feet of natural gas, 1 short ton of coal, or 149 gallons of oil, according to the Nuclear Energy Institute. The pellets are sealed into metal tubes called fuel rods. Groups of rods are bundled together into fuel assemblies.

Use of the Fuel in Reactors

A nuclear reactor is the equipment used to initiate and sustain a controlled nuclear reaction. The fission process takes place in the reactor core. This core is surrounded by a reactor pressure vessel. To prevent radiation leaks, both the core and the vessel are housed in a containment building. It is an airtight structure, made of steel and concrete and several feet thick.

The fuel assemblies are placed in the core where the reaction takes place.

Just like burning coal, oil, or gas, the heat from the nuclear reaction is used to boil water and create steam. The steam turns a turbine generator to produce electricity and then the steam is condensed back into water, often in a structure at the power plant called a cooling tower.

Because waste products build up on fuel rods, making fission (the chain reaction), more difficult, operators of nuclear generation facilities have to replace the used fuel rods on a regular basis. To keep the plants in continuous operation, usually about one third of the fuel rods are replaced every 12 to 18 months.

Called used (spent) fuel, the rods taken out of the reactor contain radioactive waste products and unused fuel. There are two acceptable storage methods for spent fuel after it is removed from the reactor core:

Since 1982, a law has been in place requiring the Department of Energy to build and operate a deep underground facility (repository) for storing nuclear waste. But this has not yet happened. At one point, Yucca Mountain, Nevada was approved as a site for such a facility, but that application was withdrawn in 2010. Currently, nuclear power plants in the USA store all used fuel on site. The Yucca Mountain storage proposal was revived in the spring of 2019 by the Trump Administration, but has not been approved.

Reprocessing separates unused fuel from waste products in spent fuel rods, so that the fuel can be used again. Currently, reprocessing is more expensive than just making new fuel from uranium ore. Reprocessing is not currently done in the USA.

When spent fuel assemblies are removed from a reactor, the fission process has stopped, but the assemblies still generate significant amounts of radiation and heat. Because of the residual hazard, spent fuel must be shipped in containers or casks that shield and contain the radioactivity and dissipate the heat. Currently, most spent fuel shipments are between different reactors owned by the same utility to share storage space or to a research facility. When an underground waste repository is built, the number of these shipments by road and rail is expected to increase.