The concept of zero-emission vehicles is typically attributed to the transportation options that do not result in any harmful emissions during vehicle operation. Harmful emissions are defined as those known to have a negative impact on the environment or human health. They can include carbon dioxide, carbon monoxide, nitrogen and sulfur oxides, ozone, various hydrocarbons, volatile organic compounds (VOC), heavy metals in volatile forms (e.g., lead, mercury, etc.), and particulate matter.

Typical examples of zero-emission vehicles are electric (battery-powered) cars, electric trains, hydrogen-fueled vehicles, and human / animal powered transportation (e.g., bicycles, velomobiles, carriages, etc.). The battery technology for electric vehicles is based on charge/discharge cycles, meaning that the battery is charged beforehand using an electricity source and is discharged during vehicle operation. Because electricity production may involve some emissions, there is also a concept of well-to-wheel emissions, which includes not only operating emissions, but also those associated with the fuel source and other stages of the vehicle operating cycle. So, the "zero-emission" term is conditional in that sense.

The hydrogen-fueled vehicles are typically based on fuel cell technology, which imply electrochemical conversion of the fuel energy into electricity (as opposed to combustion). As a result, the only emissions of fuel cell operation are water and heat, which are not classified as harmful and therefore allow placing the fuel cell transport vehicles in the zero-emission category. The same as electric vehicles, fuel cell vehicles shift the emissions to the stage of fuel production. Thus, manufacturing of hydrogen gas via reforming of natural gas results in CO2 emissions, which must be taken into account in the life cycle assessment. 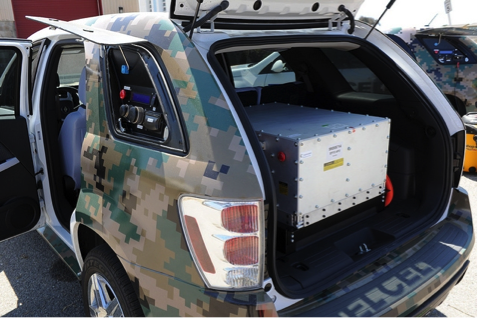 A military car with a fuel cell stack in the rear compartment.
Credit: Office of Naval Research via Flickr

However, there is a possibility of designing a sustainable zero-emission lifecycle for electric and hydrogen vehicles, if electricity for recharging the batteries is supplied from renewable sources such as wind, solar, hydro-power converters, and the hydrogen to power fuel cells is produced via electrolysis or other emission-free technologies.

The energy conversion technologies that support the electric vehicles rely heavily on special chemistry and materials necessary to facilitate the efficient charge transfer processes. Understanding the components and principle of those technologies is important to foresee potential barriers on the way to their wide implementation and commercialization. The following learning materials will provide you with the basic knowledge on how the battery and fuel cell systems work.

A schematic representation of a generic Li-ion battery is given in Figure 10.1. Roughly, Li-ion cell consists of three layers: electrode 1 (cathode) plate (usually lithium cobalt oxide), electrode 2 (anode) plate (usually carbon), and a separator. The electrodes inside the battery are submerged in an electrolyte, which provides for Li+ ion transfer between the anode and cathode. The electrolyte is typically a lithium salt in an organic solvent.

During the charging process, a DC current is used to withdraw Li+ ions from the cathode and to partially oxidize the cathode compound:

The released Li+ ions migrate through electrolyte towards the anode, where they become absorbed in the porous carbon structure:

At the same time, electrons travel through the external circuit (electrolyte is not electron conductive).

During the battery discharge, the reverse process takes place. Li+ ions spontaneously return to the cathode, where electrochemical reduction occurs.

Please watch this short video for an animated illustration of the Li-ion battery principle:

The lithium ion battery is the power source for modern electric vehicles. These days, everyone's heard of lithium ion batteries. But what makes them so special? First of all, each battery is made up of many smaller batteries called cells. Let's take a closer look at one to see how it works. The electrical current reaches the cells via conductive surfaces. In this case, aluminum on one side and copper on the other. And just as in every other battery, there's a positive and negative electrode called the cathode and the anode. The cathode, or positive electrode, is made of a very pure lithium metal oxide. The more uniform its chemical composition, the better the performance and the longer the battery life is. As you'd expect, the anode, or negative electrode, is located on the other side. It's made of graphite, a form of carbon with a layered structure. The battery is filled with a transport medium, the electrolyte, so that the lithium ions carrying the battery's charge can flow freely. This electrolyte must be extremely pure and as free of water as possible in order to ensure efficient charging and discharging. To prevent a short circuit, there's a layer placed between the two electrodes, the separator. To the tiny lithium ions, the separator's actually permeable. The experts call this property microporosity.

Let's take a look at what happens when a battery is charged. The positively charged lithium ions pass from the cathode through the separator into the layered graphite structure of the anode where they're stored. Now, the battery is charged. When the battery discharges, that is, when energy is removed from the cell, the lithium ions travel via the electrolyte from the anode through the separator back to the cathode. The motor converts the electrical energy into mechanical energy making the car go. The amount of energy available and how long the batteries last is closely related to the quality of the materials used. To sum it all up, higher quality, pure materials, along with customized formulations lead to longer battery life and better battery performance. PRESENTER 2: BASF, The Chemical Company.

If we compare the energy densities of the typical rechargeable Li-ion battery (~ 0.875 MJ/kg weight) and regular gasoline fuel (~46 MJ/kg), we can see that the gasoline beat battery electricity in potential to deliver power at least by a factor of 50. Thinking that typical engine is normally used at ~50% capacity, to match the capabilities of the internal combustion engine, the Li-ion battery has to be made at least 20 times more efficient, or the size of the on-board battery should be increased 20 times, which is a prohibitive option.

Limitations of the Li-ion batteries are rooted in the material properties.

For example, the LiCoO2 ⇔ Li1-xCoO2 conversion is only reversible with x<0.5, which limits the depth of the charge-discharge cycle. But, with a wider variety of materials available, research is underway to develop new generations of Li-ion batteries.

For example, take a look at Sigma Aldrich website, which lists multiple alternatives for cathode, anode, electrolyte, and solvents.

Fuel cell is similar to battery in the electrochemical principle of energy conversion, but different in operational design. Instead of storing the reagents and products of chemical reactions inside, like batteries do, fuel cells operate on continuous inflows/outflows of reagents and products. In that sense, they are not limited by discharge time and can generate electricity non-stop as long as fuel is supplied. Hydrogen is the best-proven fuel for fuel cells, although its storage and supply imposes some constraints on this technology.

A schematic representation of a hydrogen/oxygen fuel cell is given in Figure 10.2. The main components of the fuel cell include: membrane electrode assembly, which consists of a proton-exchange membrane and electrodes (anode and cathode) attached to the membrane on each side, gas diffusion layers, bipolar plates, and supporting structure. The fuel cell electrodes contain dispersed catalyst particles (usually platinum), which are necessary to promote electrochemical reaction.

A hydrogen-powered fuel cell combines hydrogen with oxygen in the electrochemical reaction to produce water and electricity. In case of direct contact of these gases, the reaction H2 + ½ O2 = H2O is very active and generate significant amount energy (under certain conditions – explosion). In a fuel cell, hydrogen is separated from oxygen by a proton conductive membrane, so, in order to react, it is forced to transform into ionic form by losing electrons:

As long as the supply of reagents, hydrogen and oxygen gases is maintained, the process continuously generates electric energy and water.

Please watch the animated illustration of this process in the following video:

Fuel cell cars, which run on electricity produced from compressed hydrogen, emit zero harmful emissions and could be the future of motoring. They can be just as fast, practical, and can travel as far as a conventional petrol or diesel engine car, but their technology is very different. And importantly, the only thing that comes out of the exhaust is water vapor. Rather than having a petrol or diesel tank like a conventional car, the fuel cell car has a tank that stores compressed hydrogen as a gas. Hydrogen is used as an energy carrier so that a fuel cell car can produce its own electricity onboard, rather than storing it in batteries. This compressed hydrogen is expanded and then fed into the fuel cell stack. The fuel cell stack is like a tiny electric power station. Inside it, the hydrogen combines with oxygen from the air to generate electricity and water as a byproduct. Water vapor is the fuel cell car's only emission. The electricity created inside the fuel cell stack is used to power the electric motor, which is in turn used to drive the car. The fuel cell stack is made up of hundreds of individual cells stacked together like a loaf of bread. In fact, each cell is like a sandwich with a Membrane Electrode Assembly, or MEA, between two separators, or bi-polar plates. The MEA is made up of a Proton Exchange Membrane, or PEM, which sits between hydrogen and oxygen electrode layers and gas diffusion layers. In each cell, hydrogen gas passes over the hydrogen electrode. Each hydrogen atom is converted into a hydrogen ion in a catalytic reaction, releasing an electron in the process. The hydrogen ions then pass through the electrolytic membrane, where they bond with oxygen ions straight from the atmosphere. The previously-emitted electrons from the hydrogen molecules arrive at the oxygen electrode via an external circuit. The released electrons create a flow of direct electrical current in the external circuit, and water is generated at the oxygen electrode as a byproduct. This water is drained from the system and exits the car as water vapor via the exhaust. Because the electricity is generated from hydrogen and oxygen, no carbon dioxide or other pollutants are emitted from the car. It's the ultimate in clean performance. Honda's FCX Clarity is the world's first production fuel cell car and is already on sale in the US and Japan.

The productivity of this simple process, i.e., how much electricity a single fuel cell can produce, is limited by a few factors. First is the proton conductivity of the membrane. The membrane consists of a special polymer (for example, sulfonated tetrafluoroethylene, Nafion®) which performs as an ionic conductor only under specially controlled temperature and humidity regime. This and other polymers produced for such applications are quite expensive. Second, the platinum (Pt) catalyst is necessary to provide sufficiently fast kinetics of the electrochemical reactions. Platinum is a noble metal, which has high cost and limited availability.

When it works, the fuel cell process is very efficient (80-90% efficiency) and can generate electricity pollution free and with no mechanical degradation to the cell components.

For quite a while, battery- and fuel-cell-operated cars were parallel track for future implementation of electric automotive engines, and the advancement of one or the other depended on breakthroughs in materials and device efficiency.

To overview the current status and trends in these technologies, please refer to the following reading.