In this section, we will discuss how solar energy can be stored in the form of hydrogen gas. Hydrogen (H2) is a common industrially used chemical and fuel, which can be obtained from water by electrolysis or by reforming of natural gas. Electrolysis is of special interest in the energy storage context, since it converts electric energy into something storable. The process of electrolysis involves passing electric current through water or another aqueous solution, which initiates the electrochemical reaction:

The basic idea is that the electricity generated by solar PV systems during daytime can be used to run electrolyzers to split water into hydrogen and oxygen gases. Hydrogen is collected and stored in one or another form. When energy is needed, hydrogen can be used for combustion or for electrochemical conversion (in a fuel cell) to recover energy as heat or electricity. Hydrogen provides a new form of energy economy, which complies with the present-day environmental requirements. For instance, hydrogen combustion does not result in any carbon emissions, and water and heat are the only products. Electrochemical utilization of hydrogen in fuel cells is thermodynamically efficient and environmentally benign. Fuel cells can be used for both stationary power generation and transportation. Unlike other forms of energy storage, hydrogen can be transported and used at a different location.

There are a few advantages of the hydrogen energy storage in solar plants:

There are different types of electrolysis that can be used for hydrogen generation. All of those methods use the available electricity to drive otherwise non-spontaneous electrochemical reaction. Electrochemical cell is required to realize electrolysis process. A typical electrochemical cell for electrolysis consists of two electrodes connected to electric circuit submerged in the working solution. The electrode compartments are separated from each other with a gas-impermeable membrane, which does not allow hydrogen and oxygen mix, while allowing conduction of ions.

Use the following reading material to learn the scientific background and engineering principles for different electrolyzers.

Due to high reactivity, hydrogen storage brings up some safety issues. At certain conditions, reaction between hydrogen and oxygen can lead to explosion (Figure 9.4), so storages for those gases should be separated, and leak detection is critical. 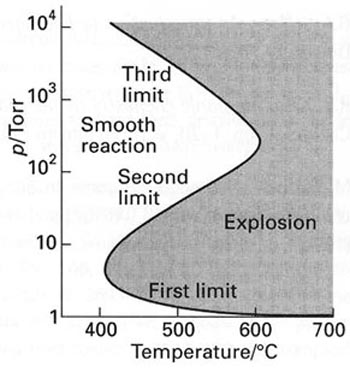 Figure 9.4. The character of the reaction of hydrogen with oxygen.
Credit: Shriver and Atkins, 1999

Solar hydrogen is attractive due to its carbon-free footprint, in contrast to any hydrocarbon fuels. Hydrogen has a very high energy density (142 MJ/kg), which is much higher than that of gasoline (~47 MJ/kg). This is due to its very light atomic mass. On the other side of the medal, hydrogen as a volatile gas must be contained in a compressed form, and the traditional gas cylinders used for storage and transportation of hydrogen have been a concern. Such cylinders, usually about 35 kg in weight contain only 700 g of hydrogen (at 200 bar of pressure), which is equivalent to only 2.85 liters of gasoline (Komoto et al., 2009).

The production of hydrogen via water electrolysis is most relevant to utility-scale PV systems. The efficiency of the electrolyzer is above 75% at optimized conditions. Even higher efficiencies are promised at elevated pressure, although in this case extra energy needs to be spent for isothermal compression. Much more than production, hydrogen "packaging", i.e., converting it to a convenient form for storage, can be much more costly and energy-expensive. These forms include (1) compressed hydrogen, (2) liquefied hydrogen, and (3) metal hydrides.

In option (1), compressed hydrogen is much more usable compared to that at atmospheric pressure due to much higher energy density (2.54 MJ/liter at 200 bar versus 0.0127 MJ/liter at 1 atm) (Komoto et al., 2009). Further compression to 800 bar brings its energy density to 10.1 MJ/liter - close to that of liquid hydrogen. However, multistage compression is estimated to take up to 8-12% of the total energy that hydrogen contains as fuel (referring to higher heating value), and mechanical and electrical losses can increase this value even further. Option (2), hydrogen liquefaction requires even more energy - 30 to 50 MJ/kg hydrogen converted. Option (3), metal hydrides are special compounds that can bind hydrogen by forming chemical bonds under certain temperature and pressure conditions and release hydrogen when temperature and pressure change. Simple physical pressurizing hydrogen into hydride form is possible but is not very attractive due to the large amount of metal hydride needed (50 kg per 1 kg H2 stored) (Bossel, 2006). Chemical binding of hydrogen in metal hydrides is much more promising.

Some examples of hydride compounds are CaH2, MgH2, LiH, NaAlH4, LiAlH4. Because metal-hydrogen bonds are quite strong, energy input is needed to release hydrogen from hydride. So, temperatures for hydrogen generation need to be raised to 120-200 oC. Nevertheless, the hydride storage is theoretically more efficient. For example, if we consider the reaction

we can see that by molar ratios, 42 g of CaH2 release 4 g of H2(gas), so it is roughly 4:1 ratio; at the same time, compressed storage in the cylinder provides storage of only 1 kg of hydrogen per 50 kg of storage tank, i.e., 50:1 ratio. Because of the obvious advantage of the metal hydride, substantial research effort is underway to improve this technology.