The large-scale energy storage (also called grid energy storage) is a stand-alone or hybrid system that allows storing large amounts electrical energy within an electrical power grid. Until recently, the dominant form of grid-scale energy storage has been pumped hydroelectricity, which accounts for over 95% of global installed storage capacity. Pumped hydro storage is rather old technology and has been around since the early 20th century, however it did not prove to be economically profitable or highly efficient. Other challenge you face in pumped hydro is the need of a certain kind of geological terrain to accommodate the proper size reservoir and availability of a large amount of water. We can add to that the environmental concerns and possible human impacts that are typically associated with the large hydro plants. It appears to be really hard to adopt this version of storage quickly in the newly constructed energy facilities.

Currently there is a pressing need for new generation storage devices, that would be efficient, cheap, and possibly modular in order to facilitate their allocation at any location with any required capacity. This niche is currently being filled by the battery array systems. Battery arrays are often stand-alone facilities, strategically located to support regional grid stability. 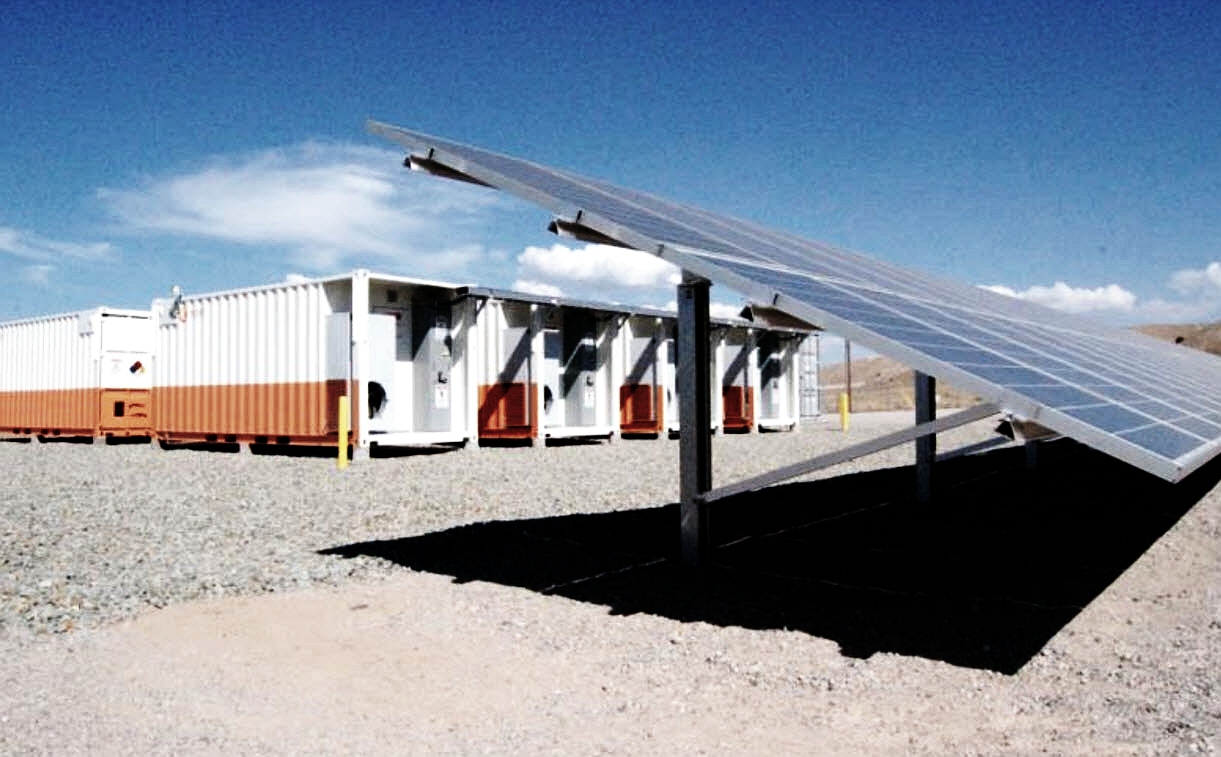 To be clear, the large battery energy storage systems (BESS) are not huge batteries as a matter of fact. Battery arrays are modulirized systems, in which individual battery cells (for example, Li-ion batteries) are stacked in series into higher voltage units. The same as solar cells are combined in panels, and pannels are organized in arrays, scaling-up battery systems follows the same principles of series and parallel connections in order to achieve the required power and capacity.

Some major companies that pursuing development and installation of large battery arrays are AES and Tesla. Follow the links below to learn about some case studies of battery array implementation:

One of the advantages we can see with battery solutions for grid storage is flexibility. For one, they can act as a reliable backup source. In the event of a power outage, battery systems can be turned on quickly to compensate. Data shown in the presentation on Chile grid system (second link for Angamos Storage Array) demonstrate very quick response of the arrays to the power outage and successful grid balancing.

In Australia, Hornsdale Power Reserve (built byTesla) helped restore power to the country’s grid in a fraction of a second after an unexpected failure at a power plant.

"the Hornsdale Power Reserve has smoothed out at least two major energy outages, responding even more quickly than the coal-fired backups that were supposed to provide emergency power.
Tesla's battery last week kicked in just 0.14 seconds after one of Australia's biggest plants, the Loy Yang facility in the neighboring state of Victoria, suffered a sudden, unexplained drop in output, according to the International Business Times. And the week before that, another failure at Loy Yang prompted the Hornsdale battery to respond in as little as four seconds — or less, according to some estimates — beating other plants to the punch. State officials have called the response time “a record,” according to local media." (Washington Post, 2017)

This table provides a list of other operating or commissioned projects, also including those based on other battery types (in addition to Li-ion):

Batteries can also store extra energy. If there's excess power during peak wind or solar production, a battery can store up all that energy for future use. The Hornsdale plant is able to provide full power to 30,000 home, although for a relatively short period of time. In case of long outages, it still needs to be supported by traditional power generation facilities. In this way, battery essentially serves as an end user of power as well as a power plant.

According to National Renewable Energy Laboratory (NREL Report, 2018), the cost of the stand-alone utility scale Li-ion battery storage system breaks down as follows: 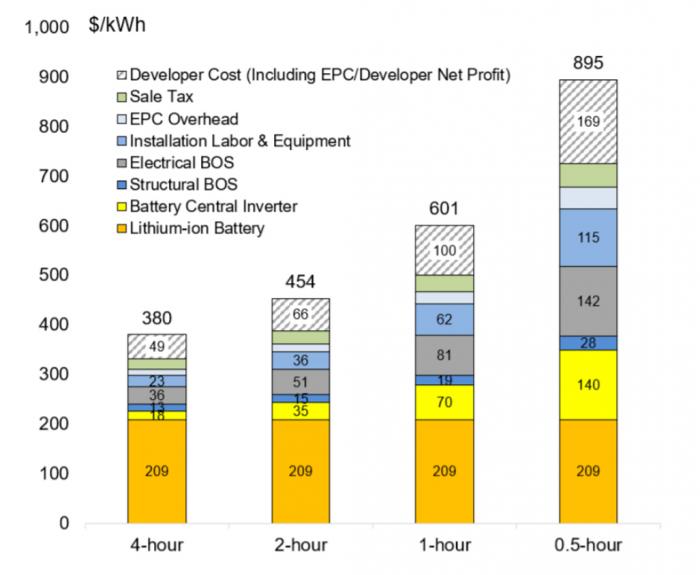 Interesting to note that while the battery cost per unit energy remains the same (with battery system being modular), the costs related to the balance of system, installation, and service decline with the storage duration.

Co-locating the PV and storage systems has multiple benefits. Co-location results in cost savings by reducing costs related to site preparation, land acquisition, permitting, interconnection, installation labor, hardware (via sharing of hardware such as switchgears, transformers, and controls), overhead, and profit. The cost of the co-located, DC-coupled system is 8% lower than the cost of the system with PV and storage sited separately, and the cost of the co-located, AC-coupled system is 7% lower. (NREL Report, 2018) 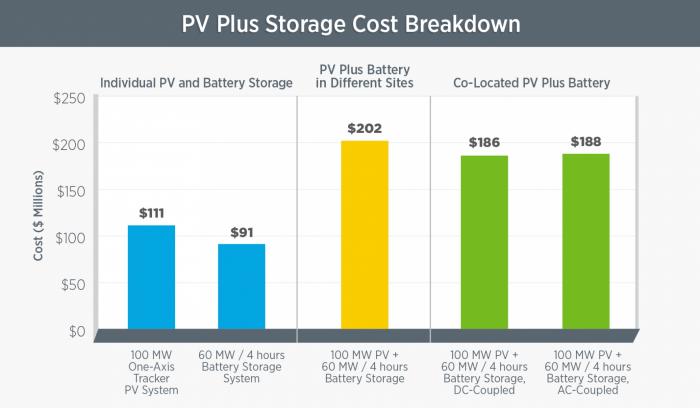 DC-coupling or AC-coupling of the energy source with storage can be used in different scenarios. DC-coupling is less expensive due to fewer conversions - 1% lower total cost than AC-coupling, which is the net result of cost differences between DC-coupling and AC-coupling in the categories of solar inverter, structural balance of system (BOS), electrical BOS, labor, EPC (engineering, procurement, and construction) and developer overhead, sales tax, contingency, and profit.

“According to NREL, there’s only one utility-scale PV system in the United States connected to storage, and it is Lawa'i project in Kauai, Hawaii. There are more systems that have storage co-located with a solar array, but those batteries can be charged by other sources of power on the grid. According to GTM Research’s “U.S. Energy Storage Monitor 2017 Year in Review,” more than 5,500 energy storage systems are installed in the U.S., in the residential and commercial sectors with over 95% connected to PV in the residential sector at the end of 2017, which amounts to about 4,700 systems. By the end of 2018, GTM estimates that solar-plus-storage will have accounted for about 4% of distributed PV and could reach 27% by 2023.” (Energy.gov, 2019)

Based on this assessment, it looks like distributed PV market is somewhat ahead of the utility solar when it comes to hybrid PV+storage systems. It may change quickly. Look at the South Korea’s example:

“South Korea represents a story of how government planning can drive massive energy storage market growth, with a new policy to allow storage-backed wind and solar projects to earn renewable energy certificates worth five times their capacity value driving a massive boom in 2018. From less than 10 megawatt-hours deployed in 2017, South Korea’s utility-scale and commercial-industrial behind-the-meter deployments boomed to 1,100 megawatt-hours in 2018, with nearly $400 million in energy storage investments and a pipeline of projects that’s already overshot its goal of 800 megawatt-hours by 2020.” (JTM, 2019)

But let us take a closer look at the Lawa'i Solar and Energy Storage plant on Kauai (HI), and try to find out what conditions made commission of this project a success.

This article gives you some basic information on the setting and parameters of the plant. But let us not stop there. The project was commissioned in the beginning of 2019. I ask you to research some more information on its current status and share your findings on the class discussion thread.