Two of the previous sources provide concise definitions of ethos (bold letters are my highlights):

Before we go any further, please consider the following. This has caused some confusion in past classes: Despite the definition above, is NOT primarily based on demonstrating you are an ethical person (though that may be part of it). It can most easily be summed up in one word: credibility. Keep that in mind, please.

Purdue provides the following examples of ways that you can establish ethos. I highlighted a few things that are most important to consider:

I know what you are probably thinking: This seems a bit complicated! There are a lot of rules! Actually, it's not terribly complicated. There are many ways to establish ethos (credibility) with your audience. Some of the most common are listed above, but there are others. What it boils down to is that whether you are speaking, writing, or trying to communicate in any way, anything you do to try to convince your audience that you are a credible, reliable source of information, it is ethos. Any time that someone is trying to establish credibility, they are using ethos.

Okay, now lets' get back to our original examples. Which of these sentences relies the most on ethos, and why do you think so?

If you said the second example, then give yourself a pat on the back. The language used in that narrative is a clear attempt to establish the author's credibility, in a few ways.

Remember, any way that a speaker or writer can establish credibility and believability is ethos. There are myriad ways of doing this, including using appropriate language, citing legitimate sources of information, dressing appropriately, speaking/writing with confidence, avoiding grammatical and/or spelling errors, and more.

So, now that we have ethos figured out, here's a little curveball: Appeals to ethos can change from situation to situation, even if it is the same speaker or writer trying to convey the same message. The video below from our friends at Purdue University does a really good job of explaining this and goes over ethos in general as well.

Please click on the link below for an explanation of ethos.

The narrators sum up ethos nicely by stating that: "In every rhetorical situation, ethos means a quality that makes the speaker believable." This "quality" can and does change all the time. Even if you don't have the credentials that render you credible on the topic, you should do your best to establish credibility by doing things like using reliable sources, proper language, and so forth. You've probably heard the truism that as a speaker or writer you need to "know your audience." Establishing ethos is one of the reasons why. You want your audience to believe you, and ethos can help make that happen. Politicians are particularly (or notoriously, depending on whom you ask) good at doing this. A few examples of this can be seen below.

Take a look at the photos of former President Obama below and think about the different ways that he is trying to establish credibility with his audience.

Notice the stark difference in physical appearance in the photos of Barack Obama above. What messages is he sending with regards to ethos? The left photo shows the classic "sleeves rolled up" look, which politicians use to speak to "regular folks," usually in public settings like fairs, construction sites (they'll also don a hard hat for this), local restaurants, and so on. The ethos-related messaging is something like: "Hey, I'm just a regular, hard-working guy like you. I understand your problems." But by wearing a dress shirt instead of, say, a polo shirt, an air of authority and professionalism is still presented.

The photo to the right presents a much different attempt at ethos. He is projecting an image of power and authority by wearing a suit and tie, being the only person in the shot, and sitting in a well-appointed office. Even his posture is different than the other photo. Note that both an American flag and flag with the Presidential Seal is in the background. Both project authority, among other things. Do you notice anything else in the background? Do the family pictures convey a message? This is a subtle reminder that he has a family with two young children, and thus is relatable (this is probably also an example of pathos).

Figure 5.3: Pervez Musharraf, former President of Pakistan. In the left image he is meeting with the U.S. Joint Chiefs of Staff Peter Pace (2006), and meeting with former U.S. President George W. Bush on the right (2006).
Credit: Both images are public domain: links: Wikimedia Commons and Wikipedia: Bush in Islamabad.

Again, the same person can project a different ethos with a simple change of outfit. On the left, former President Musharraf is sending a reminder that he is a military general and thus has credibility when discussing military matters. If he wore the military outfit while meeting with former President Bush, he would be conveying a different message than if he was wearing a suit, as he is in the right photo. He still projects authority but in a more business-like, professional manner.

Let's go over one more example, just to hammer the point home. Say you have a question about investing money. Which out of the two people below would you ask? 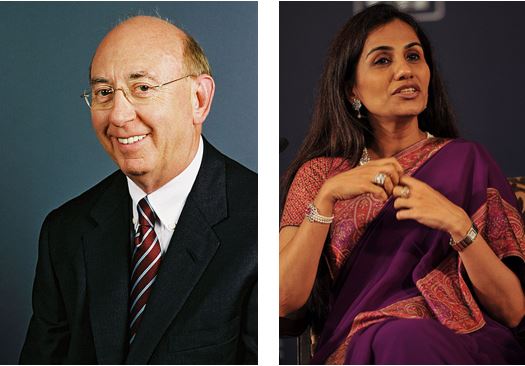 Which person do you think is better suited to answer your question? If you said the guy on the left, you were wrong! That is John Niederhuber, former Director of the National Cancer Institute. He may be a good investor, but I'd have to do some more research to figure that out. The woman to the right is Chanda Kochhar, CEO of India's largest private sector bank. She manages nearly $125 billion in assets, and is quite a good business person/investor, according to Forbes Magazine. If I only knew their respective positions, I would definitely ask Ms. Kochhar first.

Let's assume that you picked Mr. Niederhuber (like I would if I did not do any research). There are a couple of lessons to be learned here. First of all, looks can be deceiving. Closely related to that is, do your research when determining ethos. We live in a time where there is no shortage of access to information. Use the Internet to your advantage. The third is that we are all biased. Even if you did not assume that Mr. Niederhuber was more qualified to speak to financial issues, it is very likely that the idealized image of an investment banker is almost certainly male, and, at least in the U.S., white. There is nothing to be ashamed of for thinking this - if I'm being honest, when I picture, say, an investment banker, my immediate image is a young- to middle-aged white guy with a suit and tie, despite the fact that I in no way believe that this is the only type of person suitable for or capable of this career. It actually bothers me that this happens! But we are all products of our respective environments, and most of the investment bankers and Wall Street types we are used to seeing in the U.S. are white men. This is slowly changing but, historically, women have not been granted the same opportunities as men in certain sectors, business and investing being two of them. For example, of the top 500 companies in the U.S. (the S&P 500) in 2014, only 24 (yes, that's 24 out of 500) were headed by women. This is slowly changing, but not fast enough to alter the perception of what a powerful business person "looks like."

Remember that one of the goals of this course is for you to be able to critically analyze claims being made. One important aspect of doing that is to recognize preconceived notions and biases and to try to look past them. Try to step outside of your own experience and viewpoint, and as much as possible, investigate ethos from an objective perspective.

It can be easy to view ethos as a way to "trick" audiences into being persuaded by someone. This can certainly happen, and often does. This is a common problem with politicians, as they never want to appear not credible. But it is important for you to know that ethos can be legitimately established. Knowing as much as possible about the source of information is an important aspect of determining credibility. For example, if I want to know about drought conditions across the U.S. I refer to the National Oceanic and Atmospheric Administration (NOAA), since I know that monitoring water conditions is one of their focuses, and that they are tasked with presenting an unbiased, scientific perspective. In short, I know that they are credible.

If the Administrator of NOAA was to give a speech or write an article, (s)he would be remiss if (s)he did not let the audience know her/his position. (S)he has credibility, but still may need to establish ethos. Doing this does not mean that (s)he is trying "trick" anyone, but it does mean that (s)he is trying to strengthen her/his argument, which if you recall is the purpose of rhetoric. Ethos is only established if the audience thinks that you and/or your argument, is credible, and that can be done without being dishonest or "tricky" in any way. 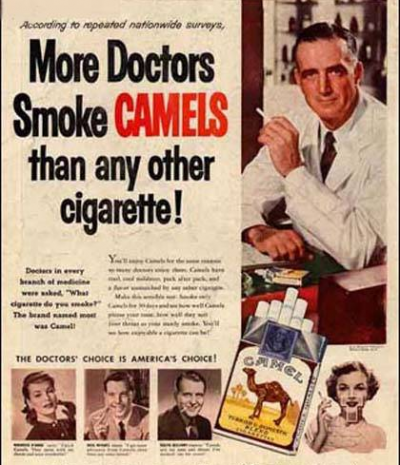 Figure 5.5: Yes, this is a real advertisement! According to the National Institutes of Health, in the early 20th century, tobacco companies embarked on a campaign using doctors to promote smoking. These ads appeared in major national magazines. There is a clear use of ethos in these ads.
Image Credit: Flickr, Lau Ardelean, CC BY-NC-SA-2.0

There are a lot of ways to establish ethos, and they can change from audience to audience. The adage "know your audience" is an essential consideration.

Remember that ethos (despite the name) is not expressly an appeal to the audience's ethics, but to try and establish your credibility with the audience.

The most common ways to establish ethos are as follows (in no particular order):

Describe one specific example of something that could establish OR compromise ethos, depending on the audience.