Energy return on energy invested (EROI) is a fairly straightforward concept. The following summaries key concepts and terms regarding EROI:

The images below provide a snapshot of sample EROIs of various fuels provided in a peer-reviewed article by Hall, Lambert, and Balogh called "EROI for different fuels and the implications for society." 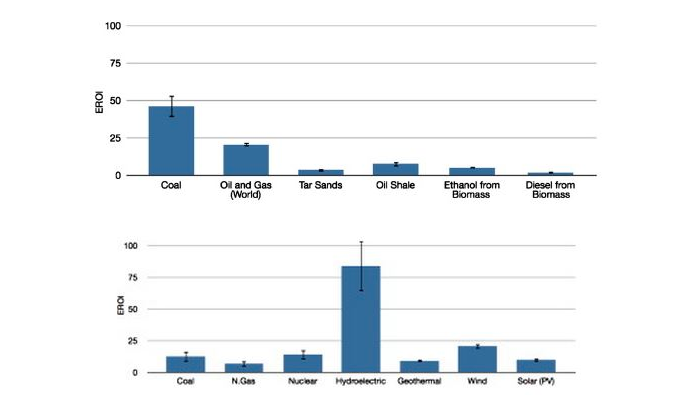 Figure 2.5: The EROI values of various energy sources, aggregated from various published studies. All else being equal, higher EROI is better.

Click for a text description
The EROI values of various energy sources aggregated from various published studies. All else being equal, higher EROI is better.
Image Credit: Hall, Lamber, and Balogh, CC BY-NC-ND 3.0

Why is EROI important? One of the main reasons is that EROI is more indicative of the true net energy benefit of various fuels than the end use. It takes about the energy from 1 barrel of oil to extract 20 actual barrels of "traditional" oil (it has an EROI of about 20:1), but the same amount of energy, when used to extract tar sands oil, results in only about 4 actual barrels. In other words, EROI indicates that you get about 5 times the amount of energy from traditional oil than from tar sand oil given the same amount of input. A very interesting finding in the Hall, Lambert, and Balogh article is that oil discovery in the U.S. has decreased from 1000:1 in 1919 to only 5:1 in the 2010s, meaning we get 100 times less energy now than 90 years ago! (Essentially, we have extracted most of the "easy to get" oil and do things like deep sea drilling now.) Getting ethanol from corn (recall from Lesson 1 that this is the U.S.'s primary source of biofuel) can require almost as much energy in as energy you get out, depending on how it is grown and processed.

EROI can help policymakers and others decide which energy source is a more efficient use of energy resources. In the context of this course, it is a particularly important consideration for non-renewable resources, because it indicates the net energy benefit of the sources.

One extremely important final thing to note: EROI only describes energy use. It says nothing about the other important impacts and factors. For example:

In short, EROI is only one consideration to be made.

If you listen to the news, pay attention to politics, or read about business activity (no matter where you live in the world), you know that it is taken as almost a given that economic growth is good, and should be pursued ad infinitum. But you may recall from EM SC 240N that not only is growth not always good, but permanent economic growth is impossible on a finite planet unless it can be done in such a way that the total amount of natural resources on Earth remains the same year after year. In other words, as stated by Herman Daly:

"An economy in sustainable development...stops at a scale at which the remaining ecosystem...can continue to function and renew itself year after year" (Herman Daly, "Sustainable Growth, an Impossibility Theorem," p. 45)

This is one of the main points of Herman Daly's seminal article "Sustainable Growth, an Impossibility Theorem." Feel free to read through this reading, which is posted in Canvas. The following are some other important points from the article:

All of the above summarizes the concept of the steady state economy.

If that weren't the case, then temperatures will be going up. The import from outer space of materials and the export to outer space of materials are roughly equal - I mean both negligible, and usually involuntary in any case. So, the Earth as a whole, in its behavior mode is a steady state. So as the economy becomes a larger and larger subsystem of the Earth, then more and more it has to conform to the behavior mode of the whole of which it is an ever-larger part.

So in the limit, I mean the economy takes over the whole Earth, well then it’s got to be a steady state because that's the way the Earth is. And then I think it needs to approximate a steady state long before it hits that limit. And so I think that's kinda the long run idea of steady state.

Now the idea, I think there are limits, you know, long before the macroeconomy hits that physical scale limit. Long before that happens, we experience the cost of growth rising faster than the benefit. Because we're sacrificing natural services that are more important than the production benefits that we gain.

I mean, you would expect this to be a normal consequence of classical economics - the law of diminishing marginal utility: you satisfy your most pressing wants first. So, you are going to run out of important things that you need. And the Law of increasing marginal cost: you do the easiest thing, you have access to the easiest resources first, so the cost will go up there.

So, you know, what we need is to be good economists, in the sense that we measure costs and benefits and are sensitive enough to recognize the economic limit to growth, to stop when growth becomes un-economic and not be so dumb or so insensitive that we have to crash headlong into biophysical limits and really get smashed.

As John Stuart Mill said, who was the classical economist who gave the fullest exposition and the most favorable exposition of the idea of a steady state, which they referred to as a stationary state, but it meant basically the same thing… He says it by no means implies any stationary state of human welfare. There will be as much room for moral and ethical and technical improvement as there was in a growth economy. And much more likelihood of it happening, in a way, because when you close off physical growth then the path to progress has to be moral and technological and intellectual and informational. You’ve switched the path to progress from this physical more and more stuff to a qualitative improvement of the same amount of stuff.

So, let’s do it, and if we're lucky it won't be all that costly. It will be a great deal of moral improvement because I rather expect that we will…it will go well in that way because the material, the attempt to satisfy our wants by material growth was a little bit like scratching in the wrong place. You know, you’ve got a real itch, but you are just clawing somewhere and it doesn't help.

So at least I think this will help us to scratch in the right place if we devote our attention to moral and technical progress.

It should not be difficult to recognize that humans are subject to the physical constraints of planet Earth. But how we make sure that we do not exceed our limit to the point of collapse (e.g., overshoot and collapse mentioned previously) is something that is debated, even by people with seemingly the same end goals. There is a branch of environmental (well, it's primarily economic) thought that is based on the power of free markets to most efficiently manage resources. This is often called free market environmentalism (FME). Those who advocate for FME believe that free markets (economic systems that are free from government regulation) are the best way to solve environmental problems. And, just as important, they believe that the government is much worse at managing resources than the market. This article from the Library of Economics and Liberty (a free market think tank) summarizes the school of thought pretty well.

As outlined in this article, this school of thought rests on three assumptions in order for markets to work for any environmental good (e.g., a forest, clean water, clean air, etc.): "Rights to each important resource must be clearly defined, easily defended against invasion, and divestible (transferable) by owners on terms agreeable to buyer and seller" (source: Library of Economics and Liberty). In other words, if a piece of property has:

I would add that (4) the author (and this is typical of FME) also assumes that the owner of the property is motivated to protect the property in anticipation of future profits.

For example, if I own a lake and someone pollutes it, if the courts are just, the polluter will end up paying me because (s)he compromised my ability to enjoy my property. If these conditions are known, then the polluter, in theory, will decide not to pollute in order to avoid the extra cost. As you can see, all of this relies on using money as the motivating factor.

This is a very sound argument as long as those conditions are met, at least in terms of environmental protection. This situation, and variations of it have been proven effective in a wide array of applications. It worked for water conservation in the Western U.S. And here are a number of case studies demonstrating that these principles can work.

But what if those four conditions are not met? With climate change, a fundamental question is: "Who owns the atmosphere?" (The answer: no one does.) If there is no clear ownership, the system may not work. Let's go back to my lake that got polluted, and think about a few plausible scenarios.

This article from the Property and Environment Research Center - also an advocate for free-market environmentalism - goes over a few of these and other examples where the system breaks down.

It should be apparent at this point that humans cannot continue to live beyond the planet's ecological means and expect to survive. We have one "Earth's worth" of replenishable resources, and as we diminish that stock of resources by using them faster than they can be replenished and/or emit wastes faster than they can be absorbed, we reduce our ability to survive. Many different ways to achieve such a steady state economy (or something close to it) have been posed. Some people, such as Herman Daly, propose using taxes, incentives, and other policy-based solutions. Others advocate unleashing the power of economic markets to solve the problem, mostly through privatization. Please note that even the most ardent advocates of regulation recognize that markets are extremely effective and efficient at allocating resources, but that they do not work well under a number of circumstances, e.g. when negative externalities artificially lower prices, and when impacts are not immediately felt (e.g. with climate change). Because of the massive externalities - particularly with regards to intergenerational equity, i.e. the impacts of today's actions will be felt by future generations - even free-market proponents recognize that it is not a problem that can easily be solved by markets.

Hopefully, by reading through and thinking about these issues, you will not simply take for granted that "growth is good," regardless of the circumstances or consequences. Daly himself concedes that growth can be good as long as it helps alleviate poverty, but ultimately we must reach a steady state economy if we are to establish a sustainable society.