As discussed in Module 5, soil is a complex matrix of minerals, air, water, organic matter, and living organisms. Historically, the emphasis in agriculture has been on reducing soil erosion. But since the 1990s, soil scientists and conservationists have recognized and described multiple valuable properties and ecosystem functions of soil that are referred to as indicators of soil quality or soil health. In 1997, the Soil Science Society of America's Ad Hoc Committee on Soil Quality (S-581) defined Soil Quality as:

"the capacity of a specific kind of soil to function, within natural or managed ecosystem boundaries, to sustain plant and animal productivity, maintain or enhance water and air quality, and support human health and habitation" (Karlen et al., 1997). 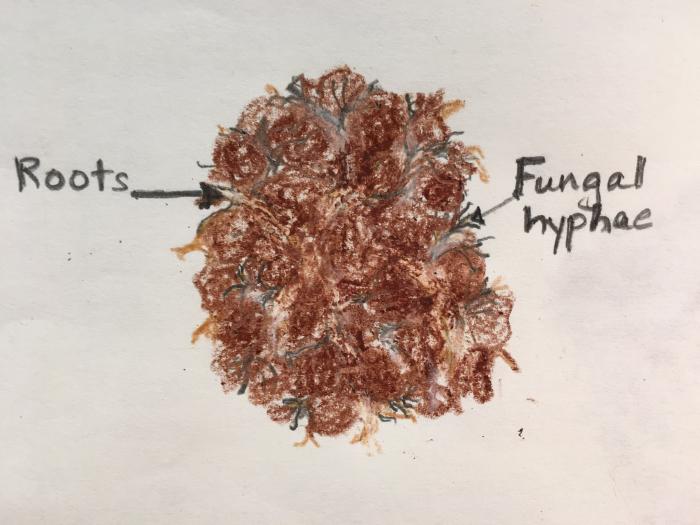 Chapter 1 (Healthy Soil) and Chapter 2 (Organic Matter: What it is and Why it’s so important?) from the book that you downloaded: Building Soils for Better Crops. Edition 3. Sustainable Agriculture Network, USDA. Beltsville, MD.

Then watch the following video about soil biology and list four kinds of soil organisms and how they influence soil.: The Living Kingdoms Beneath our Feet. (USDA NRCS).

Video: International Year of Soils July: The Living Kingdoms Beneath Our Feet (2:08)

Click for a transcript of the living kingdoms beneath our feet video.
Ever hear someone say, “plants feed the soil, so the soil can feed the plants”? It's taken me quite a while to process that. It's probably because I thought of soils like this, and that plant food only comes from a bag. There, an entire kingdom lies beneath our feet, all clustered around the roots, the rhizosphere, colonies of bacteria, fungi, nematodes, amoebas, pill bugs, springtails, millipedes, and earthworms. More than a ton an acre, together weighing about as much as their above-ground counterparts, grazers, browsers, shredders, decomposers, predators, and prey. In the soil, something will eventually become food for something else. The byproducts of all these life cycles, that's what feeds the plants. What powers these kingdoms? Solar energy. Carbon dioxide becomes sugars, goes to the roots and is exuded to feed and power these underground kingdoms. What is a living soil? It's where the plant and the soil are one. This is symbiosis at its best.
‹ Intercrops and Cover Crops up Module 7.2: Conservation Agriculture: A Systems Approach ›