On the previous page, we saw that the idea of carrying capacity is closely related to the idea of sustainability. Here we’re going to explore another closely related idea: resilience. Resilience is a property of systems related to how a system responds to a disturbance or stressor. In rough terms, the more resilient a system is, the larger a disturbance it can handle.

What qualifies as a state change depends on how we define the system. There are often many ways of defining a system, so there will also be many ways of defining its states and changes to them. We should have the mental flexibility to imagine systems and states being defined in different ways so that we can define them in ways that are helpful for our purposes, and so that we can understand how other people are defining them.

Given this understanding of system state, we can now define resilience with more precision.

Resilience is the ability of a system to maintain certain functions, processes, or populations after experiencing a disturbance.

Let's continue with the jar metaphor, and imagine that the jar is a system for holding sand. The system components would then be the glass jar, the lid, and the sand and air inside the jar. If our glass jar system is thrown at a wall with enough force, it will smash into little pieces and no longer be able to perform its principal function of holding sand (or anything, for that matter). But what if the force of impact was only strong enough to crack the jar without breaking it apart? In this case, one of the system components - the jar - is changed, but the system can continue to hold sand, and thus its system state remains essentially the same. The jar system's resilience, then, is the size of the impact it can withstand without smashing to pieces. Remember that disturbances always change systems in some way (otherwise we wouldn't call them disturbances). The more a system is able to maintain its functions and components after a disturbance, the greater its resilience to that disturbance.

With simple systems like the glass jar filled with sand, resilience can be (and often is) represented using the metaphor of a ball in a basin. If the ball is pushed a little bit, it will return to the bottom of the basin, i.e., to its initial state. If the ball is pushed hard enough, it will leave the basin and eventually settle somewhere else, i.e., in an additional state. The height of the basin thus corresponds with resilience: the higher the basin, the harder of a push the ball can withstand and still return to its initial state. Of course, this metaphor becomes less helpful with more complex systems that have many constituents, processes, and functions. In reality, most systems are only relatively resilient to most disturbances. Most complex systems are able to maintain some, but not all, components, processes, and functions after any given disturbance (as long as it is not catastrophic). In other words, resilience in real-world systems is usually relative to the type of disturbance and specific constituents, processes, and functions. 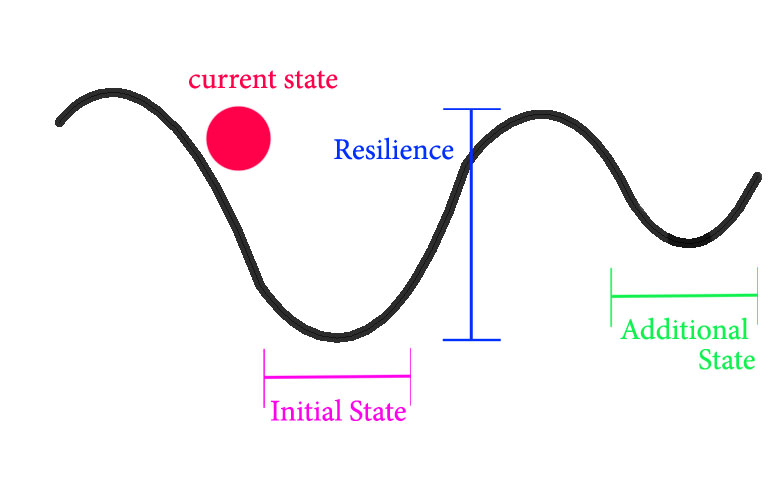 Figure 2.6 Resilience and State: The metaphor of a ball in a basin.
Credit: Yooinn Hong © Penn State University is licensed under CC BY-NC-SA 4.0

Resilience is often viewed as a good thing. If an ecosystem is resilient, or if human society is resilient, then they will be quite capable of withstanding the disturbances that they face. For any system to sustain any particular state, then the system cannot experience any disturbances that exceed its resilience for that state. Thus resilience, like carrying capacity, is closely related to sustainability. This is why we see efforts to enhance resilience from groups like the Resilience Alliance. They would like for our human-environment systems to be sustained.

But whether or not resilience actually is good is an ethical question, and the answer is not automatically yes. We’ll discuss ethics further in Module 3, but for now, consider this. An exploitative agricultural production system, such as one that sources labor from human-trafficking network, might be resilient if it can withstand efforts to dismantle it. In these two cases, resilience is certainly not a good thing. So, while resilience is certainly an important concept and may often be considered a good thing, we should not blindly assume that it always is.

Stability is a very important concept in agriculture. We would very much like it if our farms would yield (produce) about the same amount of food each year because in general, we eat about the same amount of food each year. If there is an unusually large food yield one year, this can cause complications but is typically not a huge problem. However, if there is an unusually small food yield one year, then this can be a huge problem. A famine can ensue, and people can die. In the food and agriculture module, we’ll examine yield stability in more detail. There, we’ll consider the Irish Potato Famine, which occurred in the mid-1800s. This was a case of extreme instability in food yield, which had disastrous consequences.

One might think that a resilient system would be one with more stability. However, this is not always the case. Sometimes, some instability can help increase resilience. This occurs when the disturbances increase the system’s ability to respond to further disturbances. For example, think of our bodies as systems. If we don’t exercise a lot, then we can’t do much exercise before we collapse. However, as we get more exercise, then there is an increase in our ability to withstand further exercise without collapsing. Here, the exercise is a disturbance, and collapsing is sending our bodies into a different state. As we exercise more, our bodies get less stability but more resilience. This often happens with other systems, too.

‹ Feedback Mechanisms up Population, Affluence, and Technology ›
GEOG 30N Environment and Society in a Changing World