A landscape, in this context, is not just the scenery that you view from a scenic lookout point. Instead, it is the combination of environmental and human phenomena that coexist together in a particular place on Earth's surface. Landscapes include physical features like streams, oceans, forests, and soils as well as human-constructed buildings, trails, fences, and mines. One emphasis of a landscape-based approach is that none of these features is entirely natural or entirely human. While the concept of “environment” often refers only to the non-human phenomena that humans interact with, the concept of “landscapes” refers to both human and non-human phenomena. Landscapes thus remind us that it is actually impossible to completely disentangle the human from the non-human.

A vivid example of a landscape that shows the close coexistence of humans and environments is the agricultural terrace. A terrace for agriculture is a system of steps built into a hillside to facilitate growing crops or grazing animals. Compared to agriculture on unterraced slopes, terraces reduce erosion, capture more water, and make crops easier to harvest either mechanically or by hand. Terraces are found in sites across the world, including the Philippines, Peru, and England. Terraces show the coexistence and coevolution of human and environmental systems. If the environment were not hilly, then humans would not build terraces. This is an impact of the environment on humans. An impact of humans on the environment is the terrace structure, which becomes an enduring feature of the hill itself. Clearly, humans and the environment are inseparably part of the landscape. In other words, the human part and the environment part are closely coupled. 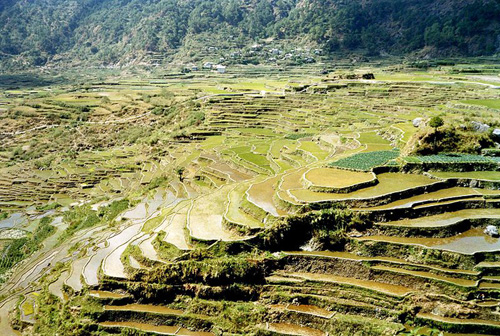 The famous geographer Carl Sauer (1889-1975) encouraged environmental thinkers to study the humanized environment (i.e., the environment as influenced by human activity) in terms of landscapes during the early and mid-twentieth century. This was a formative period in our understanding of the role of humans in environments. Sauer characterized the process of landscape creation as always ongoing and thus necessary to see in historical terms. He imagined a landscape being transformed through time from its original, natural form into a “cultural landscape” via the influence of human technologies and economies. As our understanding of the dynamism of human-environment systems has evolved, geographers have continued to recognize the importance of history while building a new emphasis on the recursive relationships (interactions in both directions) within the human-environment landscapes. We cannot simply think about how humans have shaped a landscape, we must also think about how the natural features have enabled and constrained human efforts. This bi-directional interaction, or coupledness, is why we study landscapes as a human-environment system.

A dynamic historical perspective also reminds us that there is no pre-determined way that a human-environment landscape will evolve or should evolve. For example, Iowa was not destined to become “the corn belt.” Its emergence as that type of cultural landscape was contingent upon the historical interactions between particular cultural values, economic systems, and environmental conditions. The ability for you to conceive landscapes that are multi-layered, recursive and contingent will enrich your studies of human-environment systems.

One final important feature of a landscape-based approach is the emphasis on perception. Geographer Donald Meinig (1924-2020) writes that "any landscape is composed not only of what lies before our eyes, but what lies within our heads." Landscapes aren’t just “out there” waiting for us to interact with and learn from them. Instead, our interpretations of landscapes are shaped by our own preferences, needs, and experiences. In other words, we mentally “construct” landscapes based on our perspective. For some, a particular landscape of coastal environments may represent environmental preservation. For others, it may reflect recreation. For still others, it may evoke labor and oppression. This means that when we study a landscape, we have to be careful not to imagine that we immediately see all that is there or that our initial perceptions are correct.

‹ Introduction up What Are Coupled Human-Environment Systems? ›
GEOG 30N Environment and Society in a Changing World