What are feedback mechanisms and how do they work?

This phenomenon of system components both impacting each other creates a feedback loop. Feedback is an impact to a system component that is a consequence of an action performed by that component. For example, suppose you take the action of writing an email to the instructor, asking a question about the course. The email you get back is a feedback. A loop is a circumstance in which system components impact each other, such that an action by a component affects subsequent performances of that action. This circumstance has a circular, loop-like appearance in a systems diagram, as seen in the diagram above.

There are two basic types of feedback: positive and negative. A positive feedback loop is a circumstance in which performing an action causes more performances of the action. For example, suppose that every time you emailed the instructor with a question about the course, the instructor wrote back with an email so confusing that you had even more questions about the course, which cause you to write two emails back for more clarification. This would be a positive feedback loop.

A negative feedback loop is a circumstance in which performing an action causes fewer performances of the action. For example, suppose that every time you emailed the instructor with a question about the course, the instructor wrote back in an email that clarified the entire course for you, so that you had fewer questions about the course and thus wrote fewer emails for clarification. This would be a negative feedback loop.

Now that you have read a bit about what feedback loops entail, here are a few multiple-choice questions that will test your understanding of the differences between what a feedback loop is, and whether it is positive or negative feedback. These should be very simple questions and the purpose here is to give you some confidence in understanding this material so far.

Come up with an answer to these questions by yourself and then click below to reveal the answer.

2. Exponential population growth is an example of:

3. Body temperature control is an example of:

4. Population regulation is an example of:

The plusses here signify that each set of parents brings more children, and each group of children brings more parents. If the birthrate is constant over time, and if each generation is larger than the previous, then there will be exponential population growth, as shown in Figure 2.10 in the Marten reading “What is Human Ecology?” But population can’t maintain exponential growth forever. To do so would require an infinite amount of resources, but we live in a finite world. Here’s where the negative feedback loop comes in. The resources provide sustenance to the population: food, water, energy, or whatever other resources are being used. As the population runs out of resources, it can’t have as many children – or, the children can’t grow up to become parents.

It is important to understand that the carrying capacity refers to the largest population that can be sustained over the long-term. Carrying capacity is not constant and varies over time in response to changes in the environment. For example, disturbances from extreme natural events (e.g., volcanic eruptions) and human activities (e.g., pollution) can alter the environment to a great extent and consequently influence carrying capacity.

A vivid example of population overshoot is found in the story of the reindeer that briefly lived on St. Matthew Island off the coast of Alaska. Please read the story in the following two articles by Ned Rozell:

As you read this, consider the following questions. When and why did the population crash occur? How could it have been prevented? Is the human population destined for the same fate? Why or why not?

Here's a graph showing the reindeer’s exponential population growth and dramatic decline. As you examine the graph, consider how the graph relates to the story and to the concept of feedback mechanisms within a system. 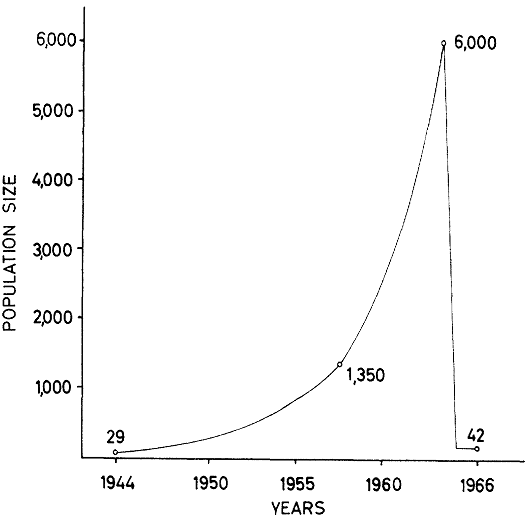 The full article is available via Penn State e-journals, in case you're interested in reading it.

A key question in GEOG 030N – perhaps the key question – is whether today’s human population is sustainable. You might try to answer this question by comparing the human population to Earth’s carrying capacity for humans. But this is not an easy answer to provide! One reason is that the global human-environment system is very complex. Another reason is that human activity is changing the carrying capacity, in both positive and negative ways. In fact, it is important to consider whether the carrying capacity concept (which was developed to model non-human populations) can actually be applied to humans. Our behavior and consumption habits do not follow the same rules and patterns that we see in non-human populations. Many of the new technologies that we develop enable us to support larger populations, thereby increasing the carrying capacity. Some things we do such as unchecked timber harvesting deteriorate our resource base, lowering the carrying capacity. We also have economies, social and cultural customs, and government regulations that can influence and change resource use in both positive and negative ways. Given all this, no one is sure just how many people can be sustained on Earth over the long term. But we can get some important insights by studying human-environment systems, as we do in this course.

‹ What Are Coupled Human-Environment Systems? up Resilience and Stability ›
GEOG 30N Environment and Society in a Changing World