There is one more point to consider about the GDP map shown earlier: It only shows one point in time. The map tells us something about development around the world today, but it doesn’t explain how we got here. Even the Rosling video, which shows an animation over time, doesn’t offer much in the way of explanation. This leaves out the important question: Why is it that some countries are more developed – or at least have more money – than others?

Understanding the patterns of development we see today requires understanding the history of development around the world. Historical geography is the study of the historical dimensions of our world and is very important here. It turns out that certain aspects of the environment have played important roles in the history of development on Earth. This is a very old story, and it’s worth starting at the beginning: at the origin of agriculture. Agriculture is an important starting point for development because the increased food supplies enable larger populations and enable some people to devote their time to tasks other than producing food. This labor specialization is necessary for the diverse other human activities required for development.

But all agriculture is not equal. Some agriculture is more productive than others. Likewise, some of these regions where agriculture originated are likely to develop more successfully than others. Key factors include the region’s growing conditions (including temperature, precipitation, latitude, and soils) and the types of plants and animals available for planting and domestication. Many regions had good growing conditions, but of all the regions in the world, one had especially rich plants and animals to use. That region is the Fertile Crescent, which is located in the Middle East as seen on the map above.

Guns, Germs, and Steel is a Pulitzer Prize-winning book written by geographer and physiologist Jared Diamond. In the book, Diamond seeks to answer a question posed to him by a man in Papua New Guinea: Why does Diamond have so much more “cargo” than the Papua New Guineans? “Cargo” here essentially means “stuff,” including advanced stuff like helicopters. Note that Papua New Guinea has had agriculture for a long time – it is the green space located just north of eastern Australia on the map above. Why didn’t Papua New Guinea’s agriculture lead to advanced civilization as it did elsewhere? The explanation that Diamond comes up with is that Papua New Guinea had less “geographic luck:” It had less in the way of resources conducive to successful agriculture, in particular, plants and animals. In contrast, the Fertile Crescent had better resources.

In order to learn more about Diamond’s ideas, please watch part of the National Geographic video made based on Guns, Germs, and Steel. Please begin at Episode 5, at time 4:30. Then watch Episode 6 from the beginning through time 8:25. As you watch the videos, consider this: What are the major parts of Diamond’s arguments? What are critiques that others have made? How does Diamond respond? Is his response successful? 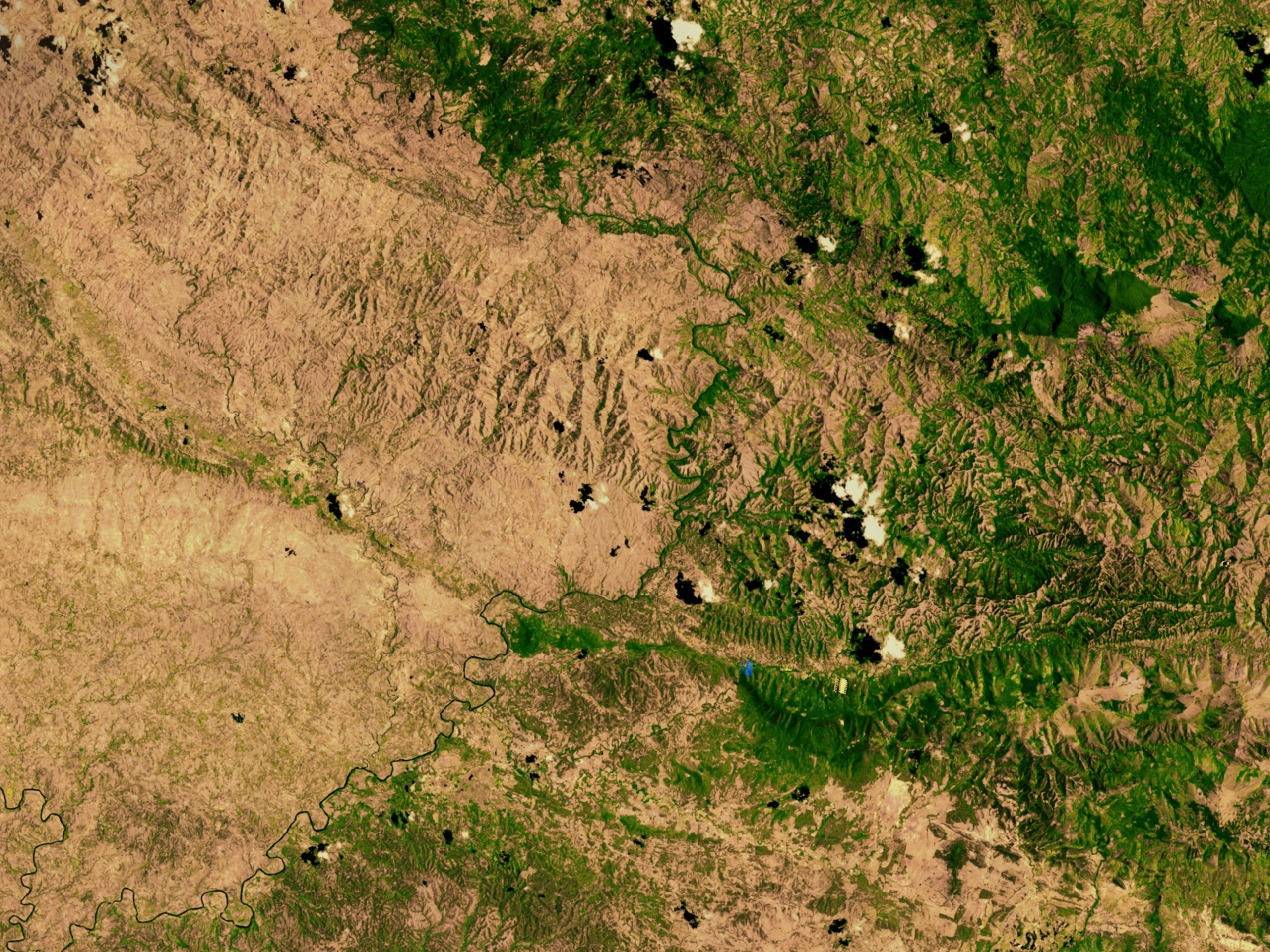 In this image, Haiti is on the left and the Dominican Republic is on the right. This part of Haiti is almost completely deforested, as is much of the rest of the country, but the deforestation ends abruptly at the political border. From our systems perspective, this is clearly humanity impacting the environment, not the environment impacting humanity. What is important to understand is that the patterns of development that we see have both environmental and social causes. The environment can explain some of why advanced civilization emerged on Eurasia instead of elsewhere, but only social factors can explain why, for example, the Dominican Republic is richer than Haiti or South Korea is richer than North Korea. In other words, environmental resources can contribute to development trajectories, just like many other geographic factors such as culture, climate, topography, proximity to major waterways, etc. But no single one of those components is ever the determining factor.

Environmental determinism came to prominence in the early twentieth century but its popularity declined over time. This is partly due to its shortcomings, and also a recognition that it was often used as a justification for colonial conquest and slavery. In contrast to the unidirectional conceptualization of human-environment relationships, environmental possibilism arose as a mild notion where the environmental constraints are still recognized but the freedom and capability of humans to change and structure the environment are highlighted. Environmental determinism and possibilism represented geographers’ first attempts at generalizing what accounts for the pattern of human occupation of the Earth’s surface in modern times.