While GeoDa is like a GIS, you will soon find its cartographic capabilities somewhat limited. Where it really comes into its own is in the integration of spatial analysis methods with mapping tools.

To determine the spatial autocorrelation of a variable globally across a map using Moran's I, you access the Space - Univariate Moran's I menu. However, before doing this, you need a representation of the contiguity structure of the map, that is, which map units are neighbors to each other. This provides the wij values for the Moran's I calculation to determine which pairs of attribute values should be included in the correlation calculation. 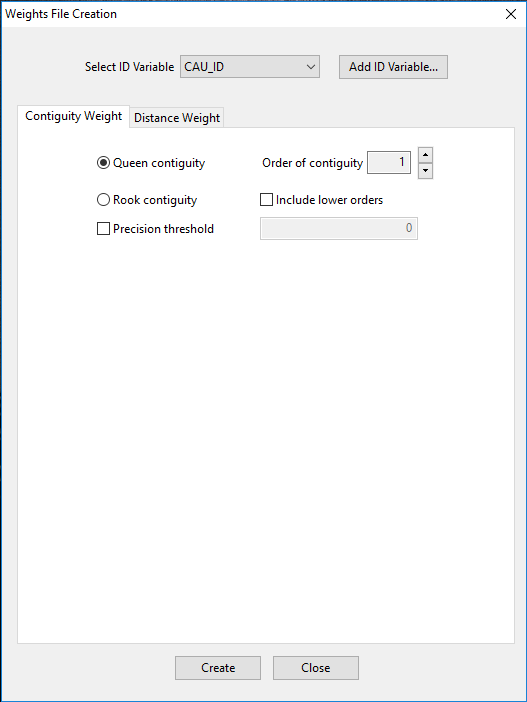 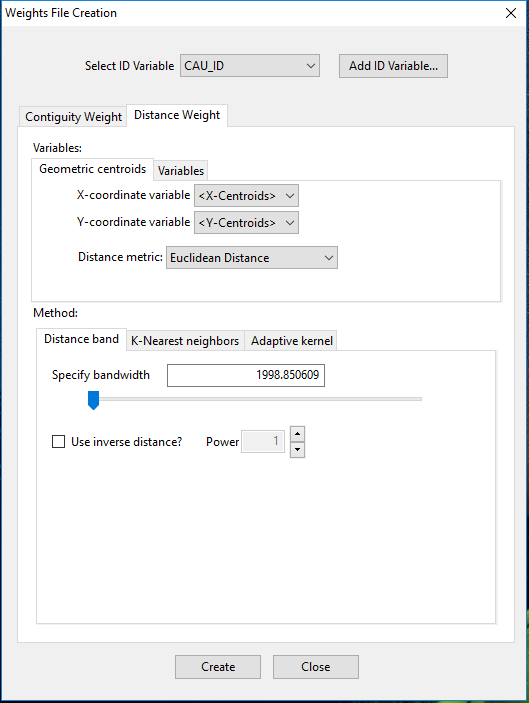 The various options available here are explained in the GeoDa documentation. For the purposes of this project, I have already created simple contiguity matrix files called ak_CAU01.gal, akCity_CAU01.gal and akCity_MB01.gal. Use the Weights Manager to load the .gal file that matches the shapefile you have added to the project.

It is instructive to examine (but don't edit!) these .gal files in a text editor. For example, if you open akCity_CAU, the first few lines look like this:

The first line here shows how many areal units there are in the associated shapefile, in this case the 101 CAUs in Auckland City. Each pair of lines after that has the following format.

A more complete explanation of alternative formats for GAL and GWT formats (the latter allows weighted contiguities based on inverse distance and so on) is provided in the GeoDa documentation.

NOTE 1: The real reason I have provided pre-calculated GAL files is that the previously mentioned problem with the CAU shapefiles (see the previous page) prevents some versions of GeoDa from successfully calculating them itself. I was able to get around the problem using R with the spdep, shapefile and maptools packages. If you ever face a similar problem, you may also find this helpful. spdep provides a method for calculating GAL files that includes a tolerance, so that areal units within a specified 'snap' distance of one another are considered neighbors.

NOTE 2: In some versions of GeoDa, you may get a warning that the .GAL file relies on 'recorder ordering' rather than an ID variable, and suggesting you make a new weights file. There is no need to do this – the provided GAL file will work fine.

NOTE 3: More recently, it has become possible to create spatial weights matrices in ArcGIS, although these follow their own file format. If you want to pursue this, try the Spatial Statistics Tools - Modeling Spatial Relationships - Generate Spatial Weights Matrix script.