Project 4: Calculating Global Moran's I and the Moran Scatterplot

This is easy. Select the Space - Univariate Moran's I menu option and specify the variable to use, and the contiguity matrix to use. GeoDa will think for a while, and then present you with a display that shows the calculated value of Moran's I and a scatterplot (Figure 4.2). 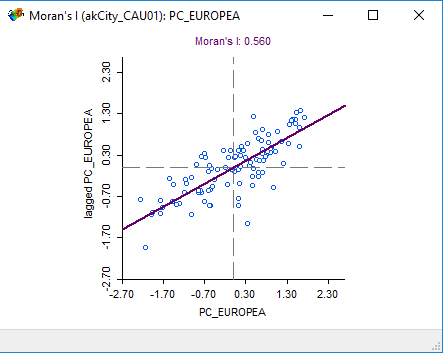 Figure 4.2. Moran scatterplot showing relationship between a variable and the average value of its neighbors for the same variable
credit: Griffin

The Moran scatterplot is an illustration of the relationship between the values of the chosen attribute at each location and the average value of the same attribute at neighboring locations. In the case shown, large Percentages of Europeans (points on the right-hand side of the plot) tend to be associated with high local average values of Percentage of Europeans (points toward the top of the plot).

Using linked brushing, you should be able to identify which areas of the map are most responsible for high or low observed spatial autocorrelation, and which, if any, locations run counter to the overall pattern.

For a single variable on a single map, describe the results of a global Moran's I spatial autocorrelation analysis in your write-up. Include a choropleth map and Moran scatterplot in your write-up along with commentary and your interpretation of the results. In particular, identify map areas that contribute strongly to the global outcome.